We’re in the middle of a season full of big releases, but a few smaller ones are extremely worthwhile as well. Today, we check out Bonfire Peaks, Skeletal Avenger and Astria Ascending.

Developed by Corey Martin and published by Draknek, Bonfire Peaks is a great little indie puzzler that’s out for PS4, PS5, Switch and PCs – our take is based on the PS4 version.

On a surface level, you might mistake Bonfire Peaks for a typical box sliding-esque puzzle game that happens to feature a unique visual style with its voxel art graphics, but this one has some stellar gameplay to back up that admittedly wonderful atmospheric style as well.

Looking beyond it, the core premise appears simple, but the gameplay was designed to gradually build out its mechanics from there. Your task is to simply burn a box of crap in each level, but of course that’s easier said than done. In grid-based 3D environments, increasingly challenging obstacles stand in the way of you getting rid of your junk, and what starts out as simply using a box as a stepping stool quickly grows into a very diverse and fun puzzle game.

The game does a good job of introducing its mechanics organically, teaching you the basics before letting you experiment with new things. The overworld facilitates this as well, as parts of it are locked until you clear enough levels – thus guiding your progression in a gradual way even though you have a certain degree of freedom to tackle stages in the order you prefer. This also allows you to skip puzzles that are a bit too challenging, keeping things from getting too frustrating because you can return to it a little later with fresh insights. 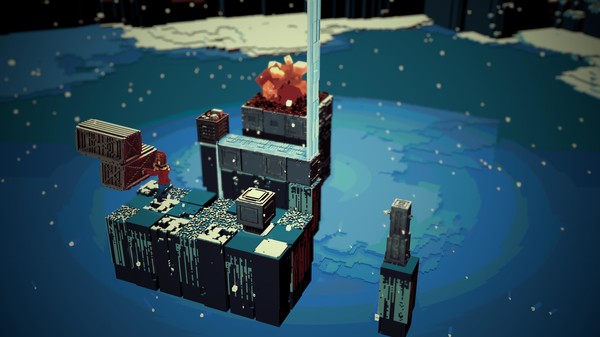 Puzzle enthusiasts will recognize that although Bonfire Peaks has a unique premise and setting, it uses familiar mechanics. The traditional conveyor belt to move stuff is a flowing stream of water here, for instance. This will make puzzle fans feel right at home, even though Bonfire Peaks has some great puzzle designs that make it feel unique – and gives players plenty of content as well.

Add a beautiful atmosphere to that, and you’ve got one of 2021’s best puzzle games here. Audiovisually unique and attractive, and rock solid puzzle design – this is a must for players who enjoy these games.

It’s always fun to see a developer evolving, and 10tons is a good example. Their early titles were firmly rooted in the casual/mobile realm, with fun games like Sparkle and King Oddball, but later games like Jydge explored other genres like the top-down twin stick shooters. Skeletal Avenger taps into the popular roguelite market, and we played the PS5 version of it. 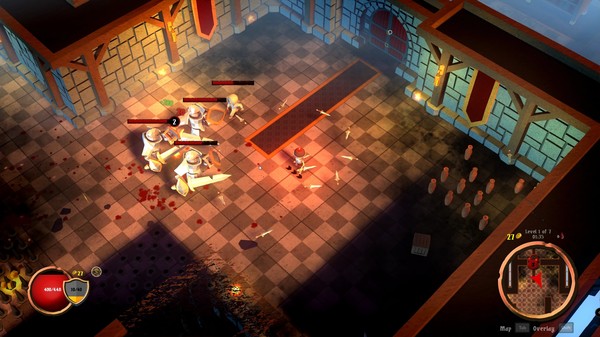 With a Medievil-like protagonist, you play as a skeleton that’s come back to life and has to figure out what happened prior to your death, and who was responsible. There are roguelite mechanics at play here, but the game is quite lenient in only making you lose your gems (one of the in-game currencies) when you fall in combat. You can then pick a new skeleton to go back into battle with – with your choice of warrior coming with its own individual perks.

As with previous games by 10tons, the game has easy to understand controls, with a light and heavy attack serving as your main choices in combat. You can also dash, but that move can’t be spammed as it uses a charge system that makes sure you only use it when in a pinch or when moving in for a quick attack before dashing away again. Another good tactic is to bring in a friend, as the game supports two player co-op – though it helps if you have roughly the same ability level because if one of you falls you both get sent back to the starting crypt.

The main roguelite mechanic here is that coins stay with you when you die, which lets you get stronger through upgrades – letting you push on further and further. It’s a rather formulaic take on the genre that doesn’t feature groundbreaking visuals either – with relatively simple, almost cartoon-like graphics. As a roguelite it’s quite functional and those looking for their next fix will have fun with it, but the fact that Hades launched on PlayStation not too long ago doesn’t do it any favors.

Developed by Artisan Studios and published for all major platforms by Dear Villagers, Astria Ascending is a gorgeous JRPG-influenced game with a hand-drawn art style and an epic narrative. It leaves a great first impression, but there are a few stumbling blocks that keep it from being truly great.

The JRPG influences are easy to spot, and hardly a surprise when you consider that some of the developers previously worked on Final Fantasy. Astria Ascending is a completely new IP though, and the game takes place in Orcanon – a fantasy world with many different races, from which people are chosen every three years to serve as demi-gods. After a three year period, their term is up and they have to leave the world behind – something that doesn’t sit well with some of the current eight members of the group.

You control the (members of your) party of demi-gods on a quest after the main city in Orcanon is attacked by monsters, but unfortunately the epic premise doesn’t result in the most engaging of narratives. There isn’t a lot of character development beyond stat upgrades, and they bicker too much among themselves to find the cast particularly endearing. The main story fares a little better, but ultimately follows too many JRPG tropes and feels predictable.

The gameplay feels a lot better though, with typical turn-based JRPG combat but also elements that include platforming and puzzle solving, which makes for nice diversions rarely found in a JRPG. Combat is still the bulk though, and has been well implemented. A focus system lets you boost certain attacks, and every character has an expansive branching skill tree that gives you access to new attacks and abilities.

The game is also highly customizable, letting you tweak some of its mechanics from the menu, which makes for some replay value as well as a good way to tailor the experience to your own preference and/or desired difficulty level. It’s certainly welcome, because some of the latter can come from excessive grinding if you’re not careful – though optional side quests can help to make that feel more interesting.

At the end of the day, Astria Ascending struggles to maintain that first impression it makes with its audiovisual style. A few technical issues hurt your enjoyment as well (such as disappearing questlines), so hopefully this’ll receive a bit more post-launch love as well. Our suggestion would be to keep an eye on post-launch updates before buying, just to make sure it lives up to its promise.