Blaze and the Monster Machines: Axle City Racers is out now for PlayStation 4, Xbox One, Nintendo Switch and PCs, and provides youngsters with a kart-racing experience that’s designed for those not quite ready to tackle Mario Kart just yet. Here’s our take on the game.

Of course, this wasn’t our first time going hands on with Blaze and the Monster Machines – we got to play it during Outright Games’ recent Unwrapped event as well. We played the 3DClouds-developed racers through a streaming connection that time though, so this was the first time we got to play it running locally – and in multiplayer mode.

Based on the popular Nickelodeon show, this is a game that is clearly aimed at younger kids – those between the ages of 3 to 6 will probably have the best time with this, although there are a few control settings that make it possible to tailor the experience to those with different gaming abilities. The main mode is an adventure mode, though that’s using the term lightly. In it, you’ll make your way through a series of ten races before progressing to a final racing event. While that one takes place on an oval-shaped track, the previous races are in diverse environments that look quite a bit like what you see in the TV show. 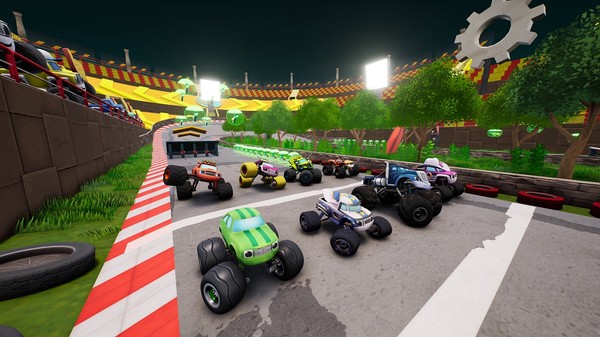 That same can be said for the characters, as you can select from a number of favorites from the show in addition to main star Blaze. They have different special abilities (Blaze has a powerful boost, for example), but other than that they control more or less the same – a slower type of kart racer with wide vehicles that make it harder to swerve out of control. For the youngest players still struggling, you can even turn on auto-drive to have them feel like they’re competing until they’re ready to take the wheel themselves.

With its short adventure mode, the biggest lasting appeal can be found in the game’s four player split screen action – which is for local play only and provides a rare opportunity for family with very young players to race together. Those a little more experienced will gladly use the drifting and boosting mechanics, while others are happy to just steer their colorful monster trucks around the track.

Sure, it’s no Mario Kart, and families that are already into that game will find that Blaze and the Monster Machines: Axle City Racers is an unnecessary step back. This is a learning experience, and an educational one at that. A kart racer with training wheels attached, and one that presents players with interesting physics/science tidbits during loading screens (which are read out loud as well). There are boost pads, things to pick up, but ultimately the game itself is a simple version of a typical kart racer with an attractive license for those with Blaze fans in the household.

We definitely felt that Blaze and the Monster Machines could and should look and perform better though. For a game that features a four player split screen, it’s strange that the single player mode suffers from less than optimal performance and doesn’t look as sharp as you’d expect on a PlayStation 4 Pro. Hopefully those technical issues can be fixed post-launch, even if they’re not likely to bother the target audience.

For them – little ones not quite ready for Mario yet – this is a solid way to spend some family time playing a videogame together with older siblings and parents. They, on the other hand, shouldn’t set their expectations too high. If seeing and playing as Blaze is an exciting enough prospect in your household, this will do nicely.