It’s time to once again shine the spotlight on a few exciting new (and one upcoming) VR releases. We checked out Vertigo’s Unplugged, Spacefolk City and Little Cities.

When finger tracking was announced as an experimental feature for the Quest headsets and got slotted into the mainstream system software not long after, it was only going to be a matter of time before games started using it. The Curious Tale of the Stolen Pets received an update to support it, but Unplugged feels like the first game to actually base its entire concept around it. How well it would work was a big question mark, but with the VR pioneers at Vertigo on development duty we were certainly curious to try it out first hand.

While VR is no stranger to rhythm-based games, Unplugged is the biggest ode to the classic Guitar Hero formula thus far while also paying homage to the classic notion of the air guitar. That’s reflected in the tracklist as well, because the game is full of tracks like Should I Stay Or Should I Go and features artists like Lynyrd Skynyrd and Tenacious D.

It felt a little strange to put the Touch controllers aside for Unplugged, but hand tracking works really well – even down to accurately reflecting which fingers you’re holding down and which are up – and where your other hand is that needs to strum the guitar. For guitar novices, it’s actually a bit daunting, as it’s less forgiving than the old Guitar Hero formula – which ultimately was just about button presses at the right time.

Don’t expect to be running around a virtual stage jamming away though – for Unplugged’s hand tracking mechanics to work you need to stay put so that the game can accurately scan your hand and finger movements. You’ll also need to factor the inside-out tracking of the headset in, as without a controller in your hand you’ll need to make sure that the headset sees what you’re doing. The end result is a somewhat stationary experience that can feel at odds with the nature of the songs you’re playing, but we didn’t mind because we were too busy trying to focus.

There’s definitely a learning curve to all this as well, as songs and control mechanics become more complex over time as you get comfortable enough to try out higher difficulty levels. For guitar novices, you actually get a sense that you’re learning how to play – though how well that carried over to the real world remains to be seen. Regardless of that, however, getting better feels satisfying, and comes with in-game rewards as well.

Something that feels slightly at odds with the above is that points also generously get doled out at the end of a track by just waving to the crowd when you’re done. When hand tracking works so well that you feel like you actually get rewarded for a skillful performance, it’s strange to score a ton of points for something so basic – which takes the fun out of the leaderboards as well, though we could see this being fixed in a future update for a more “pure” representation of skill. This is a good new take on the rhythm-based genre though, and an excellent showcase for hand tracking technology.

Spacefolk City, from developer Moon Mode and publisher Beyond Frames, is a VR take on the popular city building genre with a sci-fi premise and an accessible control system and user interface.

There’s a colorful aesthetic to the game as well, but underneath that exterior is a pretty grim narrative setup. The titular Spacefolk are a cute folk, but they’re facing extinction because their sun is about to swallow them whole. That sounds kind of apocalyptic, but Spacefolk City is a cheerful kind of game that can even be enjoyed by younger players – with the main narrative twist being that you’re looking to escape your solar system before it’s too late, which affects what you need in your growing city that floats in the vastness of space.

The campaign has been divided into eight levels, which gradually increase in complexity and challenge and start out with tutorial objectives to help you learn the ropes, and when the campaign wraps up you can also play in sandbox mode. Whichever mode you play, the “floating in space” nature of your city means that it’s easy to use motion controls to click things together and rotate your view without having to worry about the natural environment around you like you would in a regular city builder.

You power buildings by placing generators near naturally occurring electric clouds, which then creates an area in which you’re allowed to place whatever you want. Mini-hubs are created around these generators, but you can use ziplines to help Spacefolk get around in between these hubs as well. Electric clouds are a limited commodity, so expansion isn’t infinite, which forces you to make choices – even in sandbox mode, where it feels more like a restriction than it does in the campaign. 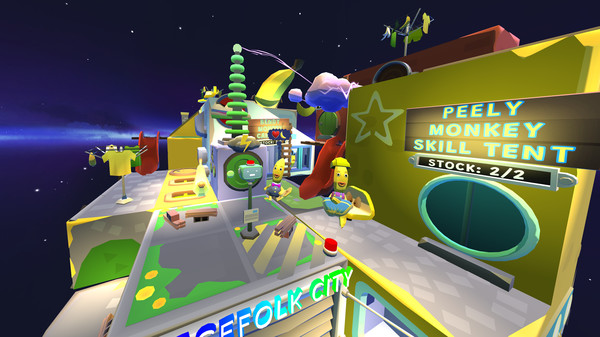 To build, you need to “mine” for resources, which you do by grabbing asteroids from outer space in a fun and imaginative use of motion controls. Your citizens are equally imaginative, and will (for instance) look like a banana or hot dog – each of which has unique living needs and preference, and the cosmetical items you gain from mining asteroids will help you cater to them.

Certain buildings will boost your city’s status and provide boosts to its citizens, and decorating buildings makes them suitable for specific Spacefolk. Upgrade your building, and your buildings will suit more citizen types as well. You can also invest in buildings that will improve your economics or defense rating, or push you further towards being able to leave. Sandbox mode also oddly has this end state where you leave the solar system, so hopefully that’ll get patched to let you keep improving and enlarging your city without the threat of a supernova. 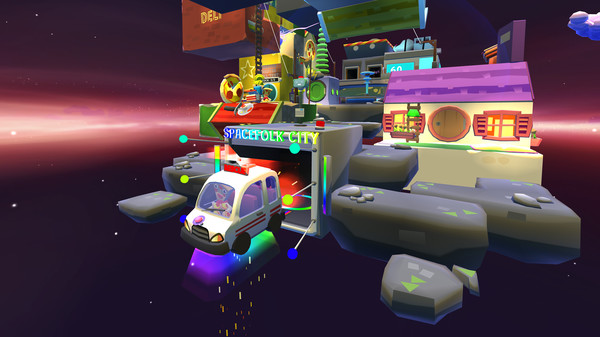 Spacefolk City isn’t as involved as city builders like Cities: Skylines, but works great in VR because of it. With a simplified UI and easy to use controls, this is a sci-fi “lite” city builder that’s enjoyable despite not being designed for lengthy/long term play. If you enjoy city building in a “quick fix” format, then this one will serve you just fine.

City building games might be a rare sight on in VR, but here we are – suddenly looking at two of them in a single roundup. Little Cities was recently announced by indie developer Purple Yonder, but it was the fact that nDreams was behind it as a publisher that really caught our eye. After all, nDreams was also responsible for the excellent Phantom: Covert Ops and this is the first release in a publisher-only role for them.

The full game isn’t out until next year, but we’ve already been able to go hands on with it and get a taste for it. And while Spacefolk City takes a sci-fi approach to the genre, Little Cities is a bit more traditional and closer to the classic SimCity or Cities: Skyline experience – though with the accessibility that you need in order to make something that works in VR.

It does feature all the familiar city building concept you’d expect though, including the need to keep your citizens happy, manage your economy and keep the wheels of industry turning. You’ll also need to supply basic amenities like power and water, and people will simply pack up and leave when you don’t provide a nice enough place to live for them.

The scope of Little Cities certainly is impressive, and you gradually unlock new building types as well. As your toolbox grows, so does your city, which feels very much alive when you zoom in and see people moving about living and doing their jobs. At the same time, there’s less micro-management than in games like Skylines, allowing you to sit back and enjoy what you’ve created instead of constantly being on top of things.

One of the tricky aspects of creating a fully fledged city builder in VR is not having a ton of menus to navigate – something that’s an integral part of most PC-based city builders. Even though our preview build was limited in terms of content, we could already see how the developers at Purple Yonder are planning on tackling this. A lot of the gameplay is mapped to an in-game watch and its interface, letting you keep track of what needs your attention and giving you access to categorized buildings and features you need. As the game expands throughout its development, so will its cities, so we’re hoping this won’t mean that we need to constantly look at said watch. It’s too much fun to be down there in the city itself, and the preview build we played captured that balance quite nicely. One to watch.