We still have to wait and see how Atari’s plans with the VCS will turn out, but we’re liking their approach of taking some of their classic arcade titles and giving them the reboot treatment – or the recharge treatment, as they’re calling it themselves. Black Widow: Recharged is out now for PCs and consoles, and comes just a short while after Centipede: Recharged. Developed by Adamvision Studios and SneakyBox, we checked it out on a PlayStation 4.

As a piece of pop culture history, and ignoring the Marvel universe for a minute, Black Widow isn’t the household name that Centipede is. It’s a landmark title for twin stick shooter fans though, as it was released back in 1982 alongside games like Robotron: 2084 – which as a name in gaming history has endured a little better. Black Widow’s gameplay is still as intuitive as ever though, casting you as a spider in a web where you shoot at insects trying to reach you – sitting in the middle. In a way, it’s a little reminiscent of games like Tempest as well.

Different enemy types makes for some diverse gameplay, as some enemies will lay eggs while others deal tons of damage by exploding near you. The new recharged version adds weapon power-ups and a super powerful bomb attack that wasn’t in the original game and gets activated when you charge it up. They’re small but meaningful changes, and they help bring the game to a new generation.

Other modern conveniences that are more geared towards replayability and console play include scenario-driven challenges, and online leaderboards add a bit of arcade flair to these. What’s also fun is the ability to play locally with a friend, which definitely adds to the game’s lasting appeal. It’s still going to be a game that’s best enjoyed in short bursts though, as runs are going to feel repetitive after a while – something inherent to its arcade roots. It’s a more than solid update to a classic though, and we enjoy the neon wireframe look as well. We look forward to where the Recharged series is going next.

The Space Moth: Lunar Edition is essentially a revamped version of Space Moth DX, which came out almost six years ago. This one’s getting a much wider release though, and we got to play it on a PlayStation 4 after previously playing the original game on Steam.

We already knew developer 1CC from their work on Star Hunter DX, which launched recently. This Lunar Edition introduces the multi-colored bullet system from that game to Space Moth as well, which is definitely a visual improvement as it doesn’t clog up the entire screen with large round bullets of the same color – something that can make it harder to weave past them.

New and reworked enemies and backgrounds also add to the visual identity of the game, while making sure it retains its “retro” look and feel – one that still feels kind of close to some of the classic shooters by Cave, which must have served as a source of inspiration for 1CC. If you enjoy the look of games like DoDonPachi, you’ll feel right at home here.

More subtle tweaks are found under the hood, with a new scoring system that’s flexible in the sense that it adapts to your skill level – adapting in a way where scores go up exponentially once you start to master the game’s patterns and boss fights. If you’re looking for a new arcade shooter and hadn’t played Space Moth before, then the release of the Lunar Edition is a great reason to check it out.

Milli & Greg, developed by 2ndBoss and published on consoles by QUByte, is a fun little platformer that’s available for all major systems at a budget price point. With over 100 levels to tackle, it takes a few pages out of the Super Meat Boy and Celeste playbook for a slightly generic but fun challenging platformer.

While the title for Milli & Greg would suggest a co-op adventure of some kind, Greg is actually your cat and acts mainly as the end goal for each level – reaching him is akin to getting to a portal, exit door, or whatever marks the end of a level in other platformers of this type. There’s a bit of a cat theme to some of the in-game collectibles too, but other than that this is a fairly typical platformer if you ignore the cat love that Milli has. 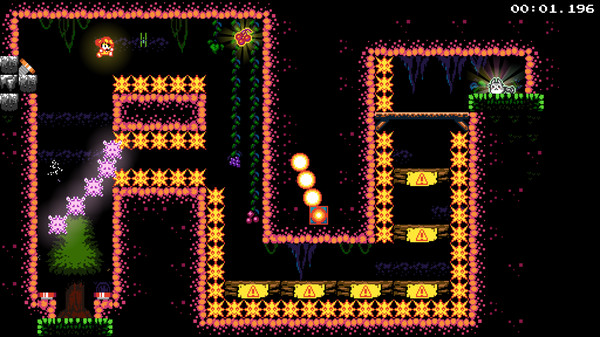 Gameplay is all about small but challenging levels that you can tackle with a simple moveset – but one where memorization and timing are everything. Milli can run and jump, temporarily grab hold of walls, and dash – even in mid-air. There’s only one dash per jump though, so you’ll have to use them wisely. You know – to avoid “death by spiky ceiling”, for instance.

Levels are well-designed by don’t offer anything we haven’t seen elsewhere. There are plenty of them though, and there’s some replay value in trying to complete levels while grabbing all of the collectibles inside as well. Everything’s rendered with an 8-bit look and feel, though with some modern visual effects that push it a little towards the 16-bit side. All a bit formulaic, but if you enjoy challenging retro platformers, then Milli & Greg will do nicely.