Rebellion’s Sniper Elite series has arrived at its fifth main entry in the series with the launch of Sniper Elite 5 for PC, PlayStation and Xbox – we couldn’t wait to check it out.

The Sniper Elite games have been around since 2005 (the days of the original Xbox and PS2), but it’s been five years since Sniper Elite 4 launched. Not that you’d notice though, because there seems to be a near-constant stream of content coming out for the franchise – we just checked out the last piece of DLC for spin-off title Zombie Army 4 a few weeks ago. There is little doubt that Sniper Elite 5 will follow a similar pattern when it comes to DLC and season passes, but after last year’s Sniper Elite VR we were excited to go hands on with a brand new entry in the franchise again.

If we don’t count games like Hitman, fans of sniping generally have two choices – Sniper Elite and Sniper Ghost Warrior (Contracts). The latter is a much more serious approach to the life of a sniper, requiring careful planning and an ability to factor in variables like wind and elevation with a high degree of realism, while Sniper Elite simplifies the experience – favoring adrenaline and generally a larger body count over a life in the shadows. With Sniper Elite 5, those who were missing the opportunity to go for a more stealthy approach are well catered for.

With bigger maps than before, and some gorgeous environment (the game takes place in France), this is a sequel that definitely pushes the franchise forward – even though it does so in small increments. The scenery is wonderful though, and (as with the Italian setting that came before) offers plenty of variation. From industrial areas to luxury accommodations and from quaint towns to nazi bunkers, there is a lot to see here – very often even within a single map. Levels have also been designed in a much less linear fashion, so creativity and replay value have both been enhanced.

If you want, you can even play Sniper Elite 5 like you would a real time tactics game like Desperados III, carefully taking out enemies one by one by luring them away and killing them without any sound. Or, if you prefer, you can alert a bunch of enemies by taking out one of them, and then make bombs go off as they all panic and start to get into position to try and find you. Both the levels and your arsenal of weapons are well suited to a variety of gameplay styles, which is a credit to the developers.

Doing well in missions means you gain XP, which you can spend on a skill tree that improves your abilities in combat, your ability to carry stuff and your base stats. While this creates a natural sense of progression throughout the campaign (although your progress also carried over to the multiplayer portion), the way your sniper rifle works doesn’t change too much and is going to be instantly familiar to veterans of the franchise. 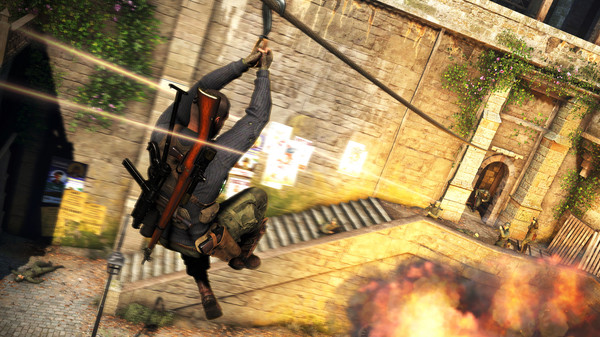 The same can no doubt be said about Sniper Elite’s kill cam, a staple of the series at this point. When you line up a shot and pull the trigger, this instantly tells you that you did a good job when the camera switches to a view of the bullet leaving the chamber, traveling across the scenery and into the enemy body – where you see a gruesome image of it shattering bone, piercing through flesh and taking out your target. New is that other weapons can now also trigger this effect, and when using a machine gun that means seeing multiple bullets hit their target in quick succession, for a devastating effect. You can adjust how often you want to see this effect, or you can even turn it off completely, but it’s gratifying and didn’t get repetitive during the course of the campaign.

That campaign is incredibly enjoyable because of its strong campaign, though its story and narrative delivery isn’t great. The “American hero” plot has been done too often in B-movies at this point, and the voiceover work is similarly lacking in nuance at times with some cheesy delivery, so this is one you play for the gunplay and stealth rather than the story. Unless, of course, you like B-movie pulp, like us.

Replayability doesn’t just come from the different ways in which levels can be tackled, but also from collectibles (and trophies) than you can chase after on subsequent playthroughs. Some of these rewards are tied to specific playstyles as well (like stealth), so it’s fun to see you get encouraged to try and play in different ways. This also carries over to the game’s multiplayer aspect, though the lobbies weren’t populated enough during the review phase to give this a good look.

Sniper Elite 5 doesn’t radically change anything that Sniper Elite 4 did earlier, and someone walking by will instantly recognize it as a Sniper Elite game. It does improve on the previous game in a number of impactful ways though, with better visuals, excellent map designs that allow for multiple gameplay styles and a higher emphasis on stealth that is a welcome alternative to the more action-oriented style of the other games in the franchise.