Souldiers, which was developed by Retro Forge and is being published by Dear Villagers, is out now for PlayStation, Switch, Xbox and PC. We checked it out on a PlayStation 4.

When we first saw an announcement for Souldiers and read that it was an action RPG, we thought “here we go again”. It had “soul” right there in the title, so we were ready for it to be yet another take on the soulsborne formula. Surprisingly, it’s actually much closer to another rather overcrowded genre – the metroidvania, though it manages to stand out from the crowd thanks to well designed gameplay.

Story-wise, you find yourself suddenly fighting in a land called Terragaya, a strange land that transcends the traditional boundaries of the afterlife. You and your fellow soldiers haven’t actually died though, and you’d like to keep it that way, so you have to travel through this world in order to move on. You’ll slowly uncover what happened and work your way back, but there are plenty of enemies and challenges standing in your way.

Because you’ve been transported with a group, you can choose to be an archer, scout or caster – letting you emphasize either ranged, melee or magic-based combat. Standard attacks include quick and powerful strikes, but you can also block or dodge to avoid taking damage. Classes also have their own specific skills (only the scout can parry, for example), but what’s universal is that you can equip orbs in order to gain elemental buffs against opponents.

You can also pick up consumables and collectibles, but while it sounds like a lot on paper a lot of the RPG mechanics are very streamlined and you don’t have to spend a lot of time figuring out how to level up or equip your character – the emphasis here is on exploring and action, much more so than in a soulslike game. If there’s a similarity, it’s that Souldiers can be challenging, with a meaty campaign that will take most players over twenty hour to complete – and replay value if you want to try again with a different class. 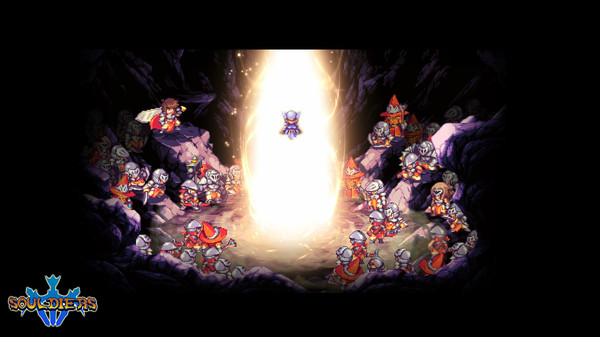 Visually, the developers of Souldiers claim to have gotten their inspiration from the 16-bit era of pixel art, but that doesn’t do the game enough justice. With wonderful backdrops and detailed sprites, the game feels like how a 16-bit game could have looked if developers hadn’t gone for 3D and bigger sprites in the 32-bit era. With some excellent animations and lively music, this is a lovely world to get lost in.

It’s also a game world that goes hard on the metroidvania elements mentioned earlier. Exploring is very worthwhile, and can be done in a non-linear way as upgrading doesn’t just make you stronger but also gives you new traversal option – which in turn gives you a chance to find more upgrades. In the second half of the game this process can start to feel a tad repetitive as the rewards grow fewer in number, but Souldiers does a great job at drawing you in and giving you new tricks to play around with.

It may drag a little near the end, but Souldiers is an excellent metroidvania with some beautiful audiovisual design work – one that fans will certainly enjoy diving into for a lengthy campaign.