A true multi-platform VR release, Floor Plan has just been released for Playstation 4 owners with a PSVR headset. How does this escape room-type puzzle game by developer Turbo Button compare to others in the genre?

The control scheme options for Floor Plan betray its Gear VR compatibility – there’s an option to play with the dualshock gamepad by just looking at and pressing X. This is great for those who won’t have access to a pair of Move controllers, but most PSVR owners probably do and they’re the best option for Floor Plan as well – transforming Sony’s motion controllers into a pair of in-game hands for you to use. It’s more immersive and fun, but it’s nice to know that there’s an option to fall back on gamepad controls should you need or want to.

Floor Plan is a little like the excellent I Expect You To Die in that it’s an escape room game where you manipulate scenes in order to move forward in the “story”. The unique aspect about Floor Plan is that an elevator plays a crucial role here and all the “rooms” are connected – you travel between them using said elevator and your action in one room will affect objects elsewhere. 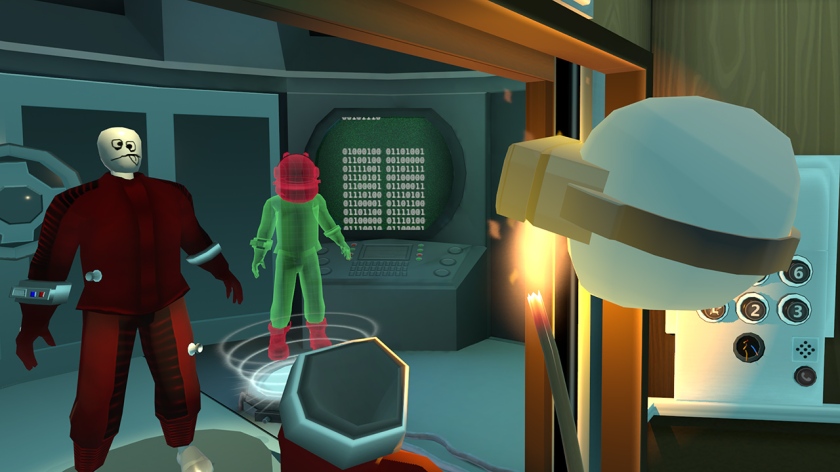 Because of this, you can pick up objects and take them to a different location, using your four item inventory. Combining items can feel a tad random, bringing back memories of that classic PC adventure game era where you were carrying around an item across multiple scenes, eventually using it in a way you didn’t expect. Because of this randomness, there can be an incentive to use the in-game help system for clues, but I’d definitely advise against this on account of the game’s already short length. Most puzzles can be overcome using a bit of trial and error and I got through the entire game in less than an hour and a half this way – with a leisurely pace that allow me to take everything in.

There’s a sense of progression stemming from the fact that more puzzles (or floors) open up as you complete challenges. This increases the complexity as you now have more options to choose from, but in most cases you don’t have to return to a room once it’s been “completed”. The occasional random moment aside, this makes for a well-designed (albeit short) adventure from a gameplay perspective. There’s also a fair bit of personality that comes with it, as some rooms feature characters and interaction – though not quite up to the level of writing and wit seen in I Expect You To Die.

Floor Plan is visually appealing despite its multiplatform (Gear VR) compatibility – crisp, cartoon-like visuals make up for a relative lack of detail with plenty of color. There are a few visual upgrades in the PSVR (and Rift/Vive, I’d assume) versions over the mobile edition as well, showing that Turbo Button didn’t just want to do a lazy port. Some technical issues remain though, like objects that didn’t respawn when I dropped them on accident.

Of course the escape room/puzzle genre is a popular one in the VR domain, with titles like I Expect You To Die and Statik providing some of the most unique experiences currently available. Floor Plan isn’t quite as good or unique as those two, but it doesn’t have to be – it’s a budget game, which makes it easy to forgive its shortcomings in terms of game length and a small technical issue. If you’re interested in an escape room game but don’t want to pay too much for the experience, Floor Plan’s got you covered with solid gameplay that will last you about an hour – much like a real escape room, but at a fraction of the cost.