Sony’s Blood & Truth, developed by Sony’s own SIE London Studio, is quite possibly the technically most ambitious title to hit Playstation VR this year. Placing you inside an adrenaline-filled action movie, we couldn’t wait to check it out – here’s our review.

Sony’s Playstation VR Worlds, a launch title for the Playstation VR headset, isn’t often used as a frame of reference – but it’s a pretty good one in this particular case. The reason it’s often overlooked is that none of the five titles in the collection are fully realized games – but rather demos or experiences that illustrate what you can do with VR. But, technically, they’re still some of the best examples you can get – and one stands out in particular: The London Heist.

Developed by the same studio that developed Blood & Truth, it’s a great showcase – and their new game is essentially that vision realized into a full game. It’s every bit as gorgeous to look at and, for the majority of the story, keeps the momentum up very well. As far as on-rails shooters go, it’s a vastly superior experience to the likes of Rush of Blood – another early Playstation VR title with high production values. 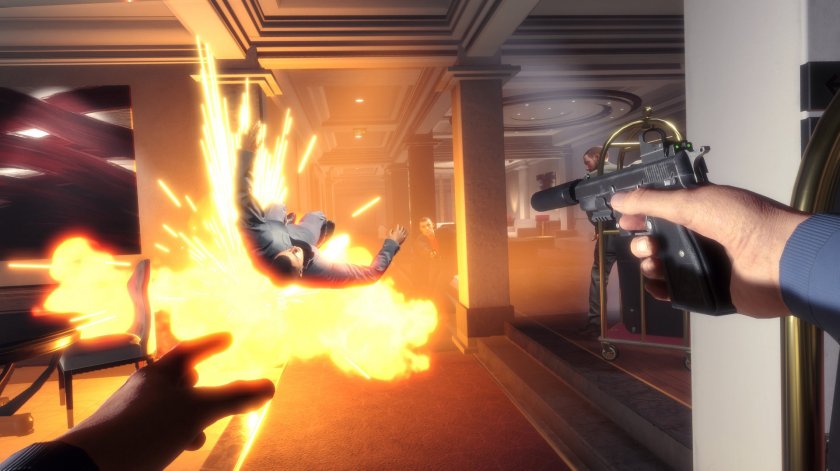 With plenty of explosive action and great movie-like camera direction, as well as a distinctly British flavor in terms of voice acting and tone, it’s easy to think back to movies like Snatch when playing Blood & Truth – with hints of Kingsman – The Golden Circle and James Bond as well. I found the latter to be applicable especially to the game’s opening sequences, where you traverse rooftops and end up trying to escape inside a vehicle as you’re being chased by enemies that you need to fire on during the high speed getaway.

Much of the gameplay in Blood & Truth plays out this way – high octane action that grabs you by the throat and doesn’t let you go until the end of the level. In between levels is where most of the storytelling takes place, and it’s also where the momentum can dip a little in comparison to the gameplay sections as the cutscenes can be rather lengthy by comparison.

The story is a tale revolving around a soldier returning home and getting tangled up with a London crime organization – over the course of a total of almost 20 missions you’ll try to tear their empire apart and take down their boss. You can do so with a standard Dualshock gamepad, but (as with Rush of Blood and most every VR shooter title) this is an experience you should really have with a pair of Move controllers in hand.

The controls work very well, and I hardly encountered any tracking issues. Despite Blood & Truth being an on-rails experience there’s also a fair bit of diversity to the controls, as you start off with simple pistols but are gradually introduced to rifles, shotsguns and even sniper weapons – as well grenades for you to toss. And even though the experience is scripted, you’re less “on rails” than you are in games like Rush of Blood. You can often determine the pace with which you move forward to the next location, you can shift your position when in cover, and there are sections where you have to interact with tools and the environment as well – all of which makes for a way more immersive experience than the average “shooting only” experience.

In fact, it’s this diversity, along with the excellent production values, that makes Blood & Truth the amazing experience that it is. The action portions are great, but there are also plenty more light-hearted moments in the game – with most of the drama reserved for cutscenes. This is a must-have VR experience for Playstation VR owners, even if not everyone’s going to be on board with the British flair with which it’s delivered and the campaign’s running time is on the short side. But hey, this is the closest to a full-length interactive action movie I’ve come across so far.