Due out on the 18th of October, Ice Age: Scrat’s Nutty Adventure brings the Ice Age franchise back to videogaming with a platforming adventure starring Scrat, the acorn-obsessed squirrel that has become a bit of a breakaway star on his own. Here’s our preview.

Published by Outright Games, known for their previously released kid-friendly titles that include Paw Patrol: On a Roll and Crayola Scoot, Scrat’s Nutty Adventure provides another kid-friendly approach to an established genre – much like Crayola Scoot did for the skateboarding genre.

A 3D platformer, this new Ice Age game gives you control of Scrat as he searches multiple levels for small crystals and solves puzzle challenges, all to reach his ultimate goal of (what else) recovering his beloved acorn from an initially locked temple.

We went hands on with the game during Gamescom for a lengthy demo session, which was the first time the game was shown to press in a hands-on capacity.

Instantly playable to anyone who has some experience with 3D platformers, Ice Age: Scrat’s Nutty Adventure is a clear fit with Outright’s kid-friendly approach to videogaming. The controls are easy enough (reminding me of the Skylanders franchise a little), though the 3D aspect makes the experience a little more involved than Paw Patrol – which is for a slightly younger audience.

Where Ice Age is different from Paw Patrol is also in the fact that it’s not just kid-friendly, but also family-friendly. It’s perfectly playable for kids by themselves, but older gamers will find fun in the opportunity to unlock secrets, traverse less-than-obvious paths to reach rewards and perhaps get that elusive unlockable or trophy. 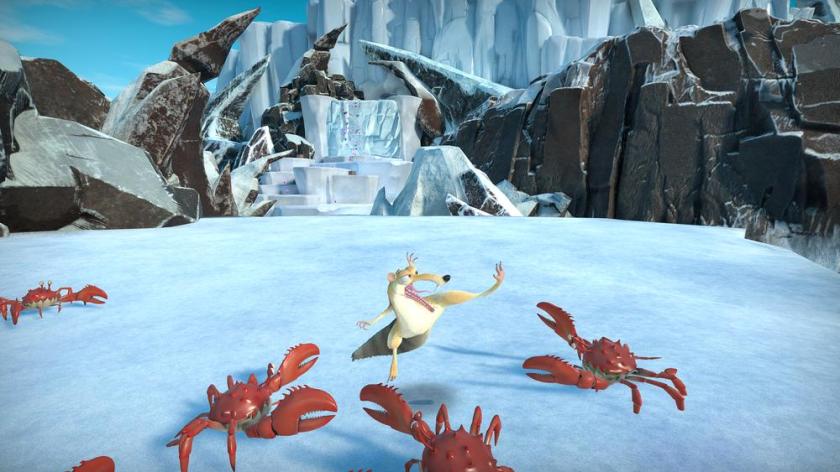 The cartoon-like presentation fits well with the source material, and when Scrat ventures off outside of environments that are mostly snow and ice the game becomes colorful as well. The game world is full of little details that make it come alive as well, ranging from remote vistas to other animals moving around in the distance – making the game fun to watch even when you’re not personally playing.

Our hands on session didn’t showcase a lot of that signature humor that comes with Scrat’s antics, but perhaps that’s something reserved for the full game when it releases next month. Either way, Ice Age: Scrat’s Nutty Adventure is shaping up to be an excellent platformer for the younger crowd while keeping their older family members on board for the experience.