After the runaway success that was the original 2008 release of Pandemic, it didn’t take long for Z-Man and Asmodee to come out with sequels, expansions and spin-offs. We’ve been getting about one or two per year for a while now, and recently saw the release of Pandemic: Rapid Response. Should you pick this one up for the holidays? We played it to find out.

Thematically, Pandemic: Rapid Response is closely tied to the original game – and most of the other Pandemic releases, we’d reckon. The world is in need of your help, as a pandemic has created an urgent need for food, supplies and medicine. Get the right things to the locations at the right time, and get people to live to see another day. Rapid Response plays out very differently from the original game though, but more on that later.

When opening the box, a visually familiar pattern appears with a game board (that doubles as a world map) and cards, all look very much like what you’d expect from a Pandemic title. In Rapid Response it’s all about the dice though, and plenty of great design work went into those. They’re bright and colorful, have clear pictograms on them and generally look great. There’s a rule book included as well, but it doesn’t take long to get the basics for the game – this is a game you can pick up and play quickly, and can be played with newcomers as well. 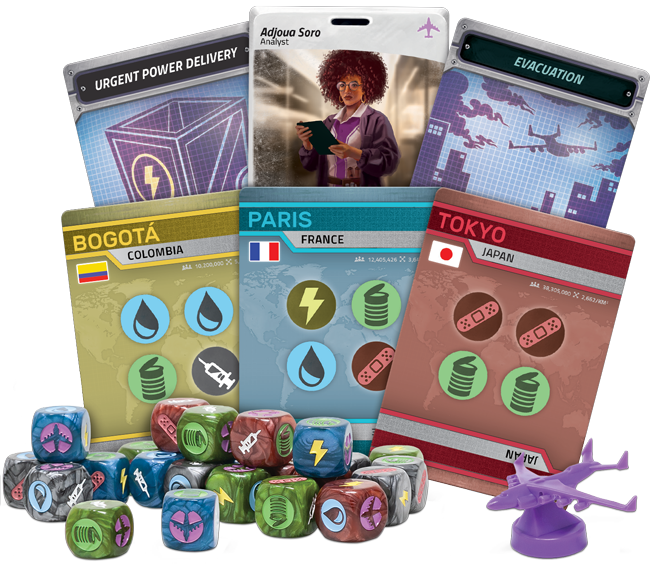 Speed is the name of the game here, which is the biggest difference with the core Pandemic games. Instead of spending your time strategizing, you have to act quickly and react to the roll of dice – moving around the board to drop off the supplies you’ve crafted while playing. Everything’s timed using a sand timer that is included with the game, so the pressure’s always on. As a side effect, this also means that the average length for a game of Rapid Response is fairly predictable, with a playthrough lasting about 20 minutes every time.

Pandemic: Rapid Response is played in short rounds, ending when the timer runs out of sand. During these rounds, you take turns in rolling the dice, acting based on the result. You can (partially) re-roll, but sometimes – for the sake of time – you’ll want to stick with what you get during your first roll and move on. How and when you roll is also determined in part by your assigned role in the Crisis Response Unit, which you get at the start of the game.

Once the time runs out, new elements are added to the game depending on your chosen difficulty level. This can mean a new city that’s in trouble, or a sudden crisis that will need your attention during the next round. It’s great to see a board game like this have the option to scale the difficulty level to suit the needs of the players, which will also allow you to play with younger kids who would otherwise be overwhelmed by too much complexity (Rapid Response, like the original Pandemic, has an age rating of 8 and up).

The game can be played with 2 to 4 players, but the game rules don’t change much. With more players you have access to more roles and more time in between turns, potentially making it easier to plot your moves before it’s your turn. On the other hand, having just two players at a time increases the tension and overall ‘frantic-ness’, which is part of the game as well.

No matter how you play (in terms of the number of players or the difficulty level), Pandemic: Rapid Response is a fun title in the Pandemic universe that is more accessible to casual players than Pandemic was. It lacks some of the strategic elements that made the original great, but the subtle narrative influences and scalability of the experience certainly make it a worthwhile addition to the franchise.