IFI’s latest is Azur Lane: Crosswave, out now for Playstation 4 and PC. It’s the kind of odd that only a few publishers regularly deliver, and IFI’s one of them. How did it turn out though?

If you follow mobile gaming, you might be familiar with the name Azur Lane, since the original game was launched for iOS and Android back in 2017. But while that was a traditional 2D shooter, Azur Lane: Crosswave is a 3D reimagining of that game and uses Unreal-powered graphics to create a cel-shaded cartoon-like look.

The characters that star in the game look like your typical anime girls at first glance, but they’re actually based on giant (real world) battleships that have been somehow merged with them – yes, I said it was a certain kind of odd. There are over two dozen of these characters, so if there’s a bit of a history buff in you then that should be a nice extra touch – as most of the ships are iconic World War 2 examples.

The game’s main mode is story mode, in which you play through seven chapters. There’s a bit of “fleet management” in between as well, where you equip your characters with items that will boost their in-game stats. That’s not the real meat of the story mode though, because even though you’d expect tons of action you’re actually spending the majority of your time reading and listening to the narrative whereas individual levels can be under a minute long. Going into this with the expectation of playing a shooter, these elements feel poorly balanced in how much time they take up. Luckily, the story is an interesting one and the writing is fairly decent, but I personally didn’t come here for the narrative.

Once in-game, you can maneuver your character using standard FPS controls for your thumbsticks as you drift across the water and hammer your attack and special ability buttons (what does what in your current loadout is conveniently displayed on screen). Combat’s not exactly deep or especially challenging, which kind of makes the time you spend equipping your characters prior to a battle feel like a waste of time. That feeling also carries over to the many weapons and items you can collect, since they also don’t have much of an impact on how the game plays out. 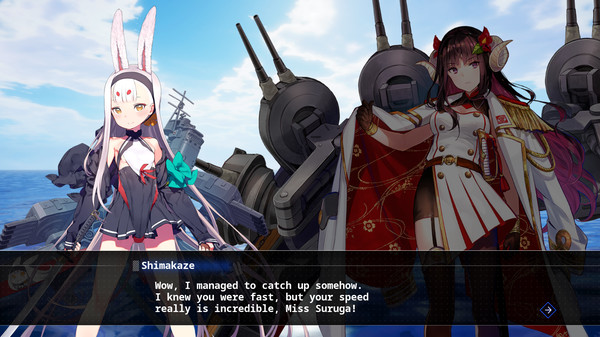 After playing through the story mode, you can also engage with the “Extreme Battle” mode, which offers scenarios that aren’t as story-heavy. You’ll find over a hundred of them, so Azur Lane: Crosswave definitely isn’t light on content – and that’s not counting the Episode mode, which fleshes out the characters and the game’s universe a little more. There’s a photo mode as well, but that is mostly for those who enjoy anime girls and posing them.

Although the story is well done, I generally prefer other genres for my story fix. As an action game, Azur Lane: Crosswave disappoints, with a lack of challenge and diversity in the gameplay that keeps the narrative and the interesting characters from really shining.