Containing not just the original Command & Conquer but also its sequel Red Alert along with all of the expansions for the games, the Command & Conquer Remastered Collection offers great value to longtime fans of the series. Here’s our review.

If you were around for the rise of real time strategy as a genre, then few names are more iconic than Command & Conquer and Warcraft. Sure, later games like Company of Heroes and Homeworld did new and exciting things. Sure, they’re predated by earlier games like Dune II and Carrier Command, but it’s these two that really kickstarted the RTS craze.

Despite a recent-ish release for mobile, the Command & Conquer franchise has laid dormant for about a decade now, after a first fifteen years or so that were incredibly prolific. This new remaster brings together the two most iconic games in the franchise, from the pioneering Command & Conquer (1995) to the east vs west take that was Command & Conquer: Red Alert (originally released in 1996). There have been compilations before, but this is the first time you can get these games with upgraded visuals as well as some never before seen content. 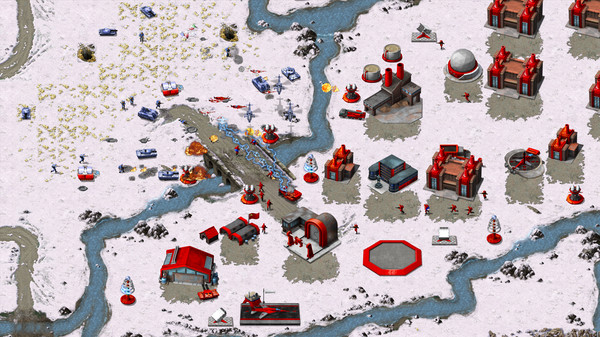 Both games now have new 4K-enabled visuals for you to play with, creatively introduced as the game starts up with 1990s visuals before prompting you to activate the upgrade with a touch of the space bar. And yes, this is still a top down 2D real time strategy game and you shouldn’t expect visuals like those we’ve seen in games such as Dawn of War 3, but the difference is like night and day when you compare them – making this the Command & Conquer you remember (which looked great for its time) rather than the Command & Conquer it actually was (a rather pixelated affair).

What also received a boost are the rather memorable full motion video sequences that were shown in between missions. Hugely compressed at the time to fit CD-ROM media, the original videos didn’t age very well, and although we’re not getting 1080p BluRay quality from the videos the new upscaled versions are much easier on the eye than the original ones were. You’ll also notice that the soundtrack has been re-recorded, and even expanded with new works.

Beneath the much-improved surface, the actual gameplay is still pretty much identical to what we got back in the mid-to-late nineties (including the post-release content here). That means that the remasters have that same easily accessible control scheme that the originals had, and the user interface is intuitive and not as convoluted and complex as the ones in later games in the genre – without sacrificing the sense that strategic and tactical choices actually matter.

On the downside, there are some issues with the AI that were there 25 years ago as well and weren’t fixed in the new version. This means that your units can get stuck in the scenery every now and then, especially if they have to navigate around a number of corners rather than in a straight line. You can also exploit certain strategies if you’re a veteran of these games, but that’s to be expected in a game that’s 25 years old. At the end of the day, despite the “old” issues, the gameplay’s held up remarkably well.

In addition to the games themselves, the new collection also features a number of extras – including a bit of “making of” stuff that should appeal to fans and a map editor that gives you the chance to create your own maps. I remember having a CD-ROM with hundreds of maps back in the day, so I’ll have to see if those are compatible! If you’re playing through Steam then there’s Workshop support included, so hopefully we’ll see a thriving community just like we did back in the day.

Most definitely best geared towards longtime fans of the series, the Command & Conquer Remastered Collection is about as good an experience you can get without going back and doing a full remake instead. Let’s hope it’s a starting point for more Command & Conquer in the next few years, with remasters, remakes or even brand new entries in the franchise.