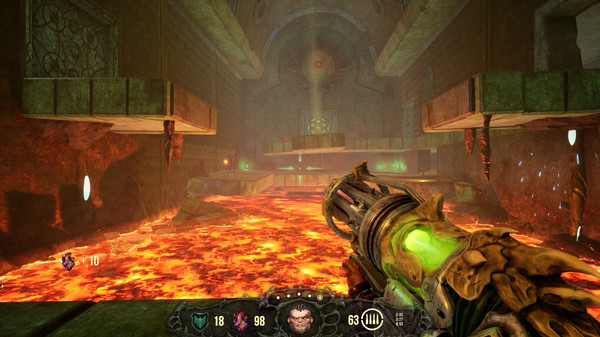 Loud, fast and violent, Hellbound from Saibot Studios is a brand new first person shooter that echoes an era in gaming where FPS games were very much a “shoot everything that moves” affair. Out now on Steam, we went to hell and back with Hellbound.

Hellbound certainly wears its inspirations on its sleeve. With its hell-themed setting and loads and loads of demons to shoot in the face, this one has Doom written all over it. Gameplay-wise it’s mostly about the first two games in that franchise though, as Hellbound’s developers lovingly refer to their game as a “90s FPS”. It doesn’t go for the narrative horror approach of Doom 3, nor the mechanics of the recent Doom Eternal. No upgrades to carefully consider here, just pick up the weapons you find and shoot.

And while a love letter to that era certainly isn’t new, with games like DUSK and Ion Fury having already been successful at this approach. But where they feature the kind of graphics that we associate with the original Doom, Heretic and Duke Nukem 3D, Hellbound features a more modern look that takes a few cues from the Doom reboot instead. Obviously it doesn’t look quite as good as id Software’s 2016 blockbuster, but I personally really enjoying having a retro FPS that does not feature dated visuals. I fully realize it’s often intentional and it doesn’t affect the gameplay, but I also think it’s been too long since we had something like Painkiller.

You could say that Hellbound also takes inspiration from Duke Nukem, with a wise-cracking protagonist to offer some reprieve in between all of the explosive action and loud (metal) soundtrack. You’ll also find old staples like the need to discover keycards to open doors, as well as the need to press a switch here and there. The gameplay itself modernizes itself in the sense that its level design allows for a lot more verticality thanks to the more modern visuals, which is something that I appreciated.

One of Hellbound’s biggest problems at this point in time is that a lot of its gameplay elements aren’t as refined as what we’ve seen before, even within this retro FPS niche. I don’t necessarily need intricate level designs to have fun, but I do like my experience to be polished to the point where I don’t run into technical glitches like custom controls that don’t get saved or guns that refuse to fire even when I have plenty of ammo.

I’m sure these will be fixed sooner rather than later, but the game’s other issue lies with the fact that it’s terribly low on content, with a campaign that (on the easiest setting) look me less than three hours to complete, a very small weapons roster and nothing too exciting or diverse in terms of variety of enemies either. I’m all for simplifying my shooter experience and I’m actually deterred by shooters where the controls are their own learning curve, but when things feel stripped of content it’s another story.

Still, as a short experience Hellbound is a fun throwback shooter and it has a price tag to match its relative lack of content. You’ll wish there was more by the end of it, but will have fun getting to the end.