This summer sees the release of what could be one of the top sellers this coming holiday season. A unique collaboration between LEGO and Nintendo, we take a look at the new LEGO Super Mario range of playsets.

Combining two beloved franchises, LEGO Super Mario takes a selection of Nintendo’s most iconic series of videogames and gives them the LEGO treatment, with Mario himself front and center in an interactive digitally enhanced blend of building and playing. With the ability to build, modify and expand your own challenges and levels, LEGO Super Mario is geared towards LEGO and Mario fans aged 6 and up.

If you’ve been following videogame trends in recent years, it feels like the right time for a range like this. Because of games like Minecraft and Dragon Quest Builders, crafting your own interactive worlds has been popular with many (young) gamers, and Nintendo put their own spin on the formula with the Super Mario Maker games – in a way, LEGO Super Mario feels like it brings games like this to life and puts them in kids’ hands rather than displaying them on a screen. 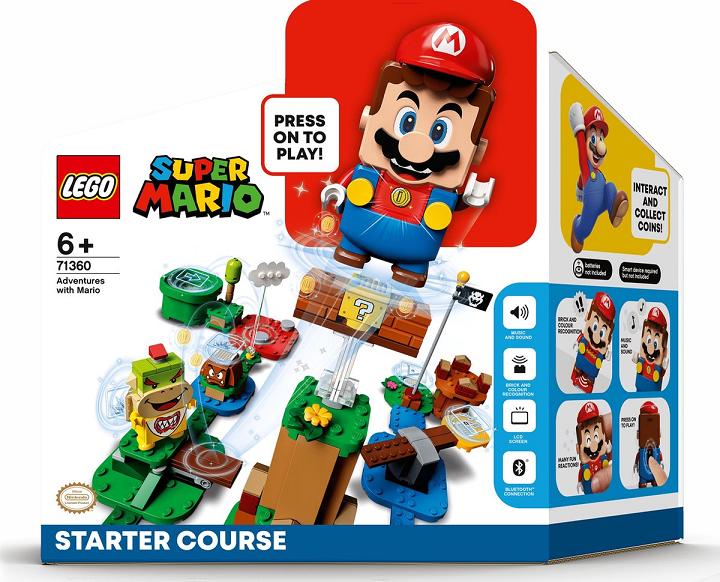 At launch (August 1st), there are already over a dozen LEGO Super Mario kits available to play with. At the very core of them is the Starter Course, also dubbed “Adventures with Mario”. It’s also the only playset that includes Mario, so it’s a fairly essential purchase if you want to unleash the full potential of the LEGO Super Mario range. Besides Mario, who we’ll talk about more later, it also contains a little Goomba as well as a Bowser Jr. character – both of which you’ll have to assemble yourself.

In addition, the Starter Course also has a number of familiar elements – many of which harken back to the very first NES adventure of Mario with a green sewer pipe to start from, green hills to climb, a question mark box to hit and a flag at the end. With a spinning platform, a floating cloud, several decorative elements and a small fortress that you can flip over with a spring board, this is a starter set that is more complete that we had initially assumed, and kids can already mix things up quite well even without any of the expansion sets.

There are plenty of expansion sets to choose from though, and they range from fairly straightforward and easy to build sets that can be used to expand your Starter Course with a little detour to a full blown boss fight that stars Bowser. All of the expansion sets are themed and include familiar characters, including Yoshi and Toad – though there is no sign of Luigi just yet. Many of the characters and special features in each set are exclusive to that particular set, so when you’re collecting it’s nice that you’re not running into a lot of duplicates. Most are priced at about a third to half the price of the Starter Course, though the big Bowser set is actually the most expensive set in the range so far and costs more than the base kit does.

The expansion set we got to play with is “Whomp’s Lava Trouble”, which includes Whomp (of Super Mario 64 fame), a Lava Bubble, and is unsurprisingly themed around lava. There’s also a P switch in the set, to allow Mario to gather additional coins. Most importantly though, our young playtesters got to play their very own version of “Mario’s Floor is Lava” with this playset, much to their delight. In addition to the expansion sets, you can also pick up Power-Up Packs, which are essentially costume changes for Mario that coincide with the in-game powerups from the videogames. For us, this meant we got to play with Propeller Mario, who can pick up coins while flying in the air (for which you can use the cloud in the Starter Course).

In describing the playsets, we haven’t really touched on the Mario figure yet, and although plenty of time can be spent building level components out of LEGO bricks things don’t really come together unless Mario is added to the mix. The figure is battery-operated and technically very impressive, with eyes and a mouth that light up when you turn him on. Mario also speaks when turned on or off, changes his expression based on what’s happening and has a small color display on his chest that reflects what Mario is interacting with in the world.

When you’ve set up a level configuration that you’re happy with, you make Mario touch the sewer pipe to start, which triggers a timer. You can then navigate your course, tackling the challenges you’ve laid for yourself and others – noting that blue LEGO pieces signify water and red ones mean fire, so Mario needs to be careful. The timer gives you sixty seconds to complete the level, so you have to be pretty quick.

Although technically you can “cheat” by hitting the flag tile right after the start tile (Mario has a light and sensors that tell him where he is), navigating the level actually yields points – like when you knock over Bowser Jr. and jump on his back a few times, or when you spin around on the moving platform, or hit the question mark block.

Not only does the display on Mario’s chest change depending on what he’s doing and where he is, the little figure also outputs different sounds and music – all of it context-sensitive. It’s technically wonderful to look at, and wonderfully immersive for kids who are seamlessly combining Mario’s videogame world with the building aspects of LEGO. And although technically this is a range for kids 6 and over, we saw firsthand that using Mario to jump on a Goomba repeatedly is also tons of fun for much young kids who don’t care about the level setup or game element.

Adding to the innovative nature of the LEGO Super Mario range is the companion app that is free to download for Android and iOS devices. It’s a mandatory download because it also contains building instructions, which aren’t supplied on paper. Although there are downsides to this (a huge 700mb download/install is one of them), the instructions are excellent, with the ability to zoom in on the pieces you need for a step, highlighted pieces and the ability to rotate the on-screen model to see what goes where.

The app isn’t just to help you get started though – it also lets you share your creations with others and explore different configurations for your set. Mario also communicates with the app through bluetooth technology, which lets the app keep track of how Mario does during any particular run through a level of your own creation. Gather a lot of points defeating Bowser Jr. or lose a bit of health falling in the fire? The app will let you know in the summary at the end of each run.

There’s no need to give up a phone or tablet to children wanting to play though – Mario and the various playsets work just fine without it. Mario will still interact with the various colored bricks, interactive bricks and characters he encounters, and the course can be changed as many times as you like in between runs.

The LEGO Super Mario range is much more than a collection of Mario-themed LEGO sets thanks to an innovative use of technology that brings the “Mario game” element to these sets by introducing a level of interaction between the characters and their LEGO environment that we’ve rarely seen before.

Collecting the entire range is a pricey affair though, and most of the expansion sets aren’t as diverse as the Starter Course, which offers the best value for money. As mentioned before, it gives you plenty of options to configure courses for Mario, and expanding the set is easy. Once you know which theme or character you’d like to add, your ways of setting up a level can grow quickly – and we wouldn’t be surprised if more sets were to follow in the coming months, leading up to the holiday season.