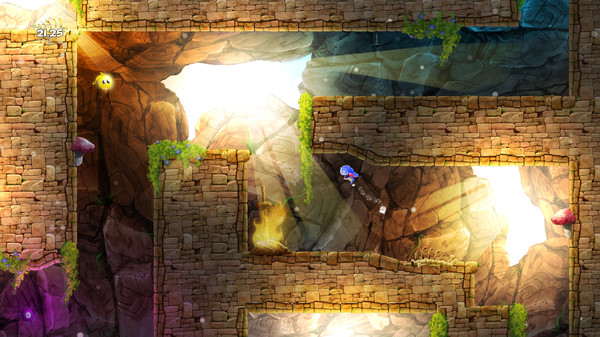 Developed by Caracal Games and published through Ignition Publishing, OkunoKA Madness is a Super Meat Boy-inspired speedrunner that’s out now for the Nintendo Switch, PlayStation 4, Xbox One and PC. Here’s our take on what we saw on the PS4.

If you’re played and enjoyed Super Meat Boy, then you’ll feel right at home with OkunoKA Madness from the moment you jump in. The core concept, as well as the controls, are both very similar to Team Meat’s influential platformer – even though a few twists emerge once you pass enough levels. Initially though, it’s about reaching the end of a level (where main character KA actually eats the fluffy goal target), and you do so by jumping, hopping and sprinting whenever the level requires it.

As with Super Meat Boy, your performance is graded, and scores range from A to F depending on how long it takes you to reach the end. Beat the required score, and you might even be awarded that coveted S mark for the level. OkunoKA Madness puts a big emphasis on speed running though, with the inclusion of global leaderboards where you can compare your times to those of others. I managed to grab top spots on some of the earlier levels after a number of retries, but as the levels grew more complex I found myself sliding down the rankings.

KA himself looks a bit like Disney’s Stitch, with his blue alien-like features and his eagerness to devour each level’s target, but he’s not the only character in the game. Playing unlocks additional characters for your roster, and many bring unique skills that will help you tackle levels in new and (hopefully) quicker ways. I love this feature, because it encouraged me to revisit previously played levels and see what I missed. That also applies to the game’s many collectibles and portals that whisk you away to levels that take place in another vortex-like dimension – levels that have their own collectibles which in turn unlock more new characters.

Visually, OkunoKA Madness offers a welcome break from all of the retro/pixel-style speedrunners out there, instead opting for modern and highly detailed visuals that evoke memories of games like Rayman Legends and Rayman Origins. The animations aren’t as elaborate here, but they don’t need to be because OkunoKA Madness uses a zoomed out perspective to help you speed run through a level with some sense of where you’re going. For a game in this genre, this is a gorgeous example. 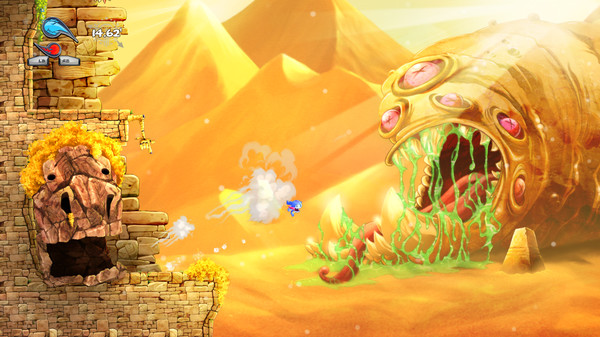 As you’d expect, levels become more challenging as you progress through the story (which only really features at the start of each world – much like it does in Super Meat Boy), but special abilities are also gradually introduced. An early example of this is the ability to make platforms (made of ice) vanish or appear with the press of a button – doing so opening up (of closing) your way to the exit. Fire and electricity are also tied to special powers, and they’re used in creative ways that keep the campaign mode from feeling repetitive.

Beat the campaign, however, and you can try your hand at the “madness” levels – which are insanely difficult levels that are sure to frustrate players as they struggle to even beat the first one. More welcoming, then, is the time attack mode. You might think that you’ve already done this during your initial playthrough, but time attack doesn’t open up after you complete an entire world of levels and requires you to play through all of its levels in succession in order to set a time. For those who enjoy leaderboards, this is a great way to see how consistent you are, because failure in a single level can cost you a top spot.

With very smooth and responsive controls, OkunoKA Madness might resemble Super Meat Boy a whole lot, but it’s one of the best copycats we’ve seen in the past ten years, adding subtle innovations along the way.