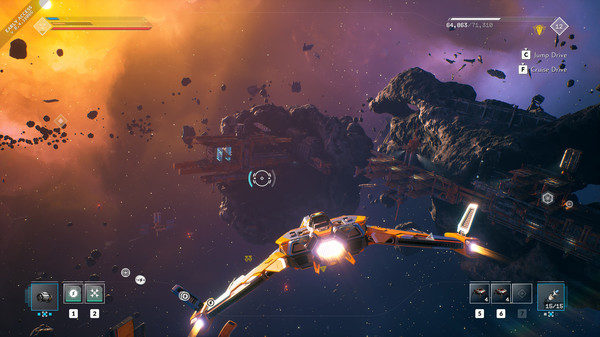 From an epic sci-fi looter-shooter to a new 3D indie action adventure and from new content for VR favorite Synth Riders to a retro-flavored run and gun platformer, we’re seeing a lot of new releases again. Join us as we check out Everspace 2, Teratopia, Golden Force and the Synthwave Essentials 2 DLC pack.

We caught our first glimpse of Everspace 2 during Gamescom in 2019, which was the initial announcement for the game. Little did we know, because Gamescom is relatively late in the trade show season, that was also the last time that many got to see and play the game (although kickstarter backers received an early demo build). Now, the game is out on Early Access, and it’s not just shaping up to be a great sci-fi shooter that’s absolutely gorgeous to look at, it’s also a case of Early Access done right.

While the first Everspace was smaller in scale and played like a rogue-lite space shooter, the sequel feels grander in scale with its more narrative-driven campaign and promising storyline. Even in Early Access, this is a game that fans of Freelancer and Privateer will delight in while they endure delay upon delay for Star Citizen. Yes, we also can’t wait for that one, but Everspace 2 has certainly been filling that void since its Early Access version released.

We previewed Everspace 2 earlier, and while we knew that the previous version we played was only meant as a demo we were still amazed at how feature- and content-rich the Early Access version is, especially when you consider that Rockfish is planning on keeping it in EA for well over a year. The story campaign, for example, can already be explored at great length. It’s not fully complete, but it’s a great way of exploring what the game has to offer as the story gradually branches out to give you more options. 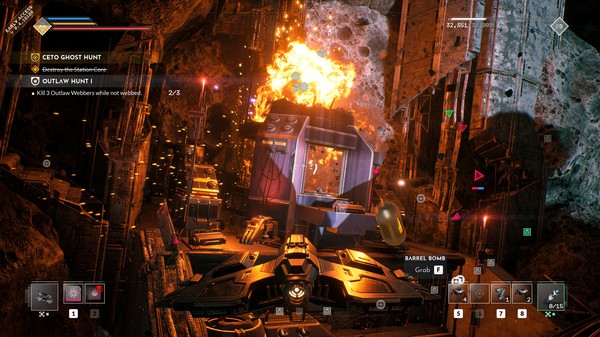 Initially, you’re a combat pilot who escapes imprisonment after being trapped by space pirates, and because you don’t escape alone you quickly form a crew of sorts, which helps drive the narrative. You can stick to story missions, but there are plenty of additional objectives to take on, all of which give you loot of some sort if you’re successful. This then introduces trading as a mechanic as well, and exploring the solar system (and beyond) with all its secrets and species makes sure that the gameplay keeps branching out a well.

So far, we’re already over 10 hours into a playthrough, and while it’s worth noting that the story content is still going at that point it’s perhaps even more noteworthy that this build has been free of glitches, game-breaking bugs and whatnot – something really impressive for a game that’s this far out from its full release. And that’s not even taking into account that Everspace 2 is absolutely gorgeous to look at. The cutscenes aren’t motion capture or live action or anything like that (Rockfish is a relatively small studio), but there’s voice acting with animated stills and the in-game visuals are stunning. One to look out for, but also one you won’t regret jumping into early.

Teratopia launches on PC and consoles

Eastasiasoft has certainly had a busy winter so far. With six games coming out for a variety of systems over the course of just over a month, the indie publisher has been very prolific as of late. After reviewing The Pillar: Puzzle Escape just last week, we also checked out Teratopia, which comes to all major consoles as well as PCs this week.

As first sight, Teratopia feels like a cute and colorful 3D platformer like Yooka-Laylee or Lucky’s Tale, but it’s actually a lot more action-oriented than most games in the genre, with a big role for combat. In that sense, it’s perhaps more comparable to the early Skylanders games with its colorful and cartoon-like visuals and emphasis on melee and mid-range combat.

You get a choice of characters (each with their own set of moves) and you can thus adopt a playstyle that favors your personal preferences, for instance slapping your enemies around with Tucho or firing at them from further away with Benito. Close to a dozen boss fights each require their own strategy as well, which means there’s replay value in trying to tackle them with different characters during a second playthrough.

Teratopia is a by the numbers action platformer though, so don’t expect anything more than you should based on its budget price tag. The games that inspired it have better visuals, better gameplay and more content, but for fans of the genre this is a nice and affordable way to spend a couple of hours platforming and fighting your way through a colorful world that has 13 zones to conquer. The bright graphics and lighthearted music and atmosphere make for a nice diversion for a weekend afternoon.

We’ve regularly covered Synth Riders as one of our favorite rhythm-based VR titles, and part of that is that developer Kluge has been putting out new content for the game on a regular basis. The latest chapter is dubbed the “Synthwave Essentials 2” pack, and as with the previous packs every owner of the game is getting part of the new content for free.

In this case, eight new tracks are being introduced, and three of them (by 3FORCE, Essenger and NINA) are free. The five other tracks also introduce the most “mainstream” artists for the game yet, as the developers have signed two tracks from Muse to the game – “Algorithm” and “The Dark Side” have been included. It’s great to see bigger bands jump aboard the Synth Riders train, and we hope it’s a sign of things to come as well.

In addition, “Algorithm” also introduces a brand new audiovisual approach to the game, which the developers label an ‘experience’. Rather than just sticking to the core mechanics and base look and feel that other songs in the game have, this one features strongly enhanced visuals to really make the graphics as much a part of the artistic experience as the music is. We’re hoping this approach is going to be applied to more (existing and upcoming) songs in the future as well, but it’s a sign that Synth Riders just keeps growing and getting better.

Golden Force comes to Switch and PC on the 28th

If you enjoy action platformers with a distinct retro kind of audiovisual appeal, then Golden Force from Storybird Studio and No Gravity Games is one to look out for. They’re currently putting final touched on a patch that’s due out around the launch date, but both the Switch and PC versions are coming next week.

Visually, the game takes more than a few cues from 16 platformers from the SNES era as well as arcade games like Mega Twins and the Monster Boy series, but there’s a resemblance to the Shantae series from WayForward as well. If the gameplay is anywhere near that level remains to be seen as we await a patch that should iron out a few performance issues for the Switch version, but with boss fights, support for 2 player co-op and four different characters to play as, we’re hoping it turns out well.