NIS America is releasing a new entry in the Fallen Legion franchise this week on the PlayStation 4 (and on the Nintendo Switch). How does Fallen Legion Revenants stack up against the previous entries in the series? We checked out the PS4 version to find out.

When we reviewed Fallen Legion back in 2017, it had a novel multi-platform approach with simultaneously released games for the PS4 and Vita – both of which revealed a different side of the narrative. To this day, it’s a refreshing approach that we haven’t seen elsewhere, but in 2021 the development team has opted for a single platform release now that the Vita has lost much of Sony’s support as a platform.

Fallen Legion Revevants does still offer that dual perspective element though, albeit in a different way. You control two different characters who are in different places within the game world, and thus you switch back and forth between them and their role in the narrative. On one side there’s Lucien, who is a politician inside Welkin Castle – mankind’s last safe spot after the world was overrun with miasma. Then there’s Rowena, who is a ghost determined to come back to the land of the living so she can be with her son. Lucien and Rowena end up joining forces in a bid to overthrow Welin’s corrupt leadership, each character signifying a different side of the same coin with their own gameplay style. 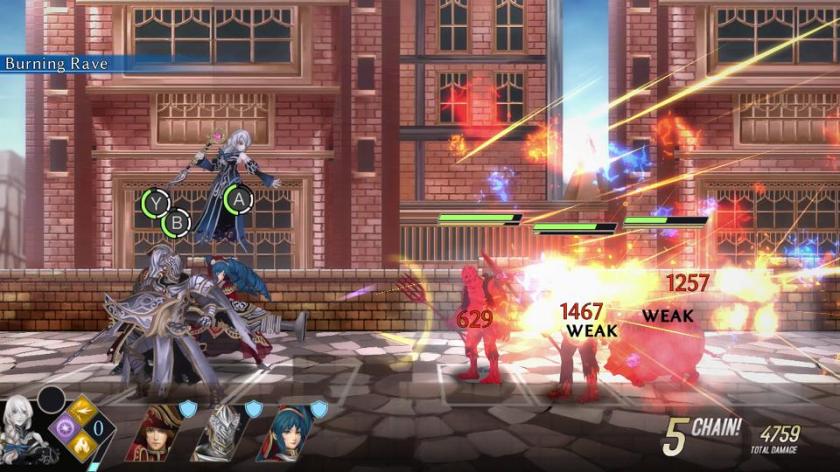 As Rowena, you’ll frequently engage in combat, but as Lucien you’re mostly just exploring Welkin castle to help Rowena prepare for her battles while engaging with NPC characters along the way. Once you’re done picking up items, investigating and preparing during the time that’s given to you, the perspective changes to Rowena in combat, which will be instantly familiar to those who played the previous games in the series.

A combat mission typically features Rowena and three Exemplar soldiers charging at the enemy for some fast-paced combat, with action points that automatically recharge as you start spamming your controller’s face buttons. As with the previous game, you can get away with this tactic for a while, but eventually you’ll need to master mixing up your attacks with special moves and abilities as well – otherwise you’ll leave yourself vulnerable while you wait for action points to recharge. Heal in time, and parry an enemy’s attack when given the change, and you can beat even the toughest of opponents. Boss fights, for that reason, provide some of the most satisfying gameplay moments in Fallen Legion Revenants.

As with the gameplay, the visual style for Revenants will also feel quite familiar to those who played previous Fallen Legion games. With echoes of games like Odin Sphere, there is some excellent artwork at play here, and even though it’s not as fresh as Fallen Legion was in 2017 it’s still a joy to look at.

With the combat feeling so similar to what came before, however, it feels like Fallen Legion Revenants doesn’t offer enough to existing fans who has to wait 3.5 years for this sequel to arrive. It lacks the innovative hook of having a companion game of sorts on the Vita, and combat doesn’t feel like it expands on what was already there either. If you enjoyed the previous titles, however, then the odds are that you’ll like this one as well – just don’t expect anything too different.