With two new console ports and one title that just went into Early Access, it’s been another interesting week for indies. Here are Bladed Fury, Quinterra and SturmFront – The Mutant War: Übel Edition.

Developed and published by NExT Studios, Bladed Fury came out on Steam as a PC exclusive back in 2018 and was just ported over to consoles. It’s available for PlayStation, Xbox and the Nintendo Switch, with full compatibility with next gen systems as well.

What’s striking about Bladed Fury isn’t just its action platforming, but its gorgeous art style in particular. Inspired by Chinese art styles, history and culture, the game weaves a story of strife and betrayal among dynasties in ancient China – nothing new if you’re been playing games like Total War – Three Kingdoms of course, but with a completely different approach.

Your part is that of princess Ji, wrongfully accused of murdering your father. Proving your innocence and getting back at those who betrayed you means traversing 2D action platformer levels that rely on combat and agility – while rewarding exploration through orbs that you can collect and spend. Green ones are spent on your health, yellow ones represent money for upgrades to your various attacks. In addition, defeating bosses also gives you access to some of their powerful special attacks – though they can’t readily be used in combat and rely on a cooldown period. 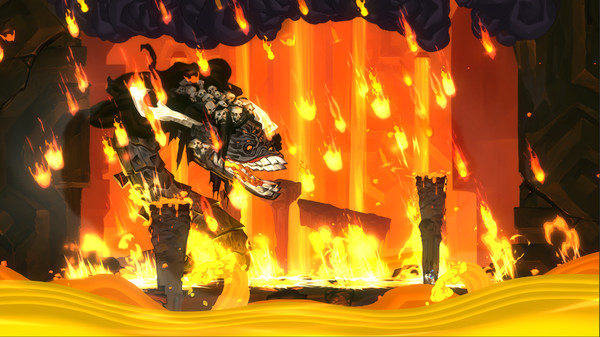 The combat system, featuring light and heavy attacks as well as the ability to dodge and block, feels intuitive and responsive – partly because it doesn’t do anything that’s particularly new, and also because combat, for the most part, is quite forgiving. Bosses are the exception to this and can present quite the challenge, and the spike in difficulty means you’ll run into quite a few death/continue screens. There’s an arcade-like quality to the quick restarts though, so this was never too frustrating.

Bladed Fury’s storytelling also features several side stories that help flesh out the lore behind the main storyline, which is a pleasant exception in an action game. It’s a somewhat short story campaign, but a lovely diversion for fans of the genre thanks to its solid gameplay and wonderful art style.

Billed as a roguelite turn-based strategy game, Quinterra has just launched into Steam’s Early Access program. Developed by Sidereal Studio, it combines elements of strategy with tabletop mechanics – something that also echoes in the finely crafted units and hex-shaped look and feel. With four different species to choose from and over 100 units to play with (and over 100 non-playable ones as well), this is one that’s heavy on content even in this Early Access phase.

Hundreds of abilities and pieces of equipment give you tons of customization options, and forging a successful army is going to require tactical decision-making. Because the game features five different domains/worlds and each playthrough crafts a unique journey through three of them (including your home world), Quinterra promises a ton of replay value, and at its indie price point it’s looking like an absolute steal.

SturmFront – The Mutant War: Übel Edition is now on consoles

Another port of a game that was previously released on Steam, SturmFront – The Mutant War is now available on all major consoles as well. It taps heavily into the retro vibe with its overhead shooter gameplay, so we couldn’t wait to try it out.

The developers at Andrade Games must have been fans of classic franchises like Ikari Warriors, Commando, Total Carnage and Mercs, because SturmFront feels like an homage to those (arcade) gems of the past. As a cyborg called Siegfried van Hammerstein, you’re taking on mutants using a gun and flamethrower, but as is the norm for this genre the story takes a back seat to the arcade action on the screen. 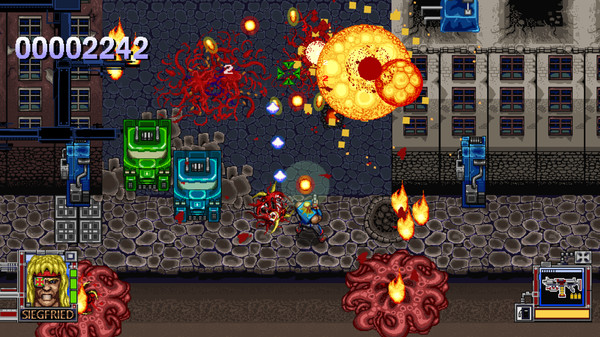 Controls are intuitive to the point of being self-explanatory, though SturmFront does use the modern convenience of the right thumbstick for aiming where past games were of the “shoot in the direction you’re facing” variety because of hardware limitations – especially in home conversions. But as with the games that inspired it, you can go nuts with your main weapons but can also pick up extra powerful weapons that you can use until their ammo runs out.

Levels are generally quite short, but filled to the brim with enemies and the occasional boss fight. There are only five stages to get through though, so there’s a definite arcade feel to the game in terms of the length of the campaign. There’s replay value in tackling higher difficulty levels or going for the missing trophies, but generally speaking you’re getting what you paid for in this budget-priced offering.

SturmFront doesn’t try to innovate on what came before, and rather feels like an homage of sorts. One thing that’s sorely missing is support for two player co-op gameplay though, as there types of games were always better together. If you can live with and are nostalgic about top down shooters like this, then you’ve got a nice little diversion here. 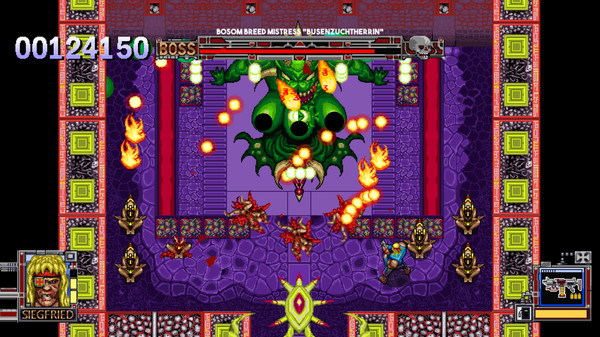