Three very different releases up today – a movie adaptation in VR with Zombieland VR – Headshot Fever, a short narrative-driven that comes out very soon called Forgotten Fields, and a board game adaptation that doesn’t play like a board game: Arkham Horror: Mother’s Embrace.

A title like Zombieland VR – Headshot Fever doesn’t leave much to the imagination, now does it? If you were expecting a fairly by-the-book shooter with the Zombieland license attached to it, then you wouldn’t be wrong. Still, it’s a franchise that’s fun and likes to poke fun at itself, so we were eager to put on the Quest and try it out. There’s also a Rift version, with other versions coming later.

In Zombieland VR, you play alongside the movie’s lead characters Tallahassee, Columbus, Wichita, and Little Rock – who thanks to the license look enough like the real life actors even though they feel like PS2/PS3-era models. They’re also voiced, although only Abigail Breslin added her voice talents to the game and the rest are sound-alikes, apparently including Woody Harrelson’s own brother that you probably didn’t know he had.

The cast doesn’t actually join you in-game, but rather acts as a supporting crew that adds some of that Zombieland wit in between levels while also supplying you with commentary and an assortment of weapons and supplies.

Missions are typically very short, and the main objective is to – you guessed it – kill off the zombie folk that inhabit the level. Gameplay is reminiscent of on rails shooters like House of the Dead or Mad Dog McCree, although modern gameplay elements like score multipliers have been added as well. Some of this ties into the Zombieland franchise by smartly playing into the “double tap” rule, opening the way up to combos and ‘bullet time’ moments.

Additional objectives add replay value to previously completed levels by offering extra rewards, and some become much easier to attain with abilities to earn later on in the game. Keeping your eyes open for fun little visual jokes that are in line with what you’d expect from the franchise. The actual gameplay isn’t much more than functional, but the license definitely makes it fun. We’ve certainly seen better looking games, even on the Quest, but if you’re a Zombieland fan you’ll get a kick out of this one.

Rainswept by Frostwood Interactive is one of those games that we didn’t notice until it was ported to consoles, and we really enjoyed it. Now, Frostwood’s next game is on the horizon, as it’s due to appear on Steam in just a few days, releasing on the 14th.

In Forgotten Fields, you’re a writer struggling with a creative block, taking part in a short story that unfolds over the course of a single day. Deadline day, no less – and you need to crank out a story if you are to pay the bills.

This isn’t a stressful adventure though, as protagonist Sid goes through the narrative-driven motions in a story that explores family, friends, interpersonal relationships and the elements of history that make up good stories. Sid gets a last minute invite to come say goodbye to his childhood home, and this obligation naturally intersects with his time-sensitive assignment over the four hours it takes to complete the game.

Although a new and original game, Forgotten Field’s art style echoes the one in Rainswept, so if you enjoyed that you’ll certainly appreciate Forgotten Fields as well. The wait’s nearly over, and there’s a demo available while you wait here.

If “Arkham” makes you think of Batman, no one would blame you. Arkham Horror: Mother’s Embrace has little to do with the caped crusader though, and is instead based on a popular board game from Asmodee. Rather than a straight up conversion of the board game, this one’s a turn based strategy RPG with a detective theme, so it’s a bit of a departure for Asmodee Digital. Out for PCs and consoles, we were curious to see how it turned out.

The ‘horror’ element of the title refers to the Lovecraftian setting for the board game, which carries over to this digital adaptation as well. This is a single player adventure though, which is definitely surprising in this genre, and casts you as a detective trying to figure out what happened when a cult murders an older lady. Along the way, you’ll meet several interesting characters, including several fellow detectives, and for a board game adaptation Arkham Horror has a surprisingly strong narrative with well fleshed out characters. 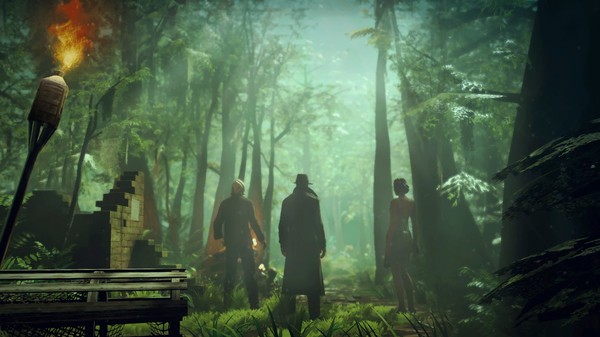 The eclectic cast is supported by interesting gameplay mechanics as well, which include the ability to incur curses and/or long-lasting trauma – both things that tie in well with the psychological horror we usually associate with anything Lovecraftian. Having the sense that you’re part of a team that’s working on this mystery together also adds to the illusion that you’re playing a board game session, even though you’re by yourself for this one.

Things go downhill a bit once you engage with the game’s combat mechanics though, which are overly simple in comparison to other SRPGs and don’t live up to the rich narrative backdrop either. Once you developer a decent grasp of the inventory system and go into battle with a proper loadout, combat becomes almost formulaic and doesn’t provide the kind of satisfaction that you get from other tactical and/or strategic RPGs, which is a shame. Perhaps the board game leans more heavily on social banter, but in a single player RPG it’s going to be the gameplay mechanics that people focus on.

Arkham Horror: Mother’s Embrace is a bold and interesting take on a board game – but although we enjoyed the setting (and have subsequently become interested in the board game!) the gameplay mechanics didn’t quite gel together. Unimpressive visuals don’t help, but we’re hoping Asmodee will continue on this track because it’s a good showcase for how videogame adaptations can enrich a board game’s narrative.