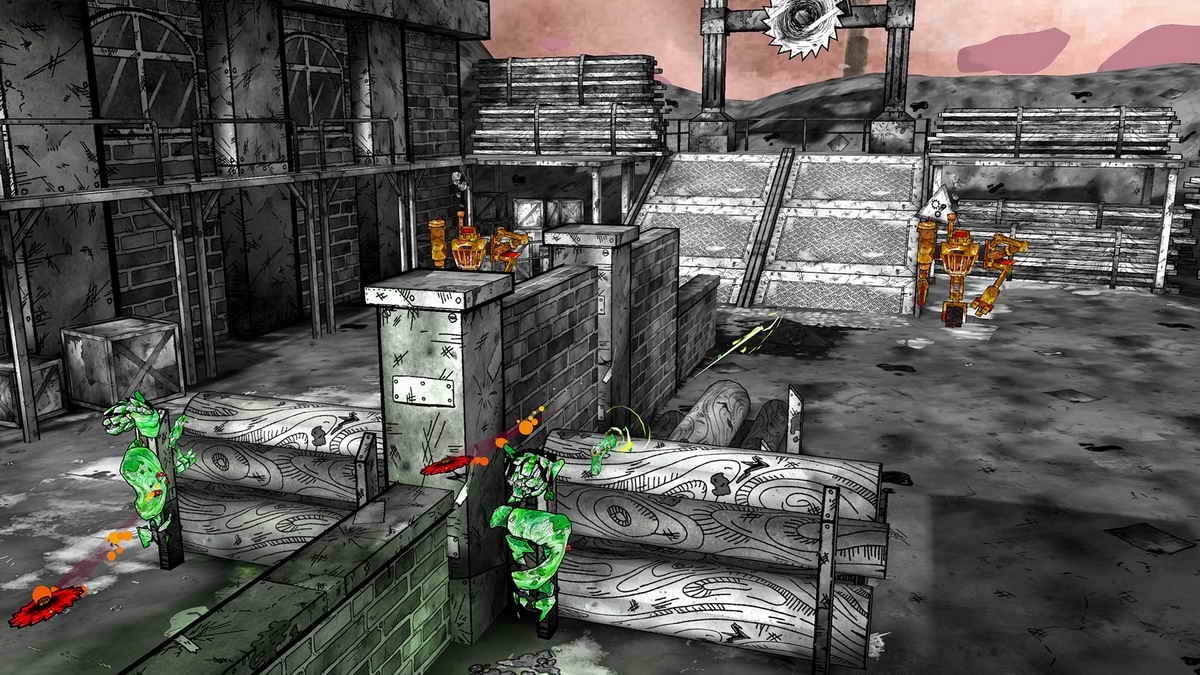 We’ll have a lot more Gamescom coverage for you in the upcoming weeks, but here’s a look at an upcoming VR game that’s promising to be something rather special for puzzle fans. We also have exclusive gameplay footage to share with you, so without further ado – here is We Are One.

Already available on the AppLab, We Are One has been a runaway success during its development phase, with the highest-rated demo on the marketplace right now. It describes itself as a puzzle shooter, but its main mechanics and draw definitely lean more towards the puzzle side of things – and there’s a brilliant hook that works really well in VR.

Our gameplay footage below will no doubt make this much more clear than we can in plain text, but the general idea in each level is that you have to take out a selection of robot adversaries in order to complete the level, and to do this you have to create time loops. And that may sound vague, so let’s try it with a practical example. You might start a level in a spot where you can see the enemy, but have no access to any weapons and ammo or a clear line of sight. You can then transport yourself over to a spot that does have the ammo, but getting close to the enemy means he’ll start firing at you.

To save time, you can move towards the weapon and ammo, and then toss it over to another spot before ending the time loop. On your next time loop, you move towards the spot where you just threw the weapon, making sure you get there just in time to catch it and shoot the enemy before he has time to take you down. It’s a concept that’s deceptively simple at first, but when you start putting down time loops that “work” in the harder levels you’ll quickly notice that it’s a tricky and addictive process.

During Gamescom, we met with developer/publisher Fast Travel Games to check out We Are One with developer Flat Head Studio. Co-Founder and Programmer Arnold Holler talked us through the basic concepts of the game, after we dove in for a brand new hands-on demo of the game that gradually introduced the game’s core concepts to us. They were also gracious enough to share the gameplay footage with us, which in turn lets us share it with our readers.

As puzzle game fans who happen to enjoy VR and all things time travel, it was easy to instantly fall in love with We Are One’s core concept. The few puzzles we played were also expertly designed, by which we mean that there was a nice balance between experimentation and progress where you don’t always instantly know what to do but always have the sense that you’ll be able to get there eventually.

The game definitely isn’t the most stunning VR game out there, but a clean cell-shaded look full of color and contrast works great when trying to get your bearings and work together with your fellow selves. It’s the kind of contrast-rich environment that also worked for Superhot, which was a landmark VR concept at the time as well. We Are One is a bit more niche in its puzzle gameplay approach, but with a good combination of motion control/shooting mechanics and some solid puzzle designs, it just shot right up to our most wanted VR titles list after playing it.

What we’re hoping for is that the game will be a bit more fleshed out in terms of the story and narrative experience to help guide you through its campaign, but what we can already see if that the puzzle designs and gameplay fundamentals are going to be something special that takes full advantage of VR – we can’t wait to see more of it.