Microids has just released their next/current gen versions of XIII, a title they remade back in 2020. It’s almost twenty years after the original game was released, so is the new version worth playing? We played it on a PS5 to find out.

The original XIII is a bit of a modern classic, blending first person shooting action with a “Manchurian Candidate”-like spy narrative that brought a cinematic spin to a genre where it wasn’t commonplace, with a sense of style that made it feel even more unique. Its cel-shaded and comic-like presentation came from the story’s origins as a Belgian comic, which has since also been turned into a feature film and a TV series.

It was sad to see the remake get panned back in 2020, and although we didn’t play it we saw enough to agree with the fact that it was full of technical issues and had an art style that didn’t do justice to the original either. Microids then pleasantly surprised us by announcing that they were moving forward with a complete overhaul of the game with a new developer (a remake of the remake, so to speak), in order to give fans what they were hoping for. It may be two years later, but it looks like they’ve largely succeeded. 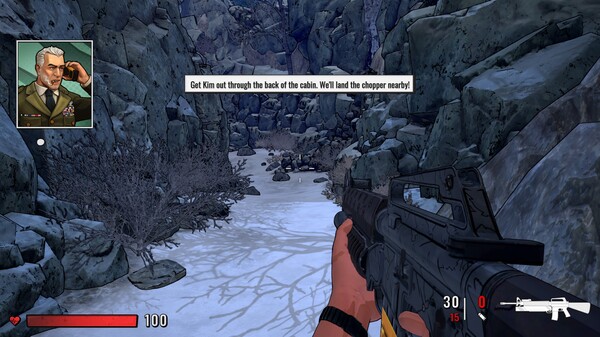 Of course the core plot is still the same that it was two decades ago, so you’re still an agent called XIII who wakes up with memory loss and then gets sucked into a story of intrigue and betrayal over the course of (naturally) thirteen chapters. Spy thrillers are a rare genre in gaming, and this David Duchovny-starring example has a nicely paced story – told in a linear fashion. You can opt for a more stealthy approach with a crossbow, or go in guns blazing – though the availability of weapons and ammo sometimes makes the choice for you, as does the fact that stealth isn’t as refined as it is in other games.

At this point in time, XIII feels like a retro shooter, but not in the way that others in that genre approach it – often by rocking Doom/Hexen like-visuals that date the game visually. Here, the retro flavor comes from the lack of open world opportunities and vehicle-based traversal options. For gamers just looking to get through a story-driven single player campaign without having to explore every nook and cranny, it’s a welcome throwback.

Visually, the new version of XIII looks good, though cel-shading has come a long way since XIII pioneered it back in the day. Games like Borderlands have certainly raised the bar, but certain style elements in XIII have aged very well, including the comic book-inspired visual effects, like on-screen text appearing in the middle of a 3D environment to denote sound coming from that direction – as it would in a printed comic.

Surprisingly they’ve also kept (or rather restored) the multiplayer portion of the game – an element we had completely forgotten ever existed in the first place as XIII is such a story-centric game. We can’t see the multiplayer element going very far, but for fans who want the complete experience it’s great that it’s there, and perhaps small groups of people can set up multiplayer sessions to make sure the lobbies aren’t as empty as they were when we were testing.

XIII may have its limitations, but we’re very excited that some publishers are committed to delivering upon their original vision when an initial release doesn’t live up to it. That’s what Microids did here, and the end result is a nice upgrade of the original game that lets you enjoy its spy thriller narrative the way that we did back in 2003. And it’s a free upgrade for those who bought the 2020 version as well, so kudos to Microids for a job well done.