From unknown developer Juicy Cupcake comes Brief Battles, out now on Xbox One, PC and Playstation 4. Read on to find out why this was been one of this year’s most pleasant surprises so far.

With terms like ‘underwear-fueled’, ‘butt-em-up’ and ‘underwearriors’ featuring heavily in the promo materials for Brief Battles, I certainly had my doubts about the game. Was it just going to be a silly premise in an otherwise generic indie game? Luckily, the quality of the game quickly made me forget that it was trying to sell me a ‘clash of cabooses’.

Essentially a multiplayer platform with combat elements, underwear features mostly in the shape of powerups that change up your abilities. The game can be played solo as well, and there’s a two player cooperative mode, too. Both are well done, but the game really doesn’t begin to shine until you add more players – this can be seen in co-op, but the more, the merrier. 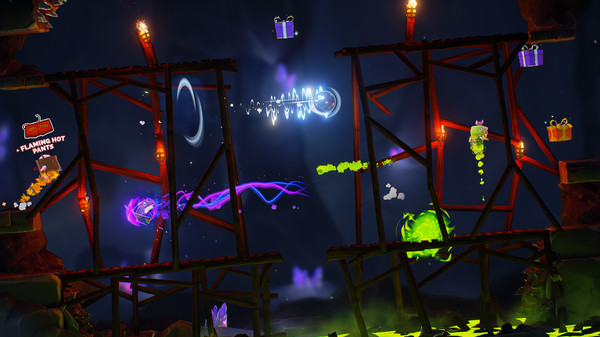 Despite the central theme being about butts and underwear, Brief Battles has some pretty intricate gameplay design. Besides just jumping, you can also scale walls and hang from ceilings, and this opens up options for some verticality that is used to great effect in many of the level designs. Because of this, the jumping mechanism is quite refined in Brief Battles as well. There’s your pretty standard jump and double jump, but you can also hit triangle for an extra high single jump. Once airborne, you can also perform butt-slams, which is how you take out your opponents in the game.

Then there’s a collection of special underwear as well – with seven different kinds awarding you with different types of boosts to your abilities. Most are fairly recognizable in that they award things like extra strength or more speed, but they often come with a trade-off, adding a tactical element to the gameplay.

It’s also nice to see that Brief Battles features more than just the basic party mode-centered gameplay option. Several modes and challenges are available, ranging from single player to four player multiplayer affairs – some of which need to be unlocked through playing. Depending on the mode you pick, you’ll even run into boss fights. It’s great to see this kind of attention to detail and gameplay diversity in a smaller title, something that’s certainly not a given.

So beneath the silliness of the core premise, there’s a solid and well-balanced party game here that can be played in a number of ways. It’s accessible enough to cater to gamers of all ages and abilities, and between its replay value and myriad of game modes offers plenty of value for money.