Last week’s Indie Arena Booth at Gamescom wasn’t just full of indie titles that are going to come out in the next few weeks or month (or in some cases years!), but also featured a couple of games you can already get your hands on because they’ve been released. One of these games was reky, from Greek developer beyondthosehills, which was published through Plug In Digital earlier this year. We spoke to the team at beyondthosehills about the development process behind reky.

How did you come up with reky?

We wanted to develop an abstract logic spatial puzzle in a minimalistic environment. Our goal was to create a new puzzle having new mechanics, new logic, utilising a unique visual language. Inspired by the minimalistic and Bauhaus architecture culture, we wanted to make a puzzle game only with the most necessary elements.

In the beginning, we created a bunch of new mechanics with only cubes, lines, exits and portals. Our next goal was to create levels with gradually escalating difficulty and at the same time keeping the same basic mechanics in different contexts.

Starting prototyping at the end of 2015, we were inspired by many indie mobile games that had quality production, polished visuals and fresh gameplay such as Blek.

What sets the game apart from other puzzle games?

We have created a game that has a unique identity both visually and functionally. Maybe it’s not mind-blowingly innovative, but it’s unique. Similarities with other games are the isometric camera view and that the character’s goal is to create the path to the level’s exit. Other than that we believe that the mechanics are new.

How did you eventually settle on a visual style?

At first, the graphic design was only white cubes with a discreet black outline. We developed several new puzzle logic ideas on that visual environment, using a level editor that we created especially for this game. After creating most of the puzzles, we started to research the right art direction that could support the game mechanics. Having a discrete visual idea, we collaborated with an architect to create the architectural designs of each level, working on several iterations until the appropriate shape came into life. After creating all the architectural structures of all levels, there was another process in order to transform them to the final visual style, using custom post-processing effects and shaders.

Who’s been working on the game at beyondthosehills?

beyondthosehills is the games development studio of Andreas Diktyopoulos and Maria Aloupi, located in Athens, Greece. beyondthosehills is the outcome of the collaboration of members having a strong scientific and artistic background that stemmed from the experience gained by an active career as developers, musicians, artists, producers, and curators. 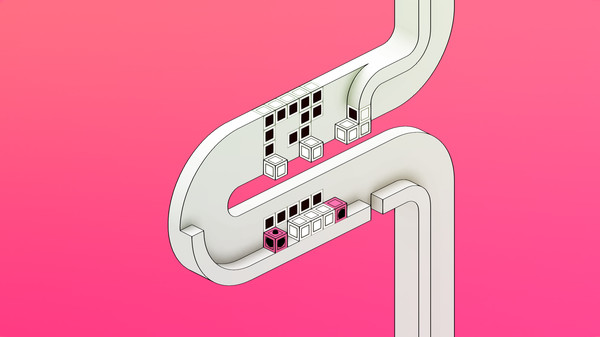 Reky’s credits include Andreas as the Creative Director, Art Director and developer. He created the initial idea of the core concept, the visual aesthetics and the mechanics of the game.

We also had Maria as the game/level designer, musician and game producer. She created all the levels of the game, the music and the sounds, and was responsible for the production.

After 2 years of development, we collaborated with the architect Kostantinos Sfikas. He is the architectural designer and contributed to the UI of the game. He created the beautiful structures of the levels.

What are some of the design challenges you had to tackle?

One of the main challenges was the overall UX; how to define the player interaction logic with the world in order to be as simple as possible. Also, it was quite tricky to achieve this specific visual style using custom shaders, post-processing effects and to define a workflow for the creation of the assets. In the field of level design, to find new logic ideas using the exact same mechanics was a real challenge. Another challenge was the escalation of the level design. Maria created more than 150 levels in order to select the final appropriate 96 levels after many iterations.

Reky was released at the height of the corona pandemic – did this affect the development of the game?

Crazy times! reky was released in October 2019 for iOS first and as a result has been featured by Apple as “Incredible Indie”, “Game of the Day” etc, has been selected and presented at Leftfield selection of EGX, Day of the Devs / Los Angeles among others.

During the corona pandemic & lockdown reky was prepared to be released on May 27th 2020 on PC & android. The PC version has been selected to be exhibited in the special collection @Ludicious festival 2020, Indie Arena Booth 2020, and in addition, reky won a merit for the art direction at “EBGE design awards 2020”.

All that was great, but we have missed all the opportunities to go in person at the conferences as most of them happened digitally or were cancelled. Regardless of the amazing work of the people organizing the festivals digitally, the physical human presence can not easily be replaced by any other media. It is too early to say retrospectively what exactly we are missing due to the pandemic, but we had quite awkward times with the whole situation and the isolation.

What do you hope people will take away from the experience of playing reky?

We want to introduce the players to a specific aesthetic (visually and audibly) and at the same time to challenge their minds. Also, we love to create relaxing digital experiences as an antidote to stressful times.