Destined to be a top selling item during the holiday season, Starlink: Battle for Atlas is Ubisoft’s attempt to breathe new life into the toys-to-life genre. It’s out for Xbox One, Playstation 4 and Nintendo Switch – we played it on a Playstation 4 Pro for this review.

Within an impressive lineup across the board at E3 and Gamescom, Ubisoft’s Starlink stood out. Next to the likes of Assassin’s Creed, Trials Rising, The Crew 2 and The Division 2, their move to take a stab at the toys to life genre felt like a bold one. After all, we’ve seen Skylanders and Disney Infinity kits gradually vanish from stores, and the same thing recently happened to LEGO Dimensions. I still see some of Nintendo’s Amiibo characters here and there, but that’s about it.

But where most toys-to-life games in the past relied on RFID technology where you place figures on a portal, Starlink’s developers have created their own system – and it feels both innovative and cool to play with. A Starlink starter kit features a spaceship, pilot, and a selection of weapons you can attach to your craft. There’s a mount that you attach to your gamepad, and you plug your pilot into it before fitting his/her spaceship on top. Placing and replacing elements instantly changes the on-screen representation of your ship, which makes swapping weapons in and out a highlight for the game.

You have your standard cannons, but can trade out one or both of them on the fly – and even mount them on top of one another. The change isn’t just cosmetic either, as different enemies have different weaknesses and the right weapons loadout might just take advantage of that fact. Plugging in ships, pilots and weapons feels a little bit like plugging something into a USB port, and although components are easy to take off they are secured solid on your space fighter while playing.

An open world by nature, Starlink – Battle for Atlas leaves you free to explore a galaxy and switch from deep space to planet surfaces in doing so. However, there’s also a story-driven campaign, which talks about the origins of the Starlink Initiative and how mankind started exploring the Atlas system after encountering Judge, an alien that crash landed on earth. When you reach Atlas, your lead scientist (who made the Starlink initiative possible) is quickly kidnapped by a mysterious group – which is how you learn about Grax, the main villain in the game.

It sounds like a great setup for an epic sci-fi tale, but Starlink’s story is relatively generic and uninspired – which is partly because it’s directed at a younger audience. It feels like there’s some untapped potential here and I hope they’re not going the DLC route to craft a richer narrative experience. You see, one of the great aspects about the actual “toys to life” angle behind Starlink is that you’re not even required to purchase tons and tons of toys to unlock everything – you can complete the game with just the starter kit and there’s no content that’s locked behind a paywall (as was the case with Skylanders, Infinity and the many LEGO Dimensions expansions). That’s great news for parents, who will think “what am I getting myself into?” when they hear the term toy-to-life. 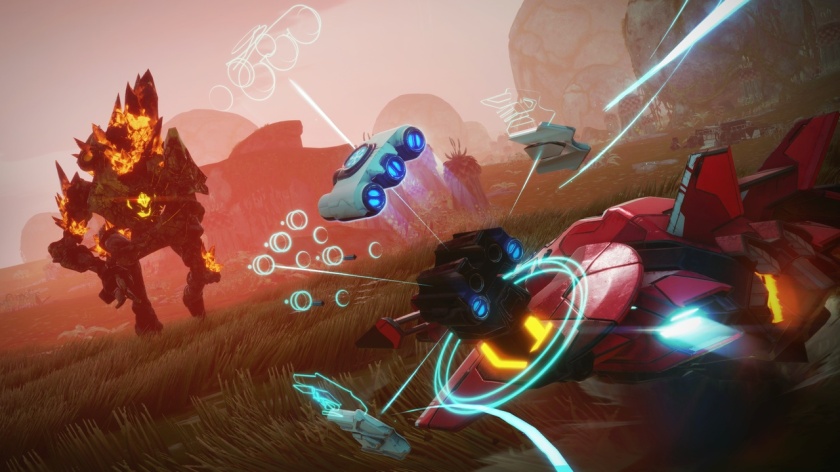 Nearly every physical component can also be bought digitally (which is cheaper), but obviously the experience wouldn’t be the same. Digital purchases are also tied to the system you buy them on, while their physical counterparts can be transferred across all systems. There’s one exception though, which is the Starfox-themed ship and pilot that’s exclusive to the Switch.

Pilots, ships and weapons all have different abilities, so swapping (and thus buying addons) is encouraged. In my experience, this was a lot of fun during the initial playthrough, but playing through the same story with a different character from the start again didn’t feel like it was going to be radically different – which is also a shame, although I realize this would have meant exclusive content and thus a paywall of sorts.

I don’t think Starlink would work well as a digital-only space shooter – its content is simply too unremarkable for the price it costs to unlock everything. What you want to play Starlink for is the ability to customize your modular craft(s) and try out how things work in battle. Your ship does weigh down the controller a bit, which might be bothersome for younger children, but my experience was that all the components were actually lighter in weight than they looked. Ships look powerful, and the little pilots and weapons are packed with minute little details. Starlink also makes your pilot come alive more than other franchises did, as they and their personality are included in the narrative rather than just being little avatars without much voice or character of their own while in-game.

Starlink – Battle for Atlas is a fun way of combining physical toys with a digital sci-fi environment, and it does so without resorting to that “put a character on a portal and then see him on-screen” mechanic we’ve seen a bunch of times already. We’ve also seen character customization in other titles (through upgrades), but being able to customize physically is certainly a cool new feature that galactic explorers will enjoy. Not mature enough as a game for the solo adult gamer, but heaps of fun when played as some family-friendly entertainment. And doesn’t everyone love it when their kids go “everyone, look at this!”, especially during the holidays?