Time to take a look at a trio of titles that recently made the leap to new platforms. Shattered – Tale of the Forgotten King was just released on PlayStation, Parkasaurus came out for the Nintendo Switch and The Sorrowvirus – A Faceless Short Story launched on all consoles after an earlier PC release.

Redlock Studio originally released Shattered – Tale of the Forgotten King just over a year ago on Steam after a long period in Early Access, and now it’s come to PlayStation as well. It’s an ambitious project that was inspired by the likes of Dark Souls, so we were eager to try it out.

It’s hard to ignore the similarities with the soulslike-genre when playing Shattered – Tale of the Forgotten King. There’s a story and it’s drip-fed through fragments so it never feels as story-driven despite the “tale” in the title, there is challenging combat, resource management and there are even more challenging boss fights. There are differences like a higher reliance on platforming, but the source of inspiration is clear. 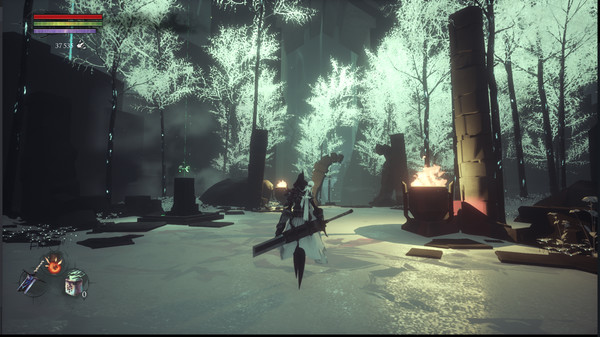 The game takes place in a world called Hypnos, and you’ll have to piece together what transpired surrounding the disappearance of a king and a reality that has fallen apart. What’s true and what’s not becomes hard to figure out, and the exploration-driven nature of the campaign is helped by some well-written lore and an interesting premise for those who enjoy dark fantasy.

Gameplay-wise, a tutorial helps you get your bearings, but those who have played similar titles before will instantly be comfortable with the game’s attacks and rolls. The combat generally works well too, but at certain moments it just doesn’t feel as responsive as things do in FromSoftware’s titles. This can cause mild frustrations mid-combat when your warrior displays a seemingly delayed response, but never to the point where it’s game-breaking.

The game world in Shattered – Tale of the Forgotten King might not be as impressive as the work on the PS5 version of Demon’s Souls, but for a production from a smaller team this is a gorgeous game world with well designed environments and bosses. It plays like a typical 3D action adventure/RPG at times, but the switch to some 2.5 platforming also gives it an identity that’s unique among the genre – changing the gameplay flow to include something beyond combat, gathering resources and leveling up your character. 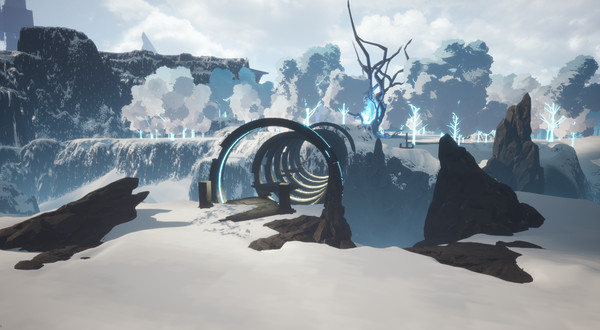 When the PC version launched, even after the 1.0 version hit the market, players would complain about performance issues, but we had an excellent time with the console version playing on a PlayStation 4 Pro. It may have taken a while to get here, but it was worth the wait and those who enjoy a slightly more light-hearted take on the souls-like genre should definitely check out Shattered – Tale of the Forgotten King. With solid gameplay and a well-realized game world, along with a pleasant price tag, it’s a nice addition to the PlayStation library.

Washbear Studio might not be a household name (yet), but it’s a small indie studio made up of two guys who previously worked at Drinkbox Studios – reason enough for us to take note of them. Their debut game Parkasaurus came out on Steam back in 2020, and they’ve now brought it to the Nintendo Switch as well. It’s an interesting blend of Zoo Tycoon and Jurassic World Evolution with an indie flavor to it thanks to some colorful low-detail visuals.

This creates a cartoon-like visual style, which translates well to a game that knows not to take itself too seriously. You’ll notice this in the game’s sandbox mode, where your colorful dinosaur can be equipped with silly hats, but also in the included campaign mode. This partly serves as a tutorial, but also includes a plotline that involves dinosaurs crashing on earth on a spaceship and hoping to repair it by completing missions. Sure, it’s not very “sim-like”, but it also helps to set it apart from other games in the genre.

Parkasaurus’ mechanics will be familiar to fans of the park/zoo tycoon genre, with research to complete, buildings and decorations to place and animals to look after. Sure, new fossils are acquired by traveling through a space-time portal, but it’s familiar stuff and you can customize the experience to make things easier or harder on yourself in terms of having to work within a budget and generate income if you want to invest.

For those who have been playing games like the original Rollercoaster Tycoon and Zoo Tycoon, it’s an almost nostalgic experience too – returning the genre to a grid-like map that helps with planning. It’s also a throwback to when most of these games were PC exclusives, and you can kind of tell why when playing the Switch version. Besides a few performance issues that we can see getting fixed with a post-launch patch, the user interface – especially when it comes to text – feels like it was designed for a PC monitor and keyboard/mouse controls, especially when you play in handheld mode. It’s a charming experience nonetheless though, and we certainly don’t have enough tycoon/sim-type titles on the Switch yet.

Originally released on Steam by Watchmaker/Alan Sklar, The Sorrowvirus – A Faceless Short Story has now been brought to consoles through Eastasiasoft. Out for all major platforms, we played it on a PS4.

The game is apparently part of a larger universe, but we’re not familiar with the “Faceless” series and the game can be played without any problems as a standalone experience. With a playthrough length of just under an hour it certainly lived up to its title, but for a story-driven experience there’s a surprising amount of replay value here as well.

The Sorrowvirus: A Faceless Short Story centers around Wyatt Heyll, a young man who is gravely ill and balances on the verge of life and death. His parents aren’t ready to let him go though, so they inject him with a substance called the Sorrowvirus, which prevents him from passing on to the afterlife – instead holding his soul in purgatory before returning to his body, which grows ever sicker while his parents continue looking for a cure.

The cycle wears on Wyatt, who wants to just be done with it all, and this is what creates an interesting loop with impactful choices and dialogues, as well as multiple different endings that you can discover on subsequent replays. And while The Sorrowvirus could have probably worked well as a visual novel type of game, its story is delivered as a first person adventure – which works great in terms of delivering an atmosphere of dread and scaring players with a few effective jumpscares. Adventure gaming fans will also notice a fun and fitting crossover with Killmonday’s Fran Bow, and with the inclusion of voice acting this is an excellent little indie with solid production values. It’s a shame it’s quite a bit more expensive than the PC original though, especially because it’s rather short.