Demeo’s been making waves in the VR community recently, and now that it’s out for the Quest as well as PC-based VR setups, we wanted to see what all the fuss was about. Developed and published by Resolution Games (of Carly and the Reaperman and Angry Birds VR fame), we used a pair of Quests for this review.

A pair of Quests? Yes, Demeo is a multiplayer title that can be enjoyed with up to three other players, and gets easier and more fun when more join your band of questers. From that perspective, it’s very much the thing it’s trying to emulate: a classic table top RPG experience.

The excellent Oculus Touch controllers are certainly a blessing here, as you’ll be using in-game hands to control your characters through the dungeon you see and the excellent hand and finger tracking of the Touch makes sure that the immersion doesn’t get broken – which is also true when you ‘physically’ play your action cards during a round.

Speaking of immersion – one thing that frequently holds people back from table top RPGs is the amount of work involved in building your game worlds. Using glue and paint for your armies is one thing, but building all the scenery and dungeons is a step too far for all but the true hobbyists out there. Demeo has that part covered for you, by giving you a finely crafted dungeon to play in mere seconds after starting a new game.

Although you can’t actually see each other, Demeo is best enjoyed when you gather around the virtual table with a few friends. It’s not strictly multiplayer-only though, as you do have the option to play solo and control multiple characters by yourself. It’s worth it as a tutorial of sorts, but Demeo really shines in multiplayer. Here, each player gets 2 action points each turn, which can be spent on moves, attacking and/or playing cards that you were dealt.

Combat also involves – as it does in TTRPGs – throwing virtual dice around the table. Attacks are character-specific, and playing them or using a card is all handled through easy-to-use controls. You can pick up your character and select an action by moving him to the right on-screen spot, or play cards – and for whatever is out of reach you use a laser pointer, though you can also move around the table. 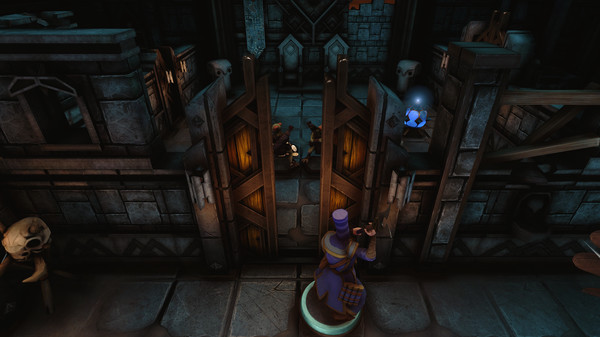 When you play a game in Demeo, it consists of three rounds, during which you’ll need to kill the enemy and grab the key that unlocks the next stage of your adventure. In between, you can spend your hard-earned loot on upgrades and cards that you can take with you, so there’s a bit of character growth in each game as well. You start with a blank slate when you restart, so experimenting a bit is encouraged – and you’ll collectively learn from your mistakes, which immediately hooks you into trying again if you fail. It’s that social element that’s hard to capture in a single player setting, although getting a game together with friends can also be a challenge – a game of Demeo can take hours, and there’s no way to save mid-game either. The latter is a shame, especially on the Quest where the battery life of the headset can become an issue.

Of course this isn’t our first stab at a VR table top experience, as you might recall our Table of Tales: The Crooked Crown review from two years ago. But while Demeo is also a take on the genre, it’s different enough to warrant having/playing both of them. While Demeo lacks the local multiplayer option of Table of Tales where you could play together with console players in the same room, it does make up for it with the immersion you get from exploring its dungeons together – with limited visibility depending on where your characters are all adding to the immersion. You can choose to change your background from a dark room that lets you focus on the table to a setting where you play inside a retro D&D-style basement, and the character models all look great.

If you’ve been interested in some D&D role playing and getting involved in the rulesets and building process has been keeping you back, then Demeo is an absolute must. It’s also a great way for players to connect in a virtual space when real life isn’t an option, and the replay value (with more content coming post-launch) is excellent. It’s too bad local non-VR multiplayer isn’t an option for groups who prefer that, but we believe non-VR support is in the works so who knows what the future will bring? Unlike its dungeons, Demeo’s future is looking bright.