Time for a look at four new releases, though some of these were previously available on other platforms already. Join us for Deadly Days on the PS4, OCO on Steam, Cardaclysm’s Switch release and the visual novel Crimson Spires.

Developed by Pixelsplit, Deadly Days is one of those games we briefly saw at a trade shows a few years ago but didn’t go hands on with until now. It was originally released on PC about two years ago, and has now made it to additional consoles after an earlier Switch release.

Combining an overhead perspective with roguelite and survival aspects against a zombie backdrop, it’s a game that emphasized fun more than you’d think based on that description. Perhaps the narrative setup that spiked hamburgers are what’s turning people into zombies would have been a good clue there.

Featuring a zoomed out perspective of each level, Deadly Days has tons of small pixel characters inhabiting locations that are brought to life with simple visuals that use color contrast to effectively and quickly distinguish between the various buildings, roads and hordes of the undead – although when you start dropping bombs on them things quickly start looking more and more chaotic. 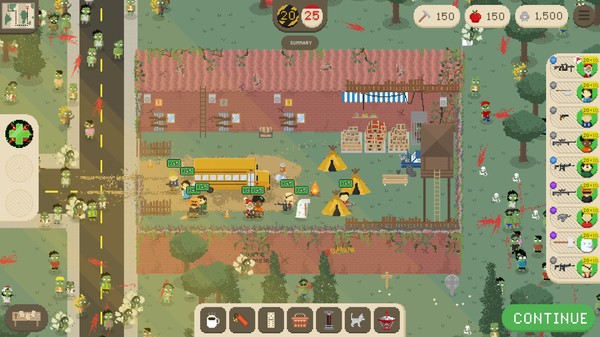 You’ll start your campaign in the safety of your camp, and can earn upgrades by completing missions that require you to gather supplies or rescue survivors – both of which will increase the strength of your camp. Missions get progressively more challenging as well, but the fact that you hold on to your characters for quite a while means it’s hard to see them kick the bucket – even if you get to hold on to some of the resources you’ve gathered when you start again.

Although Deadly Days is a game about survival, it’s an action game first and foremost. There UI can feel cluttered at first – making you think there’s a major survival/crafting element here – but you’ll soon gather into a rhythm where you’ll spend little time in menus. The cartoon-like visual style and lighthearted music also makes sure the game remains fun and doesn’t go in the usual gloomy direction that zombie games do. Definitely recommended if you like zombies and indie games.

OCO is out on Steam

Sometimes the simplest concepts are the most fun, and SPECTRUM48’s latest games OCO proves that point. It’s a visually minimalist-yet-creative platformer that’s currently only out on Steam and features one-button controls. If you’re thinking ‘endless runner’, you’re probably not picturing how OCO plays.

Most levels in OCO are circular in shape, with a layout that lets you jump towards the exit while the level rotates itself and you automatically move around it. Your jumps need to be precise though, even if you’re only looking to get to the exit – climbing the leaderboards is something else completely. The game features 180 levels, with 1000s more that were crafted by the community.

With its accessible yet super challenging gameplay and short levels, this is a one of those “one more try” games, and at a super cheap price it’s hard to pass up when you consider the wealth of content you get and have access to.

Cardaclysm heads to the Switch

Cardaclysm, the card battler/RPG hybrid from Elder Games and Headup, launched into early access last year and then into its 1.0 version back in February of this year. All of that was on PC though, with the game only available on Steam. This week, the game is also available on the Nintendo Switch, and its card-based mechanics are a great fit for a touch screen interface.

With five factions, the game has an RPG element that sees you battling with five bosses over the course of a single player campaign across a variety of biomes. Another RPG aspect is the ability to equip artifacts to your character, but the core of the game are the cards – there are over 240 of them, and Cardaclysm is definitely a looker in the card battler department with its 3D animated cards. And, unlike others in the genre, this one doesn’t feature any microtransactions where you get lured into buying more cards in order to be successful.

Woodsy Studio’s visual novel Crimson Spires launched on Steam back in 2020, but has now received a console port thanks to Eastasiasoft. Available for all major consoles, including next gen, we took a look at the PlayStation version.

Where many visual novels go in the direction of anime and/or otome with its visuals and story, Crimson Spires goes in a different direction. It takes place in a mining town that you’re passing through as an FBI agent in search of a serial killer, when a supernatural event suddenly transforms the town into a inescapable fortress protected by deadly spires.

Half a year later, you’re the only form of law enforcement left, and the only link to the outside world is a train that drops off supplies every week – no one is allowed to leave, and those who try to make a break for it perish in the process. An investigation into two missing teens then sets you on the trail of a mysterious vampire cult, exposing some of the dark secrets of the town.

A cast of different characters offers you a variety of choices to help you shape your own story, with the lure of the vampires always there as a story element. All of the major characters have been well defined, with distinct personalities – both in writing and visually. It makes for an excellent mystery tale, which besides its visual novel elements also minor adventure gaming elements where you explore environments. This one’s mostly for visual novel fans though, as the adventure game elements are a tad undercooked – especially compared to the quality of the writing.