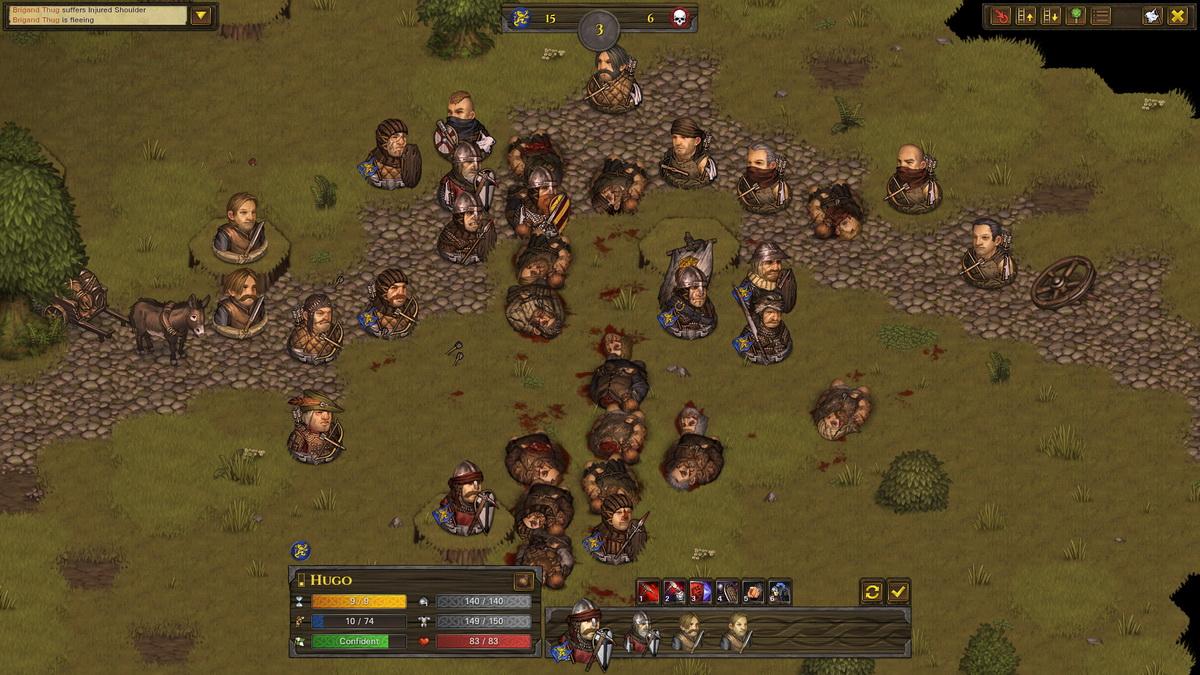 Battle Brothers, Death’s Gambit – Afterlife and Memories of East Coast were all ported to consoles in recent weeks – time for a closer look.

It’s been almost five years since Battle Brothers from Overhype Studios first launched on Steam, and its visual style that resembled a board game immediately stood out. It’s been expanded upon with several post-launch DLC releases since then, and now a complete edition is available for consoles. You can also start off with just the base game, and for us this was our first time of actually going hands on with it.

In a single word, Battle Brothers is challenging. It’s a fantasy turn-based RPG where you control a band of mercenaries that you’re looking to grow into a powerful group of heroes, but loss will be more frequent than glory. That’s especially true at first, because in-game tutorials and hints are severely lacking. With almost five years of player testing and feedback we have to assume this is a conscious choice on the developer’s part, but it certainly doesn’t make Battle Brothers a welcoming title – which is surprising, because it gets pretty engaging if you stick with it. Having to go online to figure out what the various HUD elements do and would in-battle tactics work is going to scare players off, and I’ll admit I mostly did it because I wanted to have more to say about the game. 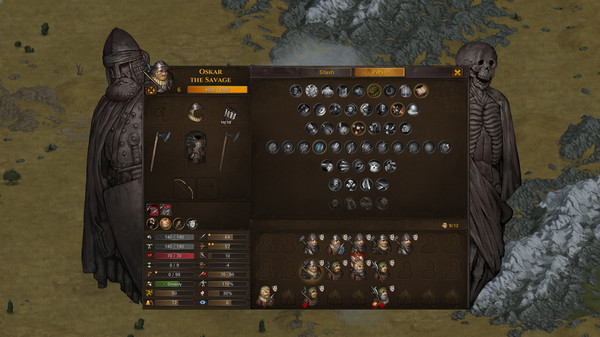 At the end, I was glad I stuck with it though – things eventually started to fall into place, I started to win battles based on tactical choices rather than dumb luck, and I saw my units grow over time – making a loss suddenly feel significant rather than a “I couldn’t help that anyway” kind of scenario, which it was like at first. That is also the moment where you start to appreciate the open nature of the game, especially when you have the DLC installed – which greatly expands both the diversity of the game map and the roster of characters. There are quests, towns and shops, and the world is held together by an interesting story as well – making it easy to sink many hours into the narrative.

Battle Brothers’ greatest strength is also its biggest problem – it’s a very involved kind of game. From a somewhat convoluted UI to the game mechanics and the need to learn through trial and error, there’s a steep learning curve to cover, but once you get past that there’s a wealth of gameplay to uncover with tons of options to let you tinker with your loadout so you can change the course of battle. Combine that with visuals that are somewhat basic but definitely have an identity of their own, and this is a game designed for players who enjoy sinking dozens of hours into turn-based RPG games that ultimately feel rewarding despite not being very welcoming to more casual players.

As a title, Death’s Gambit – Afterlife might look familiar, and not because of that recent Ghostbusters film. Death’s Gambit was (without the Afterlife part) released a few years ago, and even got a console version back then. Afterlife marked the release of a new and expanded version of the game on PC a few months ago though, and now that version is available for console owners as well. 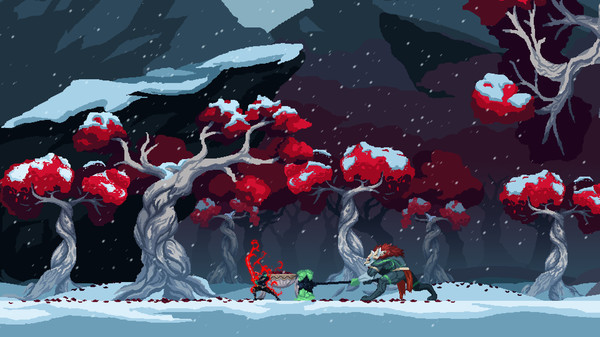 If you already own Death’s Gambit then Afterlife comes as a free update, but it’s not one of those regular patch releases – it comes with a ton of new content. Included are ten new levels that are home to five bosses, and you’ll have over thirty new weapons to fight with as well. It’s a more than worthwhile expansion to a solid Dark Souls-inspired action platformer from developer White Rabbit (published by Serenity Forge).

We’re happy to note that Death’s Gambit is also a Metroidvania, but that probably won’t keep you from thinking it’s part of an overly crowded genre of games – and you’d be right. It’s a very well made example though, with echoes of the PS2-era Castlevania games in its visual style and combat as well as game mechanics from the more recent roguelite era. With gorgeously made and well animated pixel art visuals, it also sits somewhere in between those classics from 20 years ago and today’s more detailed graphical styles.

It doesn’t shy away from being a dark fantasy tale though – one where you as protagonist Sorun are actually dead and have to sign a deal with death himself in order to keep going – at least until the next time you need him to resurrect you again, in order to fulfill his wishes. It’s an interesting enough premise, but for a narrative-driven experience you probably need to look elsewhere – Death’s Gambit can feel disjointed, and it’s the gameplay that drives you forward rather than the story.

Gameplay is a familiar experience of hitting a wall of all-too-powerful adversaries in one direction, only to power up by defeating others elsewhere and returning later. Exploration is a big part of that in Death’s Gambit as well, as you always have more freedom to go places than you’d normally expect in a Metroidvania – where you usually have a fairly decent idea of what the next best place to visit or try for is.

Luckily, traversal and combat are both great, so it’s never too much of a chore to try and find your way. If you get lost and a strong enemy strikes you down almost instantly, the price for failure isn’t that high either, as you don’t lose any of your in-game currency (shards) when you fall – and you can reclaim your lost health items on your next run as well, which you can start by spending those shards on upgrades. It makes for an addictive loop, and combined with the attractive visuals it’s a lot of fun to play through the campaign and new content – which will take about 12 hours to complete in total.

Eastasiasoft is continuing their string of ports with the release of Memories of East Coast, which is a visual novel that was first released on Steam a few months ago. It’s an interesting though somewhat flawed take on the genre, but unlike other visual novels this one won’t take more than an hour or two to complete – making it much easier to forgive its shortcomings.

Memories of Coast is about a policeman named Sam, who travels back to the East Coast that he used to visit as a child, only to be confronted with tragic and suppressed memories of his past. When you meet a girl who has her own share of emotional baggage, the scene is set for a story that explores how to confront and deal with elements like grief and guilt, which makes for interesting ingredients to a short story like this.

But while the story is intriguing enough, the delivery isn’t as good as it should have been, with writing that often doesn’t flow like it should as it was likely written by a non-native speaker. It’s not bad, just not good enough for it to not be noticeable, and it hurts the narrative. Sometimes a verb’s tense won’t be correct, or things that should be singular are plural – that sort of thing. You don’t lose track of what’s going on, but you do stop and re-read what you just read. 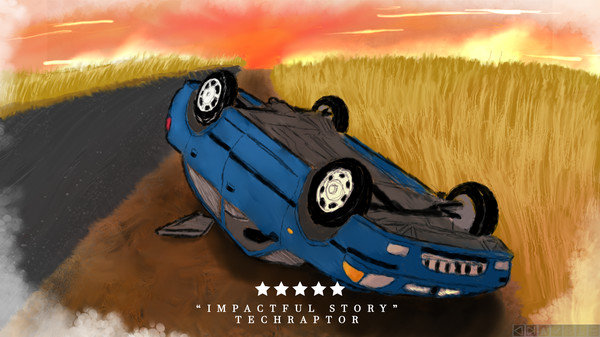 What’s nice about Memories of East Coast, however, is that it doesn’t use character art – a big change from the norm in visual novel, which usually only exclusive use character art to tell their story, and rarely show any scenery. Memories of East Coast presents itself almost as a series of paintings, taking you to these remote locations while following a trail of introspection. It certainly feels a bit ‘low budget’ as well, but in the atmosphere-building sense it definitely works. A flawed visual novel then, but its short run time and easy trophies will more than make up for that for a lot of people.