Perhaps more of an interactive movie than a pure videogame experience, Until Dawn delivers a truly unique horror/slasher experience and is a must have to fans of the films that inspired it.

Originally scheduled to be a PS3 game with full Playstation Move support, Until Dawn resurfaced after the PS4’s introduction as one of Sony’s exclusives for their brand new console Move support was no longer included, and the PS3 version went missing without a trace. Perhaps a nice but (for PS3 owners) unwanted segue to the game’s plot, which starts out with a pair of twin girls who vanish during a trip to a remote cabin with their friends. One year later, the remaining friends return to that very same location, only to find out that now their lives are in danger when a mysterious presence starts picking them off one by one.

Sound familiar? Until Dawn is an homage to the slasher movies many of us know and love. Often formulaic, full of jump scares, and riddled with deaths that could certainly have been avoided had “character X” not done something so stupid as to leave her friend alone, turn the light off, etc. Movies like this often have you on the edge of your seat because of the tension that arises from sudden decisions by cast members that evoke an immediate sense of worry and dread – making you wish you could tell them to go the other way instead.

Well, that is exactly what Until Dawn is all about. Though you’re not a movie director, you can most certainly affect the outcome of this particular slasher story – and your decisions can end up having everyone killed, or make sure everyone walks away alive and well. And, of course, everything in between. A lot of this will depend on how you deal with the various “split second decision moments” and quick time events in the game. A “split second decision moment” can be a choice to either trust a character or not, or to favor one companion over another – whereas quick time events are, like you’d expect, a matter of pressing the right button at the right time. Strip away these two things and the core gameplay in Until Dawn won’t win you over. It’s a matter of walking around and finding the items or triggers that will move the story along to the next intersection, and it’s the suspense and knowing that every choice has a major impact that keeps you fully immersed. 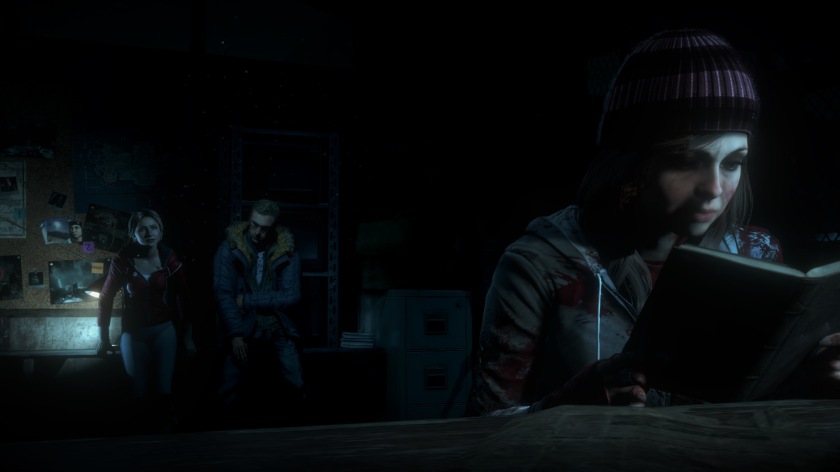 Of course, there is a danger that if you spend too long aimlessly wandering around, it will break the flow of the game – like a long sequence without suspense would do in a slasher movie. The game acknowledges this by gently pushing you in the right direction and providing audio and musical ways to enhance the suspense though, so if the story slows down too much it would almost have to be an intentional move on behalf of the player. What also helps in driving the story forward are the excellent performances by the Hollywood talent involved, including the likes of Hayden Panettiere and Peter Stormare (always a welcome face in a horror movie). The motion capturing is similar to that seen in previous titles like Beyond: Two Souls, but in a very different setting.

So because this game is set up to play as a slasher movie (don’t worry, it’s way longer than their usual 90 minute runtime), some concern regarding its lasting appeal popped up when discussing this game. This is something that heavily plagued the “interactive movies” of the nineties, where only one direction and outcome was possible. Luckily, the amount of story branches here is infinitely bigger – though they’re still variations on a theme, and repeats of large portions are bound to happen on your third or fourth playthrough. Having said that, there are very few single player games out there that warrant that many replays. The game doesn’t support any multiplayer, but we could see it being a lot of fun to play through this with a few friends over a weekend or so – movie night, but with a playstation controller.

One thought on “Until Dawn review (PS4)”