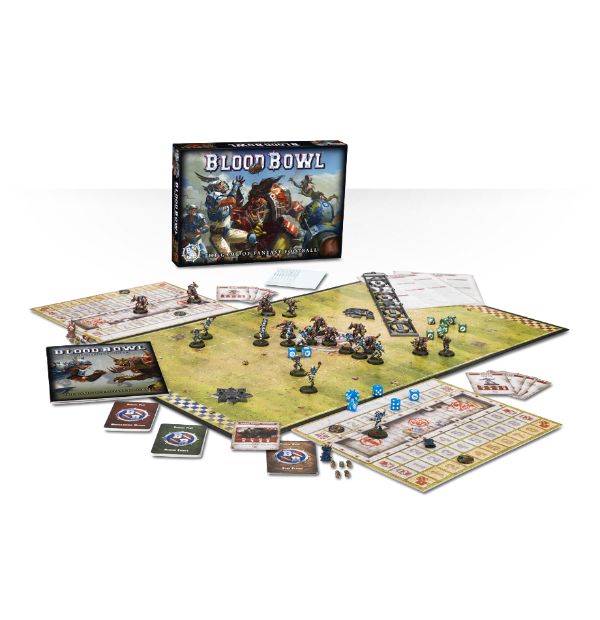 So what do a bunch of game reviewers do when they get together and hang out without the aid of a pc or console? They play board games – and recently we’ve been having a lot of fun playing the latest board game version of Blood Bowl by Games Workshop.

Of course Blood Bowl was always going to be an easy choice for our little group – we’ve been familiar with the videogame adaptations of the game for years now, and did a review of the sequel when it came out not too long ago. Being of the digital generation, however, we had never played the game that started the entire franchise – the board game version that is. Those among us who call themselves Blood Bowl veterans really only know their way around the videogames, so this was our chance to take them on on a different turf.

The Blood Bowl board game has actually been around a lot longer than most videogamers would think, dating back to 1986. Since then, there have been a couple of re-releases of the game, but it has been a while since the fourth edition of the game came out in 2002. The version we played is the most recent (fifth) edition, which came out near the end of last year. Aside from updated player characters/miniatures, a big new thing is the fact that you have access to two different playing fields now – more or less giving you a home team kind of feeling depending on the field and team you choose.

The box comes with two teams to play with/coach, the humans and the orcs. They are of course the biggest and most familiar races, but additional Blood Bowl teams are/will be available for purchase as well – it’s sort of the board equivalent of DLC. As with the videogames, different teams have different strengths and can thus employ different strategies – adapting to the team they’re playing against as well. In that sense, investing in more teams becomes very interesting once you start playing regularly – but the game is perfectly playable and complete out of the box, and it takes a while to get to grips with the rules and start devising tactics of your own.

Those remotely familiar with Games Workshop titles might know about the miniatures and how players enjoy painting them – even putting them up for display or selling them. Our miniatures are still unpainted, but the detail work on them is incredible and definitely allows for some creativity if you have the skills to paint small surfaces like this. Unpainted, one teams is colored (an Army Men-like) green whereas the other team is blue. Each time has twelve players, with four classes per team – for instance, the human team has blitzers, throwers, catchers and linemen. These all come with their own attributes, as outlined in the lengthy rulebook that’s included but features a lot of familiar stuff for those familiar with the videogame versions. Obviously a board game can’t offer you an interactive tutorial full of audiovisual support, but the rulebook does a great job at explaining the rules even to novices who don’t have any Blood Bowl experience. And to help in terms of showing you the ropes, there are a few drills you can play to familiarize yourself with most of the basic rules. 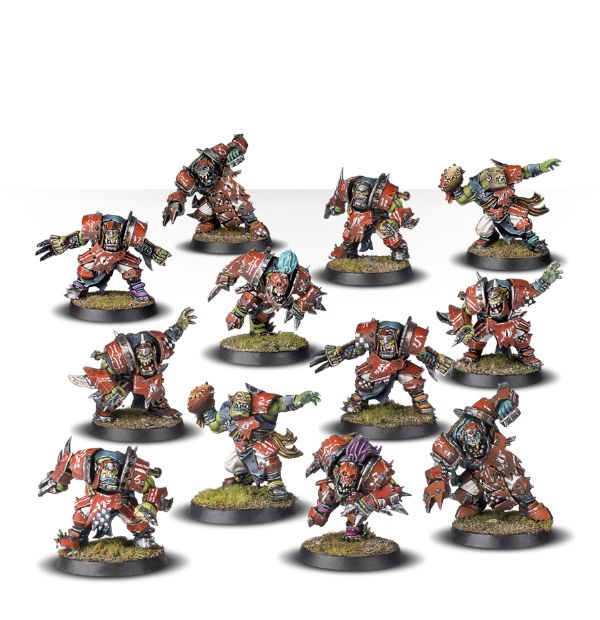 After you become familiar with the basic rules, there are some extra rules as well – which add to the complexity of what’s possible. If you’re a complete novice, I would recommend playing a game with just the basic rules first before moving onto the extra rules – and eventually some extremely tactical play. Players can get injured or even die, you can get re-rolls for when you’re not happy with the luck that the dice are bringing you. Once special cards/abilities are thrown into the mix, your options multiply. In your first game you might try to stick with one tactic hoping it will work, but you’ll soon learn more and more about possible outcomes and you’ll start planning for them. This is the brilliance of Blood Bowl (videogame or board game) and has kept the game popular for so long.

Nearly everything that’s in the videogame can also be found in the box – filling up your playing area nicely with things like dugouts and cards. A small amount of assembly is required the first time you play, but setup is a breeze after that. One of my personal favorite things in the board game were the custom dice that are included, which graphically illustrate the outcome of in-game scenarios much like the animations do in the digital version. Being familiar with both versions of the game really helped in visualizing everything and making the board game feel alive.

As hinted at before, the game does have a bit of a learning curve, and it definitely seems to help if you’re familiar with the videogames. Pair two players of the same skill level together though, and it’s instantly great – which I suppose also applies when a more experienced player is willing to hold back and teach a newbie the ropes (unlike some people I know). Perhaps best of all is the social interaction that comes with the board game version of the game. A few of our reviewers have never been interested in turn-based videogames, but really enjoyed the interactive experience of playing a game of Blood Bowl together. Often, it would not just be about winning – it would be about a bone-crushing defeat and about humiliating the other player. Only to have another go again and start up another two to three hour game. I think it was about 4am the first time we all got together and played…. and that’s a rare and good sign. If you enjoy turn-based strategy games in a digital format then you’ll definitely enjoy Blood Bowl, and if you don’t then it might just sway you – it’s accessible enough and playing together is always more fun than playing solo.