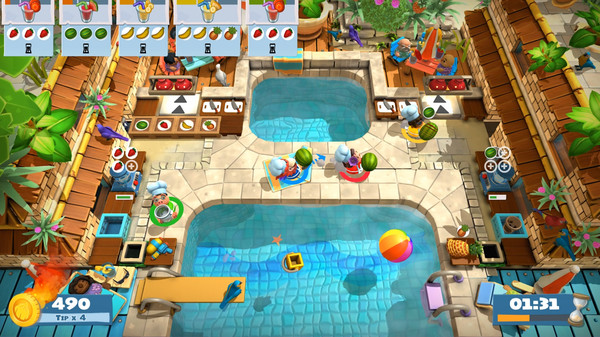 Team17’s sequel to Overcooked provided a hefty new helping of local (and online) multiplayer fun when it came out in August. We’re still playing it regularly, but they just released a new side dish in the shape of DLC content entitled Surf ‘n Turf.

Making the summer last a little longer, Surf ‘n Turf places you in several beach resort kitchens, which ties into the recipes and gameplay that are new to the expansion. Refreshing smoothies are now on the menu, and you’ll also be grilling up skewers for your clientele. The gameplay itself it instantly familiar, but the DLC does come with extra challenges that are unique to the new content so I wouldn’t advise jumping in until after you’re comfortable with the core mechanics of the game.

In Surf ‘n Turf, the biggest new addition to the gameplay is the water gun. You can use it to put out fires, clear dishes creatively, or you can have a little fun with them at the expense of some of the other players. It may not appear super professional, but it all fits with the theme of summer fun. When you get an order in for some skewers, you also need to stoke up the fire using bellows, adding another twist to the cooking action. 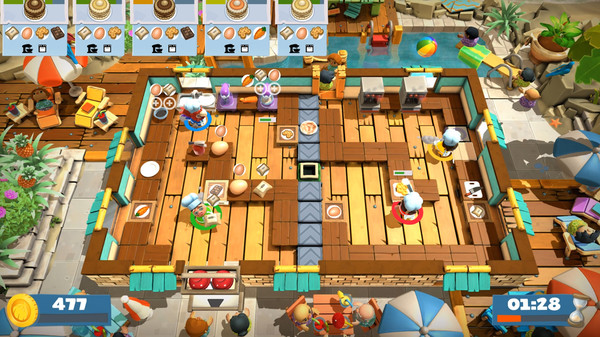 The bulk of the expansion consists of 12 story levels, which each have their own challenges in terms of level design – though nothing that’s radically different from the base game (or the first game, for that matter). There are also two versus levels included, in case cooperation isn’t your thing and you feel like making use of the water gun a little more creatively.

Despite the new theme and fun setting, Overcooked 2’s Surf ‘n Turf expansion is essentially more of the same and relatively low on game-changing content. Is that a bad thing though? Not if you’re still enjoying the original game, which we reviewed here. 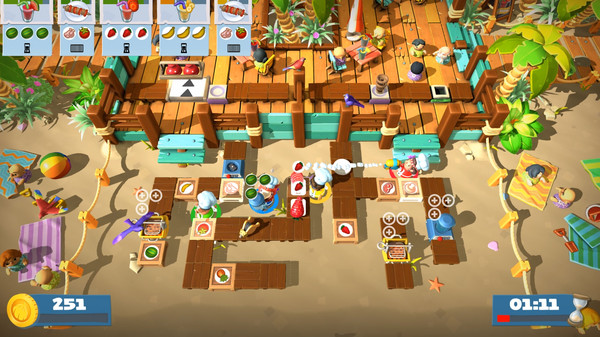