When the Ragnarok expansion for Titan Quest was released, it mostly stood out because it was a new chapter about ten years after the release of the original game. THQ Nordic’s done it again, with another expansion for the classic action RPG. What does the Atlantis DLC bring?

Not surprisingly, the new DLC deals with the lost city of Atlantis, the search for which is the basis for the mini-campaign that makes up the bulk of the new content. It’s not a standalone tale, but rather a new act that you can start after completing the third act of the base game. The DLC description makes Atlantis sound like an epic tale, and while it certainly is in terms of narrative scope, it’s rather short in gameplay length – a playthrough of the new act will take you about four hours to complete.

From that perspective, the new content is relatively expensive, which is something to consider if you’re only in it for the new storyline. There’s more on offer though, like the ability to play with up to five other players at the same time, a bunch of new loot, an endless mode and a wave-based mode. There are also a few subtle enhancements to the gameplay, including new skills and the ability to gamble away money in exchange for a chance at rare loot.

There are subtle new technical changes to the core Titan Quest engine as well. This enables Atlantis to feature a few new visual effects, but you’re still dealing with groundwork that was put in over ten years ago, which shows in the visual department and in a few slowdowns that I can’t possibly explain when I look at how far PC technology has evolved since the game first game out. 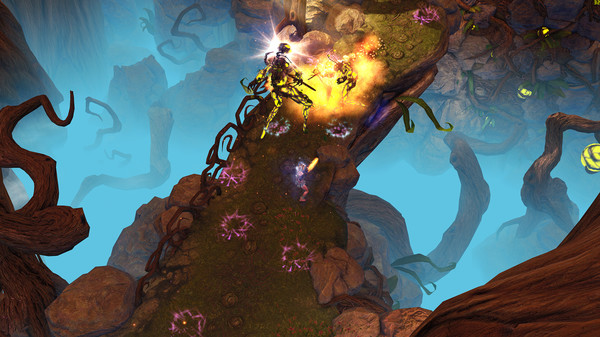 Luckily, these things are easily overlooked because Titan Quest is still a solid example of the genre and can still hold its own alongside very recent takes on it – including Pagan Online. In part, this is because Titan Quest (and the Atlantis DLC is no exception) makes great use of popular mythologies and delivers its story backed up by a great soundtrack as well – two things that age very well.

As with Ragnarok, if you were a fan of the original Titan Quest then you’ll feel right at home here with a well-designed throwback to a popular era for the action RPG genre. Maybe it’s wise to wait for a sale if you’re only interested in the campaign content though, since Atlantis is priced at almost the same price as the base game – and it’s a lot shorter.