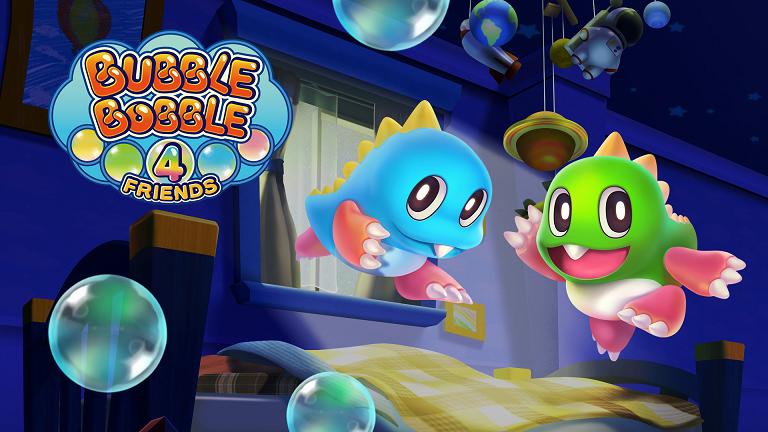 Bubble Bubble 4 Friends came out late last year in Europe, but the Nintendo Switch title only just launched in the US and it did so alongside a brand new plans for (free!) DLC. Time to check it out.

Having grown up in an age where videogame arcades were still a big thing and many games you played at home were actually conversions of arcade games, Bubble Bobble is a big name for me. We’ve seen many sequels and spin-offs over the years (including the popular Bust-a-Move games), but I still hold a soft spot for the original platformer that started it all back in 1986. With 100 levels to play and very catchy music, it’s something I instantly recognize the second I lay eyes on it.

Taito’s new Bubble Bobble 4 Friends plays to this sentiment perfectly, with colorful cartoon-like visuals that look similar enough to the original (albeit with far better animations) and a musical score that playfully borrows the upbeat melodies of the original arcade classic. And speaking of which – that particular version is included as a free little extra mode for an added bit of nostalgia.

This new version’s gameplay doesn’t deviate much from the original either – with a large number of small/remixed stages filled with ghosts and monsters to trap inside your bubbles, which you subsequently burst by jumping into them, taking care of the enemy threat in the process. You can also use bubbles to float or leap to other places in the level, making traversal easier.

One big change, however, is the inclusion of boss fights – something that wasn’t in the original game. These are larger enemies that you can’t simply trap inside a bubble, but must be pelted with bubbles until you wear them down, evading their attacks as you try to do so. Another twist comes from the fact that beating bosses also grants you access to additional (secondary) attacks in the regular stages as well. These are often inspired by the special bubbles the original game had as well, like the ability to launch a lightning strike at your enemies.

When you look at the game’s title, it’s not surprising that Bubble Bobble 4 Friends supports cooperative play for up to four players at once. Things get hectic and fun this way, but the levels themselves don’t support the size and number of monsters to make the experience last long enough in this mode. I suppose that’s where part of the criticism towards the game during its November launch window came from as well, which mostly focused on a lack of content (although the original arcade game that’s included adds 100 levels to the package!).

Taito’s currently in the process of addressing this though, with a host of post-release DLC that’s in the works and will be released for free to owners of the game over the next few weeks and months. Included will be new levels, as well as the return of Baron von Blubba as a boss character.

In my opinion Bubble Bobble 4 Friends works best as a traditional 1 to 2 player experience, and if you’re a fan of the original game like me then this is a perfect way to relive those days in a game that has the audiovisual polish that our children expect while retaining the looks and sounds of a beloved classic. Well worth it for Bubble Bobble fans, and only getting better in the months to come.