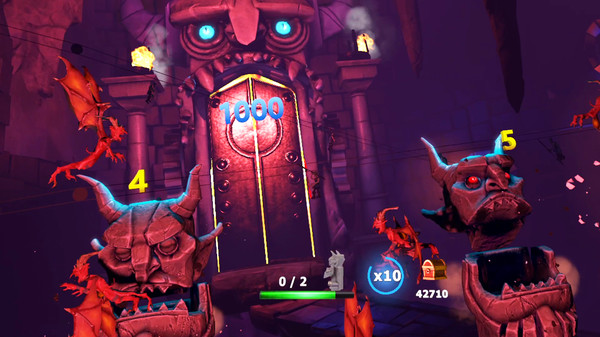 A brand new multi-platform VR action game from KnockTwice Games, Good Goliath is out now for Playstation VR as well as PC-based headsets. We tested the game on a Playstation 4 Pro.

In Good Goliath you play, perhaps not surprisingly, a giant. You don’t mean anyone any harm, but somehow everyone in the fairytale kingdom has it in for you. From humans to witches and the undead, they’re all hoping to take you down and it’s your job to defend yourself. Good Goliath is a wave-based tower defense-inspired game that relies heavily on motion controls rather than the strategic placement of units.

Members of the development team behind the game previously worked at PlayStation and Disney, so it’s no surprise that the end result here features bright and cartoon-like visuals that look like they were plucked from an animated fairytale. The game is meant to be a fun and frivolous take on VR gaming, and the graphics reinforce this notion. 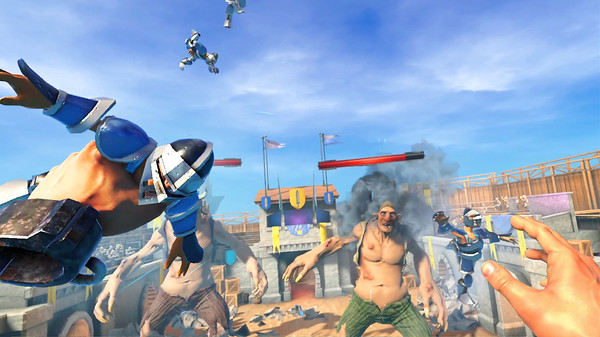 As this fairytale world’s citizen come at you, you stand your ground by throwing their projectile weapons (and themselves) back at them, causing mayhem in the shape of exploding barrels, vikings that get hurled across the scene and even sharks that become airborne. And while you (as a giant) remain stationary during gameplay, the backdrops against which you play are quite varied. There are twelve in total, ranging from picturesque villages to a seaside filled with pirates. You’ll also encounter different enemies and weapons in each scene, which keeps things from getting too repetitive.

The main mechanics remain the same throughout each level though – you can punch away incoming dangers, dodge projectiles, or catch them in mid-air and throw them back – the latter being great fun in how it makes you feel like a very powerful adversary for these tiny attackers. What you catch makes a difference in how much damage you deal when you throw it, as simple objects deal less damage than when you grab hold of a barrel full of TNT and throw it at a group of enemies. 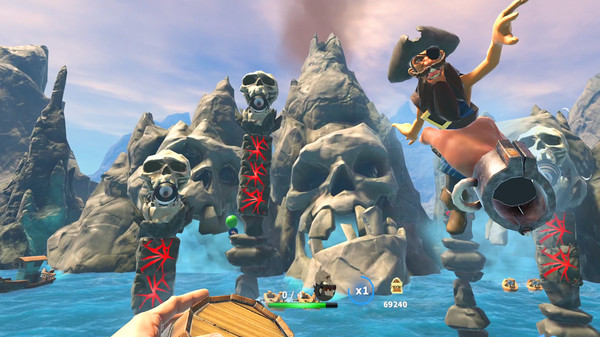 Good Goliath relies heavily on motion controls, and thus requires you to use a pair of Move controllers. If you’ve played similar games that also rely on a throwing mechanic (Carnival Games VR is a good example) then you should have a pleasant learning curve in this one as well – otherwise the motion and timing of your throws could take some getting used to.

All in all, Good Goliath is a fun and not-too-serious take on the tower defense genre that is meant as diversion in a game that uses proven VR and motion-controlled mechanics to convey a sense of scale that only VR can deliver effectively. Combined with entertaining gameplay mechanics and a charming visual style, this is a bit of fun entertainment even though it’s ultimately more solid than it is remarkable.