As we get closer to the end of this console era, we’re greeted with another remake of a game that was big in previous generations – Tony Hawk’s Pro Skater 1+2, which bundles the first two games in the franchise in a new version for the PlayStation 4, Xbox One and PC. Here’s our review.

While a lot of the earlier remakes during this console generation hail back to the PS3 and PS2 era, we’ve more recently seen the likes of Spyro and Crash Bandicoot make a return modeled after their PS1 exploits. Tony Hawk’s Pro Skater was another one of those games that made headlines during that time, alongside releases for systems like the Nintendo 64 and even the Dreamcast. The first two games were released back in 1999 and 2000, and they arguably peaked not long after that with the release of Pro Skater 4. The now-defunct studio Neversoft was handling development duties at the time, but Vicarious Visions was already involved – handling the mobile and handheld ports, mainly.

That’s worth pointing out, because the studio was certainly no stranger to the franchise when they were chosen as the main developer for this remake. It clearly shows that they know what makes a game like this “work”, with a release that ticks all the boxes for what fans want in a game of this type.

For example, you might remember that Tony Hawk’s Pro Skater HD was previously released in the PS3/Xbox 360 era. Besides offering higher resolution visuals, it wasn’t an improvement over what gamers knew and loved – stripping the game of features rather than adding to it. Tony Hawk’s Pro Skater 1+2 doesn’t fall into that trap, and blending the first two original games together makes it a very content-rich experience in the process.

This is showcased well in the game’s career mode, which feels like a “greatest hits” tour through the venues of the original games, but if you don’t want to play through a campaign and want to play local multiplayer instead then Vicarious Visions has you covered as well – split screen skateboarding makes a comeback here, although it’s capped at just two players playing together at a time even though it would have been a blast to play this with four people at once. The performance seems to suffer a bit in split screen though, so I could see this being a technical limitation.

Most importantly, however, the skateboarding mechanics are rock solid, allowing you to smoothly transition between combos by giving you access to all of the classic Tony Hawk abilities at once. There’s a bit of a learning curve for newcomers because of this, but old time fans will certainly feel like a fish in the water right away. 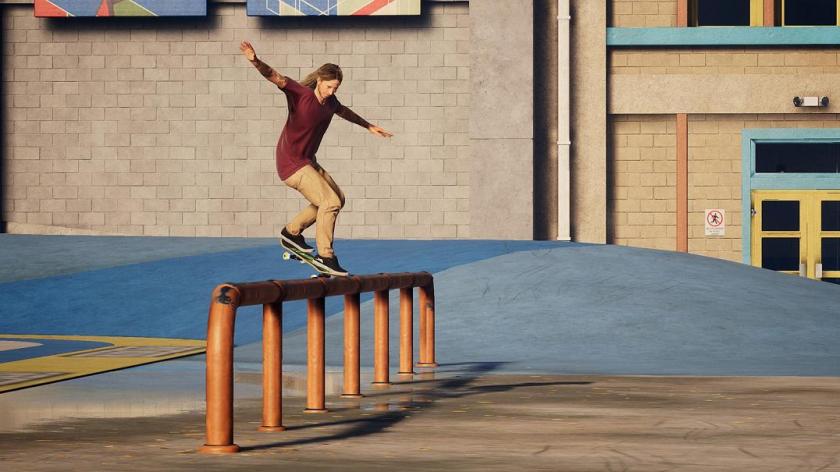 Of course you can free skate through the game’s many stages, but you can also chase objectives – many of which return from the original games. Expect to collect letters (SKATE) and pick up other collectibles as you complete objectives, where the key to completing them isn’t too hard if you remember the original games. With nine stages from the first game and eight more from the second one there is plenty to explore and (re)discover, but if you’re craving for more then there’s an additional one to unlock and there’s a track editor included as well (which features other people’s creations already). And although this is in no way confirmed, I wouldn’t be surprised if we saw a Tony Hawk 3+4 in the not too distance future as well – bringing the entire foundation of a skateboarding franchise to a new generation.

Audiovisually, the original Tony Hawk games were memorable not only for the smooth 3D visuals, but also for their soundtracks. A large selection of the original tunes were re-licensed for this remake, and they’re being joined by a few others for a soundtrack that features over 50 different songs – my favorite of which is Can I Kick It by A Tribe Called Quest. But while your level of appreciation for the soundtrack is a matter of subjective taste, the visuals are undeniably the best they’ve ever been for the franchise. What’s nice from a nostalgic point of view there is that Vicarious Visions has kept the look and feel of the original games intact while doing so as well, making this a wonderful visual blend of the old charm and the horsepower of present day consoles.

If you fondly remember the Tony Hawk games in their heyday, this is a must-buy – and it certainly helps that it’s being released at a mid-price budget too – further fueling my belief that we’ll see a 3+4 release and maybe even a collection that bundles them. For now, I’m just happy to reintroduce myself to a series I thoroughly enjoyed back in the day, and which has stood the test of time well.