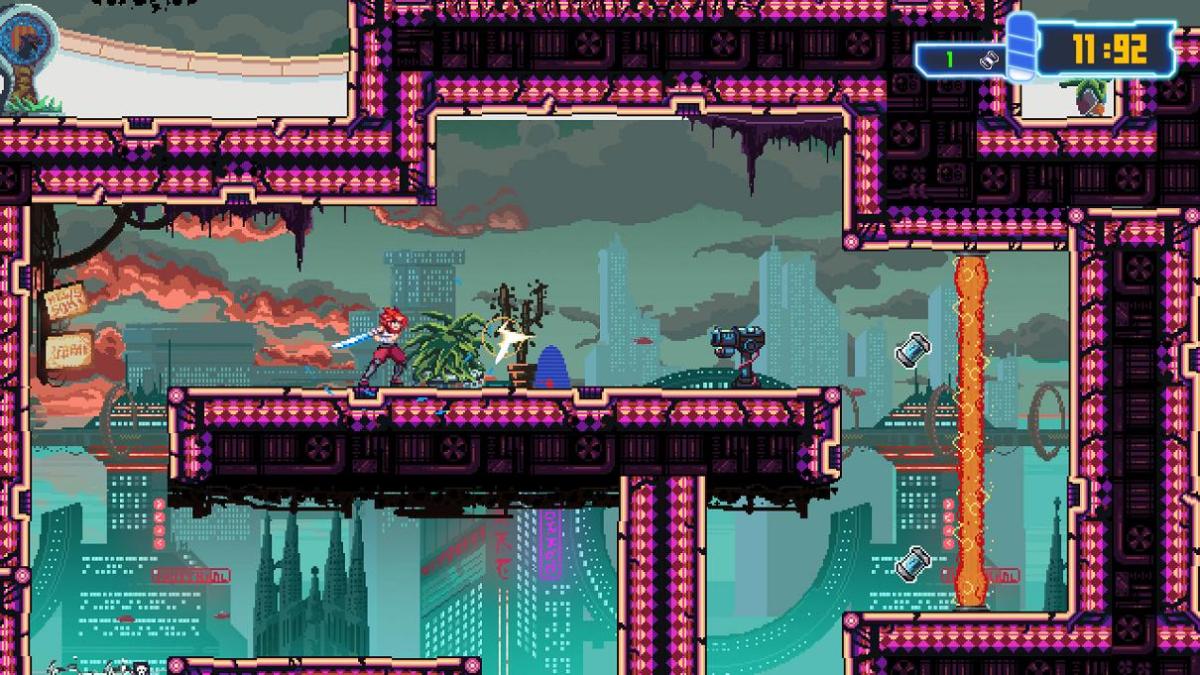 As we head into the weekend, we wanted to share three more indie titles with you. We’re looking at Aeon Drive, The Eternal Cylinder and Away – The Survival Series today – three very different games that are all intriguing in their own right.

Published by Critical Reflex and developed by 2Awesome Studio, Aeon Drive has been a long time coming. We’ve covered it before as well, when we bumped into the game’s developers during last year’s Gamescom and did an interview with them. Now, it’s out for both PCs and consoles for us to see how their vision turned out.

There’s a thin narrative setup to Aeon Drive that involves space ranger Jackelyne crashing into New Barcelona, but it’s mostly just an excuse to have you running around as quickly as possible, collecting drive cores before they tear this Cyberpunk city to pieces. As a speedrunning game, it’s all it needs, as levels typically take 60 seconds or less. 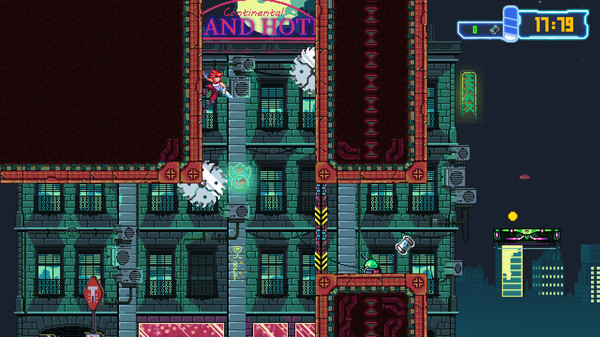 The counter actually starts at 30, but you can extend your time by picking up the aforementioned cores as well. When you get better, this is also the key to picking up collectibles that you otherwise wouldn’t have time for. That won’t happen right away though, as level layouts are always challenging and full of the usual traps and enemies. The latter can be killed with a sword, the first can be often we traversed with the use of a teleportation device you have.

Teleporting is the main gameplay mechanic in Aeon Drive, and it gives the game an identity beyond what you get in other challenging platform games – this isn’t cyberpunk Meat Boy, it’s its own thing even though you’re doing plenty of wall-jumping. Teleporting is tricky to get right (in terms of timing), but getting it right always feels rewarding. 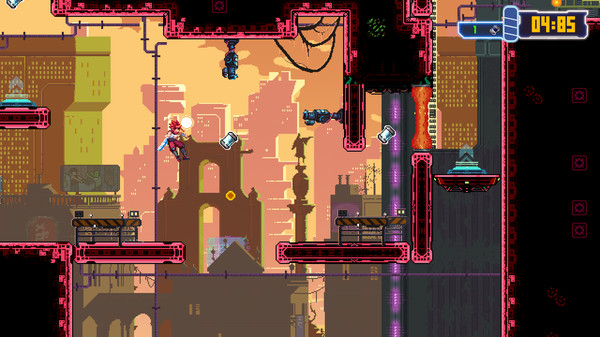 Once you complete a level, teleporting is also the way to go if you want to try and do it faster, teleporting in all directions even in spaces where you don’t strictly need to do it – but where you CAN just to get a faster time. It’s addictive, partly because leaderboards are competitive and improving your ranking always feels within your grasp.

With a great pixel art aesthetic and rock solid gameplay (which scales to get more difficult as you progress), Aeon Drive is an easy recommendation for fans of the speedrunning/challenging platformer genre. The wait was worth it.

The Eternal Cylinder from ACE Team and Good Shepherd Entertainment has one of those setups that could very well be the setup for an epic and mystery-filled sci-fi movie. Taking place on an alien planet, it’s all about exotic flora and fauna – including the cute Trebhums that you control. But at the same time, there’s a mysterious and ominous cylinder that rolls along the surface and crushes everything it touches. 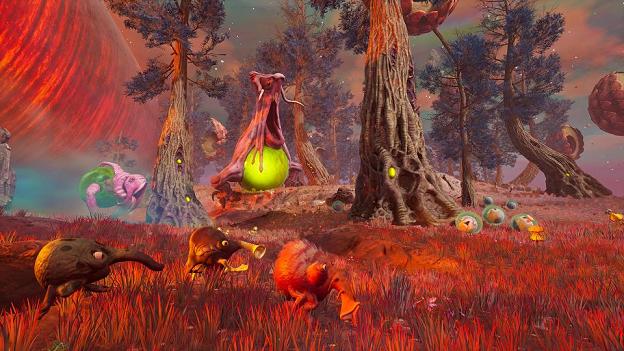 It certainly it a highly original premise, and having a danger that you feel absolutely powerless against is a strong driving force. Why is there a metal cylinder on the horizon? Why does it do what it does, and what choice do we have now? The narrative possibilities are endless, even if a lot of them exist only in the player’s head.

Controlling the Trebhum, your primary concern is to escape the certain doom that the cylinder represents. Your cute little blobby creatures can walk around, jump and roll to do this, but you can also consume natural resources to help you evolve. Individual creatures can gain specific abilities this way, and they can be extremely handy in navigating the planet’s dangers or opening up new pathways.

Survival’s also a case of staying nourished, but mostly you’re just looking to mutate so you can withstand the elements – swim faster, get through toxic areas, things like that. But because outrunning a cylinder can’t stay fun forever, you also get breathers when you reach towers that hold the cylinder at bay – at least for a while. During that time, you can explore, grow your party of Trebhums and/or evolve them – but step beyond the misty veil and the cylinder will start moving again. 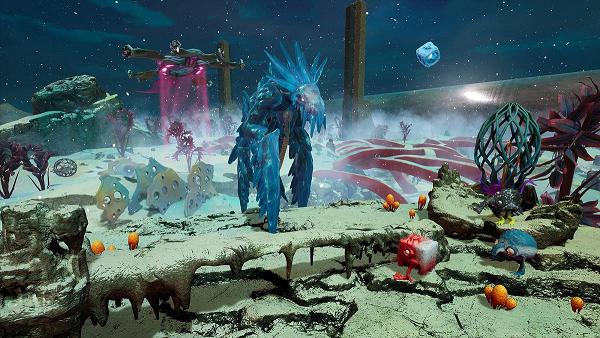 Throughout all of that, however, The Eternal Cylinder never becomes consistent – in a good way. There’s always something to throw you off, an enemy you didn’t expect or a danger in a shape that feels outlandish even in an world as alien as this one. Look past its simple premise of “giant cylinder – must escape!” and there’s a ton of creativity here, and it’s a joy to discover it even though it may cost you the lives of a few lovely Trebhum.

In this wholly original world with a highly original cast (which only briefly reminded me of Spore), it’s the excellent narration of everything that really makes it feel like an adventure. While the audiovisual delivery speaks for itself, the narrative places everything in perspective and makes you want to push on even more – all in order to get your Trebhum to safety. A must-play if you like games that are different from the norm. Or very different.

Away – The Survival Series

Videogames that blend nature documentaries with traditional gameplay aren’t new (as Beyond Blue demonstrated), but the trailers for Away: The Survival Series captured us with their novel approach to the concept. It’s set in a world where humankind has perished (yet – a narrator has been found!) and animal life has become sparse. You’re a young (possum-like) sugar glider, looking to survive in the disturbed ecosystem you’re in. 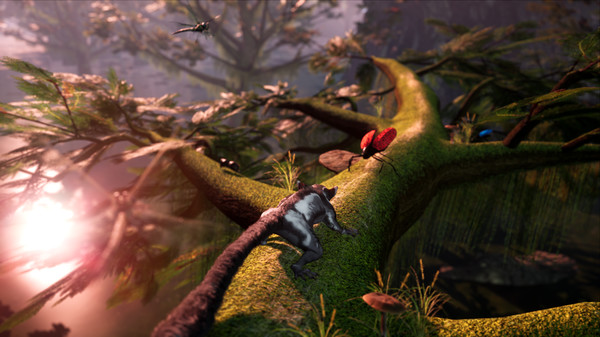 The aforementioned narrator is what gives the game its nature documentary vibe, and it’s been well written. The delivery can suffer from pacing issues though, because one voice sample will sometimes play over another unless you take a more leisurely approach – which of course is hard when you get caught up in the need to survive or are running away from threats.

Unfortunately this isn’t the only area in which Away could have used a bit more polish. While a sugar glider is a great choice for a protagonist because it’s an agile land creature that can climb very well and also glide through the air thanks to the membranes between its legs. An awkward camera makes your little critter hard to control though, which is also a shame because it makes it harder to enjoy the gorgeous nature around you as well. It’s great to see how well realized the animals are, but a more zoomed out perspective would have made sure that animal and nature moved together more harmoniously. 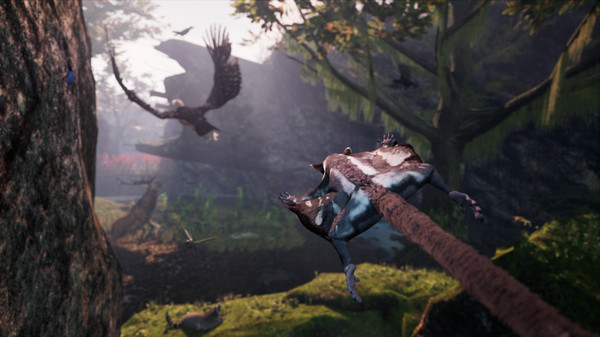 Luckily, since our initial playtest, a post-launch patch has dramatically improved the game in this regard, with much more camera control that lets you zoom out. We also didn’t run into any voiceover issues anymore, so we’re guessing this was also fixed. It’s a shame this wasn’t caught before the initial launch, as it makes a big difference – even if our main character still isn’t as agile as you’d imagine and combat’s pretty lackluster. We didn’t play through the entire (5 to 6 hour) story again post-patch, but we imagine it’s far more enjoyable now and plays much more like the exploration of life that it aims to be.

For some fun after the campaign concludes, you can also engage with the game’s exploration mode where you get to freely explore the gorgeous environments and can even switch to other animals. The developers have also added some more background information to this mode, making it feel a little like an interactive museum – which fits with the documentary-like approach for the story mode. It’s not a perfect game, but we were glad to see that day 1 issues were quickly addressed by the developer.