Three releases that caught our eye in November today, with Klang 2’s console versions, A Pretty Odd Bunny and the Ultimate Edition of Guild of Dungeoneering.

Commercially speaking, rhythm-based games really had their heyday in the PS3/Xbox 360 generation of consoles. Tracklists had extremely high profile titles on there, games shipped with entire instruments and sales were through the roof. Until it all went away, though singing and dancing games have stayed popular. Purely rhythm-based titles have increasingly become the domain of indie development, with smaller productions that really tap into creativity – and that’s not a bad thing. Cue Klang 2 from Tinimations, which released earlier for PC and is out now on consoles as well.

In Klang 2, you control an on-screen character rather than just having buttons to push – though the concept is still quite similar. When a note appears on screen, you’ll press the analogue stick towards it and hit X at the right moment to score points. Timing’s crucial, but as notes appear in different forms you also have to hold the analogue sticks and/or button for a while. What’s asked of you is always visually signposted, so nothing too troubling on that front. It is, however, challenging to master songs because the prompts are randomly generated – so if you rely on learning patterns you’re in for an uphill struggle here.

Klang 2 is a real multi-tasker of a game that asks a lot of your hand-eye coordination, controlling your character to make sure you’re in the right spot while also hitting the notes at the right time and holding them as long as you need to. All of that is to a soundtrack of mostly beat-heavy music from lesser known EDM artists – though we’re probably offending a few EDM fans there.

Compared to other rhythm-based games, Klang 2 definitely makes for a challenge with its somewhat randomly generated sequences – in part because they’re not always lined up to the music in ways you’d expect them to. You can still do just fine by observing the visual cues, but besides following a learned pattern the classic rhythm games were also fun because you could get into a “flow” of sorts. With Klang 2 that’s still possible, but you’ll also feel like you need to constantly be paying attention more. To make up for that, the game does offer a story mode, which is fun to relax with in between the challenging music-driven action. This one can be tough, but it’s addictive.

Besides developing games like Aeon Drive, 2Awesome Studio also acts as a publisher, and A Pretty Odd Bunny is a good example of that. Developed by AJ Ordaz Games, it launches on PlayStation, Xbox, Switch and PC this month, and it lives up to its name.

Our titular bunny doesn’t just hate carrots (he’s allergic), but has an interesting diet alternative: pig meat. It makes you less than beloved among pigs, but also an outcast among bunnies – but although that sounds serious it’s the premise for a story that’s filled with humor rather than drama, with lots of silly things delivered both visually and through narrative. The latter is mostly through little remarks from NPCs though, so don’t expect a cinematic storyline.

Instead, A Pretty Odd Bunny is a rather standard 2D platformer with a cartoony look and feel, but rather than rely on spikes and bullets your nemeses here are carrot traps and carrots that get hurled at you. There are (bacon) coins to collect in between all that which can help you unlock a few extra levels, but underneath its funny exterior this is a platformer not unlike something you’ve probably already played before. 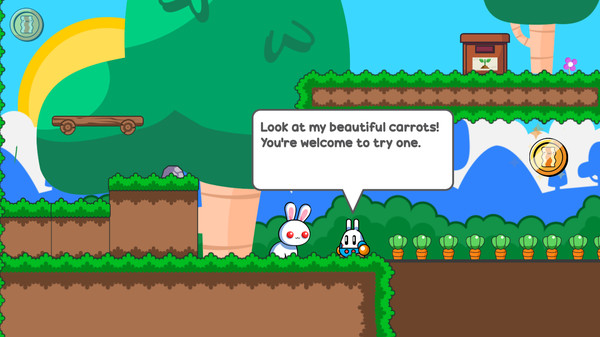 The game gradually introduces new elements in the shape of traps and enemies, though it starts recycling elements later on in the game as well. Easily forgiven because this is a budget release, but the game is also in need of a bit of extra polish – especially in regards to how the game is controlled. Your little bunny is responsive enough, but we ran into a fair amount of unfair deaths because of a hit detection system that feels a little off at times. It’s not a major issue and we still had fun playing the game because of its unique premise and humor, so if you like budget platformers this one’s worth a look.

Before the charming Cardpocalypse, Gambrinous released Guild of Dungeoneering back in 2015. It was well-received, especially when the iOS port launched a little bit later. Now, this indie dungeon crawler is back with an ultimate edition of the game, which for now is exclusive to Steam and offers a “fully rebuilt and remastered” experience.

The latter is a bit of a bold statement as Guild of Dungeoneering still looks and plays very much like the original game from 2015, but subtle tweaks here and there are proof that that’s also just my memory playing tricks on me. Animations have been improved, for instance, and the music and sound effects have been enriched as well. There’s also a host of additional content that wasn’t in the base game, including new monster and quests – and the previously released DLC addons are included too. Best of all – anyone who ever bought the game gets all of that for free.

The Ultimate Edition of Guild of Dungeoneering doesn’t change the core gameplay experience though, which still revolves around your dungeon making abilities as you design a dungeon for “chumps” to try and tackle, filled with loot, traps and enemies. You can visually customize these heroes (another new feature in the ultimate edition), but they’ll make their own decisions once sent into the dungeon – you can merely steer and support by using the cards dealt to you in a turn-based manner.

With your cards, you can affect the outcome of (boss) battles, shape the dungeon around you and grow your guild of heroes – which can also include supporting characters like a blacksmith. Of course, this being a card-based title with limited direct control, randomization and luck play a role in how things unfold – and the game can feel “grindy” as a result. Luckily, a charming presentation, from the art style to the writing, makes it feel like time well spent.