Electronic Super Joy 2, developed by Michael Todd and now brought to the Switch and PS4 by Hard Copy Games (their first digital release!), brings back the unique fusion of punishing platformer action and EDM music. Here’s our take on the PS4 version.

Not an entirely new release, Electronic Super Joy 2 was first launched on Steam last year. It also had a very interesting business model in that it was available for free for players, with a ‘gold edition’ available to purchase that provided a few bonus levels and a range of extras to help support the developers and musicians behind the game. While that model didn’t carry over to the PlayStation version, the new PS4 edition of the game includes all of that content by default – and it’s a tiny bit cheaper than the Gold edition on Steam.

The sequel doesn’t change much about the formula of Electronic Super Joy, which is a punishing platformer where you learn the layout and tricks in each level over the course of numerous attempts and failures, especially once you get through the first handful of them. Electronic Super Joy 2 also retains its “adult” themes, which roughly translates to hearing moans of ecstasy when you hit a checkpoint and the odd curse word here and there. If you don’t want any of that, or simply grow tired of it after a while, this can be turned off. 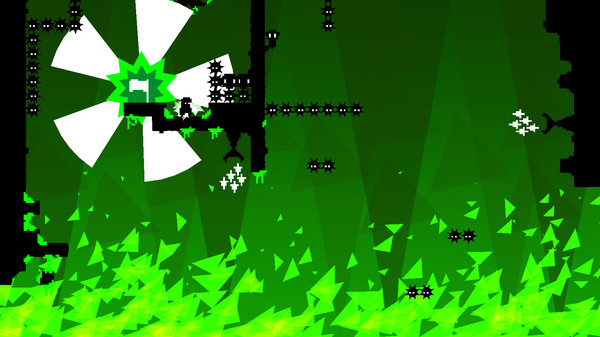 You do get a handful of new mechanics this time around though, and they add a breath of fresh air to what initially looks and feels like a set of additional levels for the first game since they’re so visually similar and (at first) play that way as well. Before too long, new moves are introduced, giving you access to super-dashes, multi-jumps and levels where the orientation of gravity changes. All of that is used to present you with new challenges and obstacles, and that’s not even accounting for the crazy bossfights that this game has. You’ll also encounter a retro 3d FPS sequence, though that particular section felt out of place for me.

Electronic Super Joy 2, like the first game, works best as a punishing platformer in the vein of Super Meat Boy – with online leaderboards and plenty of collectibles to entice you to come back to the game. Sure, there’s frustration in between the moments of “super joy” when everything clicks and you move smoothly through a level, but that’s what fans of the genre expect. If you’re in that group and happen to also enjoy electronic dance music, then this is a game you’ll want to check out. Its humor and ‘adult’ aspects might give it a more “niche” appeal than some of the games that inspired it though.