Now definitely on course for the “most prolific Vita publisher of the year” award, Ratalaika has launched its multiplatform arcade shooter FullBlast for Sony’s handheld, as well as the PS4, Xbox One and Switch.

The Vita has an impressively sized library, but it definitely isn’t overflowing with arcade-like shoot ’em ups. It got the excellent Sine Mora pretty early on and I enjoyed Dariusburst and Sky Force Anniversary as well, but that’s about all I can think of. A fan of the classic arcade shooter genre (and not so much the more modern bullet hell shooter), I was ready to welcome FullBlast with open arms.

Gameplay-wise, FullBlast is more like Sky Force Anniversary than those other titles, as it’s a vertically oriented shooter. It doesn’t use the full width of the screen either, which fits with the upright nature of classic arcade shooter but also sacrifices some of the Vita’s small screen and fills it with some static artwork.

FullBlast was originally a mobile title, and it shows in how accessible the gameplay is – and by that I mean that it’s way too easy to play and far too forgiving. I completed the game on my very first try, and was playing relatively casually while doing it too. Bumping the difficulty level to hard (and believe it or not, there’s also an “easy” mode below the default of “normal”) didn’t make much of a difference either, because now I knew what to expect and where to switch to my smart bombs.

As a shoot ’em up, FullBlast is extremely generic – both in a good way and a bad way. It’s immediately reminiscent of all those classic shooters I grew up loving (from 1941 to Ikaruga), but there’s also nothing unique about it. The game has excellent graphics though, so it’s a shame they got squeezed into 60 per cent of a Vita screen – to really enjoy them I would suggest using a Playstation TV unit or a PS4, since that version is part of a crossbuy deal. 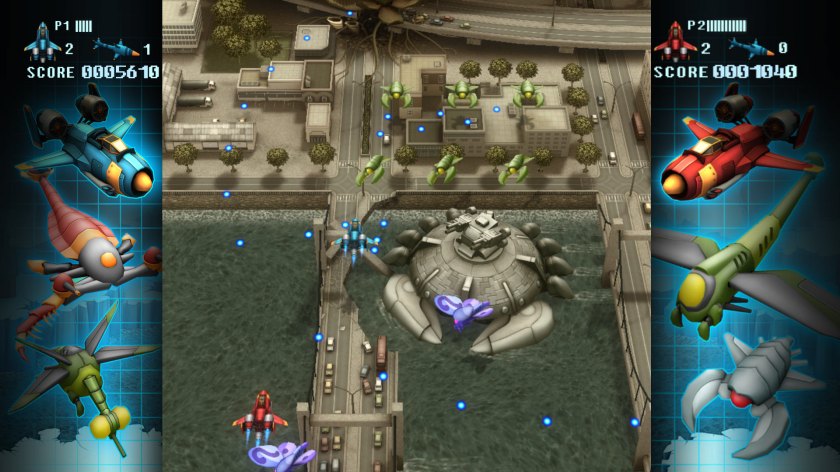 FullBlast’s twelve stages won’t take you more than about an hour to complete, which fits with most of Ratalaika’s Vita titles – with the exception of the recent (and excellent) Tetra’s Escape. It comes equipped with a platinum trophy as well, which I’m sure will hold plenty of appeal with those looking to boost their trophy score easily.

There’s not too much else to say about the game, except that it comes with Ratalaika’s usual budget price tag. If you enjoy arcade shooters then this is a gorgeous example on the Vita, but it’s held back by being low on content and severely lacking in the amount of challenge it offers.

One thought on “FullBlast review (Vita)”