Winking Entertainment has launched a sequel to Unearthing Mars, and for now it’s exclusive to Playstation VR. Unearthing Mars 2 – The Ancient War also features support for the Playstation Aim controller, which is always exciting.

Even though we’ve done many Playstation VR reviews over the past two years, we never covered Unearthing Mars. I did end up playing it later when I grabbed it during a sale, and although it had impressive visuals I never quite got into the flow of a fairly slow-paced adventure. The sequel sets out to rectify this with a more streamlined approach, this time emphasis the first game’s shooting sequences by bringing them front and center.

Story-wise, the game focuses on an ancient war and the civilization that has been caught up in the middle of it – told through the discovery of fragments that you uncover from Mars. It’s definitely interesting stuff for sci-fi fans, but the delivery of the story is held back a little by a so-so narrative, especially during dialogue sequences. Since some of these can go on for quite a while, it’s a shame that more polish wasn’t applied to the writing – even if it’s not the most important part of a shooter. 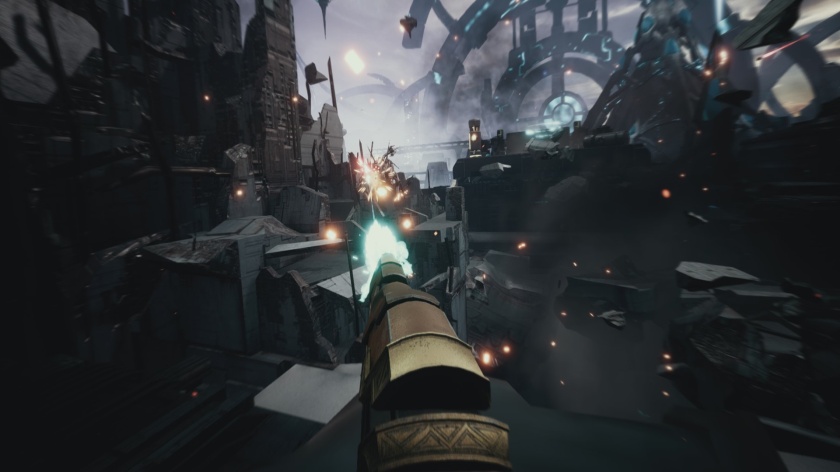 Having said that, Winking’s certainly applied plenty of polish to the game’s visuals – Unearthing Mars 2 is one of the better looking Playstation VR titles out at the moment, with beautiful outdoor sequences mixed with impressive looking non-player characters. With so many Playstation VR titles going with a more abstract look (often for technical reasons), it’s great to see another game that features more realistic looking visuals. It’s been well over a year since Farpoint and Mortal Blitz came to the PS4, so Unearthing Mars 2 was extremely welcome in that regard.

Unearthing Mars 2 has something else in common with Farpoint as well, and it’s the use of the Playstation Aim controller. Combined with the impressive visuals, this makes for an immersive first person shooting experience that’s a lot of fun to play, though it’s different from Farpoint in its approach. While Farpoint had you freely walking around the environment, Unearthing Mars 2 is an on-rails/wave shooter where you’re mostly stationary – apart from a few scenes where you switch between positions. I enjoy that kind of classic arcade approach quite a bit, but if you were hoping for something more like Doom VFR or Farpoint then you may walk away disappointed after playing this game.

The game’s weapons are as awesome as they are imbalanced/overpowered. The basic gameplay is solid, but you quickly unlock additional firepower that makes it too easy to do away with swarm after swarm of enemies (and there are no difficulty levels to select). This wouldn’t be a big issue in itself, but they’re too readily available and it doesn’t help that the game is already on the short side as well. Boss fights are a nice distraction and present a bit more of a challenge, and also showcase a little more diversity in gameplay design when compared to the wave/rail portion of the game.

The shooting action in Unearthing Mars 2 – The Ancient War isn’t as involved or intense as the Aim-supported Farpoint and Doom that came before. The campaign’s also shorter and less polished in the narrative sense, so it’s hard to recommend Unearthing Mars 2 over those two games. However, the arcade-inspired shooting is fun if you enjoy games like House of the Dead and Time Crisis, and the game looks gorgeous as well.