Wrapping up our coverage of this year’s Playlink titles is Chimparty, a monkey-fueled title inspired by the likes of Mario Party released exclusively for the Playstation 4.

At this point, I’d be surprised if you were reading this and didn’t know the drill – Chimparty’s Playlink-controlled and thus you’re required to install a dedicated app on your smartphone or tablet to control the game. It enables anyone with an Android/Apple device to play, and Chimparty’s one of the most family-friendly titles to grace the system so far. Chimparty doesn’t just look extremely silly and kid-friendly, it always plays that way. For better and for worse, really, but as a collection of minigames it is a bit hit and miss.

Let’s back up for a second though, before we dive into the minigames. Chimparty plays out like a regular 4-player board game, in which up to four human players compete with each other and any unoccupied spots get filled in with AI opponents to make sure all minigames get played with four characters. Playing and winning minigames moves you up the board, ever closer to the ultimate rewards – a whole bunch of bananas.

Sounds like a pretty simple board game for kids, but it’s a slightly flawed concept when you see how it plays out. Skill doesn’t really matter, because no matter how well you do in the minigames you’re not likely to move ahead of the pack by much. The player who lags behind also gets a bonus roll, which can even result in him or her overtaking the leaders (as you get to go to the next square if you land on another players). 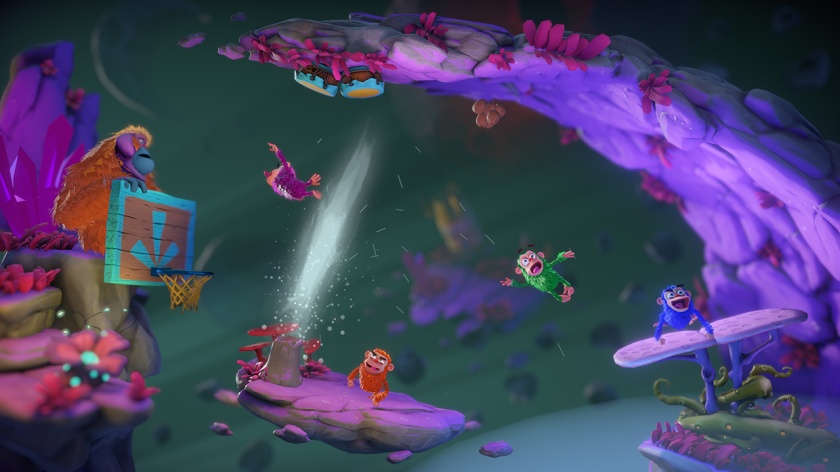 This makes the board game little more than a hollow shell for the minigames, which would have been fine if those were all excellent in how they’re implemented. They’re not, even though there’s a few fun ones in there. My main issue with the minigames lies in a mismatch between the control system and the game you’re playing, as some are very much like mobile titles while others constantly have you thinking “this’d be so much better with a gamepad”. Playing an endless runner that just requires you to jump at the right moments is a great fit for Chimparty’s one button control scheme, and I enjoyed the games that require careful timing as well (to get the angle of a throw just right, for example), but trying to exercise some kind of direct control over little chimps running around the screen definitely feels cumbersome.

Chimparty does have a good number of games in it with 18 different ones to choose from, most of which have decent alternate variants as well. It shows that the mini/partygame collection can definitely work on the Playlink system, but it falters a little in its execution. Other Playlink titles, including recent ones like Melbits World, demonstrate how simple and intuitive touch controls can be on the platform, but not all of Chimparty’s minigames subscribe to that notion. Kids will definitely still have fun playing around with the game and it looks wonderful, but ultimately it’s a somewhat flawed experience and we’re still waiting for the first great minigame collection on the PS4.