We take a look at Warner Bros’ next superhero blockbuster, as Aquaman comes ashore for an assault on moviegoers’ wallets this holiday season. We attended a screening for the movie that featured 4DX technology to enhance the experience – here’s our review.

It’s been an interesting year for superhero movies, as one of the year’s best and most successful movies was Avengers: Infinity War. A showcase for how the genre has matured over the past decade, its blended (and sometimes even highly emotional) great storytelling with amazing visual effects in two and a half hours of pure entertainment. Aquaman more or less follows the same patterns, but doesn’t quite soar to the same heights at this year’s biggest Marvel production.

Aquaman most closely resembles Avengers with its grand visual spectacle. Largely taking place under water, expect plenty of blue/aqua hues throughout the movie, nicely interwoven with land-based scenes that provide plenty of color and contrast – the scenes that take place in Italy are a great example of that. The explosive action, both in the sense of one on one combat and in grand battles, make up the meat of the movie though – especially when viewing with 4DX, but more on that later.

The movie starts off by showing us how Jason Momoa’s Aquaman was born – through a union between a (human) lighthouse keeper and Atlanna, the queen of Atlantis (a Nicole Kidman role). When we fast-forward to the present age, we quickly see a conflict unfold between two worlds – that of mankind, which has been ruining the ocean with its pollution, and that of the underwater kingdoms. Aquaman is right in the middle of the two, destined to bring them together because of his heritage (a theme often explored in popular culture). His half-brother Orm (Patrick Wilson) has his own agenda on the matter though, as he seeks absolute power and vengeance – on mankind as well as on Aquaman, who he blames for his mother’s exile and presumed death.

Aquaman’s story is one of strife, lust for power, love, jealousy and responsibility – and it’s told through an abundance of action. The special effects are excellent, with wonderful set and creature design – many of the underwater soldier “ride” giant seahorses or great white sharks into combat and there’s a giant Kraken-like creature called the Karathen – surprisingly voiced by none other than Julie Andrews. There are other surprising casting choices as well, with action star Dolph Lundgren appearing as king Nereus. It fits with Lundgren’s recent trend of no longer just limiting himself to low budget action movies and instead picking supporting roles in franchises like The Expendables, Creed and now Aquaman. 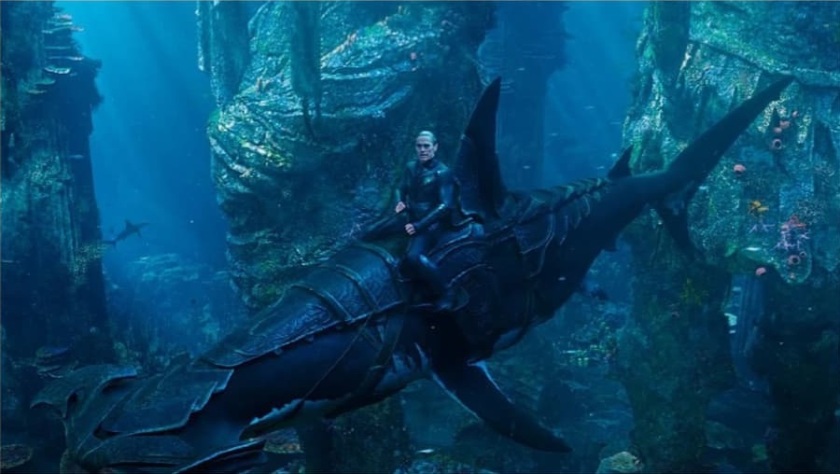 Momoa’s acting isn’t as refined as that of some of his Marvel counterparts – or Willem Dafoe’s, who’s also in Aquaman. It doesn’t hurt the action-centered spectacle that is Aquaman, but it also means the movie never rises to the level that Infinity War achieved. Amber Heard and Dolph Lundgren are fine, but they’re not Cumberbatch, Ruffalo or Downey Jr. in terms of the depth they provide to their characters.

The movie’s a true showpiece for 4DX technology though, which adds motion and strobe lights to the experience – but also wind, snow and rain. In such a water-filled tale, the wind and rain make all the difference. From the drizzle in the opening scenes right down to the heavy storms on open sea, it almost feels like you’re there – an effect that’s enhanced by the use of smells, which translates to the sensation of salty sea air whenever the action movies topside.

If you get the chance to see it in 4DX, then definitely try and see Aquaman that way. It’s not the year’s best superhero movie by quite a margin, but it’s certainly one of the best thrill rides that cinema can deliver in this day and age.