A first person puzzle adventure from Iceberg Interactive, The Sojourn releases today on PS4, Xbox One and PC (through the Epic Games store). It was developed by Shifting Tides, a small UK based studio. We tested the PS4 version for this review.

Prior to our review, we met with Iceberg and Shifting Tides for a first hands of the game – but this was back in the summer of 2018. We enjoyed the demo and were eagerly anticipating more time with the game, but things kind of went silent after that. The game didn’t appear at E3 or Gamescom this year either, but shortly after it was announced that it would be releasing very soon – and here we are.

The Sojourn is a first person puzzle game that takes inspiration from the likes of Q.U.B.E. and The Talos Principle more so than it is based on Portal – which really kickstarted the genre. The biggest difference is that The Sojourn is much more of a slow-paced experience, and even though there is subtle platforming elements it’s a game that you can enjoy at a leisurely pace, figuring out what to do next step-by-step or by standing around and figuring out the whole solution at once.

The Sojourn’s general tone is enhanced by the almost philosophical nature of its narrative and its dreamlike visuals, which feature distant vistas, cascading water and foggy areas. The actually narrative seems somewhat detached from the gameplay in how seemingly thought-provoking it is so it often misses the (seemingly intended) mark, but it’s easily forgiven as you focus your attention back to the gameplay at hand.

The early phases of the game, which were also shown in that demo a year ago, do a great job of gradually introducing The Sojourn’s mechanics. You can switch between dark and light worlds and changing something in one world also affects the other one. There are spots you can teleport between, and doing so might make it possible to reach a marker before time runs out and you fall down a bridge that otherwise disappears from underneath you. 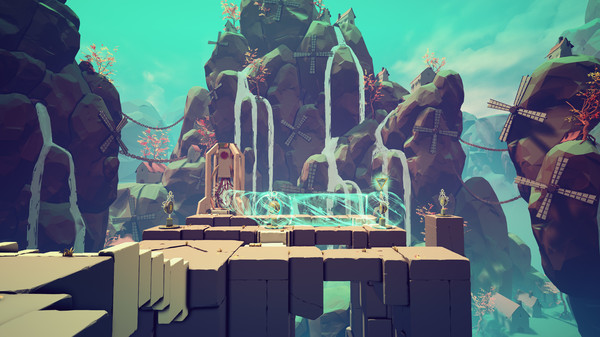 The Sojourn is wonderfully paced in this sense, slowly introducing you to its basics and getting you ready for what is a rather lengthy adventure. While a ten+ hour campaign is claimed, you can get through the game in less than that – but there are optional challenges that are a lot harder to complete and will push the game well past that ten hour marker. This also plays into the game’s replay value, because taking the easier route the first time opens up the chance for another go at it with more challenging puzzles a second time.

While the narrative text can feel disjointed from the gameplay, the visual story elements are nice and mostly told through statues that depict various the stages in life that you pass through during the game. And speaking of the game’s visual style, I thought that The Sojourn was gorgeous to look at. Levels build themselves up and transform in real time as you move forward, and these transitions are often spectacular to look at. The visual theme also changes between the various worlds in the game, but over the course of the campaign there are only four chapters so these changes don’t come that often.

The actual puzzle gameplay in The Sojourn isn’t revolutionary in and of itself, but it’s been well crafted with different elements being slowly introduced and branching paths to offer more or less of a challenge. While first person puzzlers are plentiful on Steam, console owners aren’t spoilt for choice, and this is my favorite in the genre since Q.U.B.E. 2.