Typhoon Studios’ debut title Journey to the Savage Planet is launching this week for PS4, Xbox One and PC. After a hands on session last year we were eager to discover everything the game had to offer – which we did using a Playstation 4 Pro.

My expectations for Journey to the Savage Planet initially went in a completely wrong direction – the title evoked memories of movies like Forbidden Planet and Journey to the Center of the Earth, but rather than offering a thrilling action adventure this is a game that’s mostly focused on exploration and discovery. It’s also a game that’s far more open than I had expected, giving you a lot of freedom to uncover its world and its secrets.

I’ve heard plenty of comparisons to Metroid Prime and No Man’s Sky from people, and while I see the resemblance (especially in the visual sense when looking at No Man’s Sky) I do consider Journey to the Savage Planet to be its own and rather unique thing. As a scout of sorts, you arrive on a strangle planet dubbed AR-Y26. You work for Kindred Aerospace, which as a company is introduced in a “things might go wrong” kind of way with plenty of humor – a fun undertone that carries throughout the entire adventure.

Once you leave the confines of your ship (that’s in need of repairs), you quickly start exploring the alien world around you – which is filled with colorful flora and fauna. You get waypoints and some hints and objectives through an audio connection, but things never seem to be ‘on rails’ and there are plenty of things to find when you go off-‘script’ for a bit, which is nice. There’s an option to play the game cooperatively as well, which I assume is a fun way to divide up objectives and discovered, but we didn’t test this out yet.

Exploration is rewarded in numerous ways, many of them not tied to the main narrative. You can scan objects in the environment to create a bit of a compendium of all things AR-Y26, which I found helps when you hit a dead end because you decided to explore an alternate route to a waypoint that didn’t pan out. Instead of becoming frustrating, Journey to the Savage Planet always gives you something to do and you can do so at your casual pace if you want to. 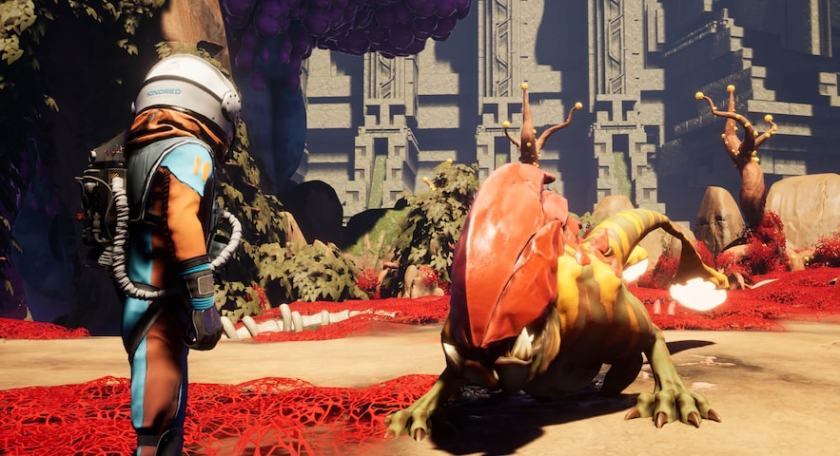 The game’s not a leisurely stroll though – there is combat involved as well, but I had the most fun when I wasn’t using my space blaster but instead manipulated the environment to set traps or hurt unsuspecting enemies. For both combat and traversal you can also use special abilities, some of which won’t unlock until later in the game but which all offer new ways to interact with the world you’ve gotten to know. I supposed this is ‘Metroid’ type of influence, but my take is that in Journey to the Savage Planet this isn’t a mechanic to move forward but rather a new avenue of discovery – at least in most cases.

Regular combat doesn’t feel great when compared to other first or third person action games – the fact that many of the aliens you encounter are simple gun fodder doesn’t make it too exciting, but it doesn’t take long to realize this was never developed as a shooter anyway. Instead, it’s much more fun to get creative, both in combat and in the crazy ways you can traverse the world – especially once you unlock the grapple hook.

I might not remember much about Journey to the Savage Planet’s plot in about two years, but I’ll certainly remember it as a quirky title that dared to be different and one of the most fun exploration-centered games I’ve played so far.