The eagerly anticipated Arc of Alchemist by IFI and Compile Heart is out now for the Nintendo Switch and Playstation 4. Is it worth picking up?

Of course we know Compile Heart from their work on the Hyperdimension Neptunia series which features plenty of smart and entertaining writing that’s made us fans of the series. Even though it’s still an RPG, Arc of Alchemist was going to be something different, so we couldn’t wait to see how it turned out. The short of it is that it’s hard to imagine this will be another Compile Heart classic, but it’s still entertaining.

What makes Arc of Alchemist different isn’t just that there’s a new narrative scope, it’s that the game is more action-oriented than other games from the developer have been. There’s also a larger role for base building than you’d typically expect, making for a unique blend we don’t often see in RPGs. 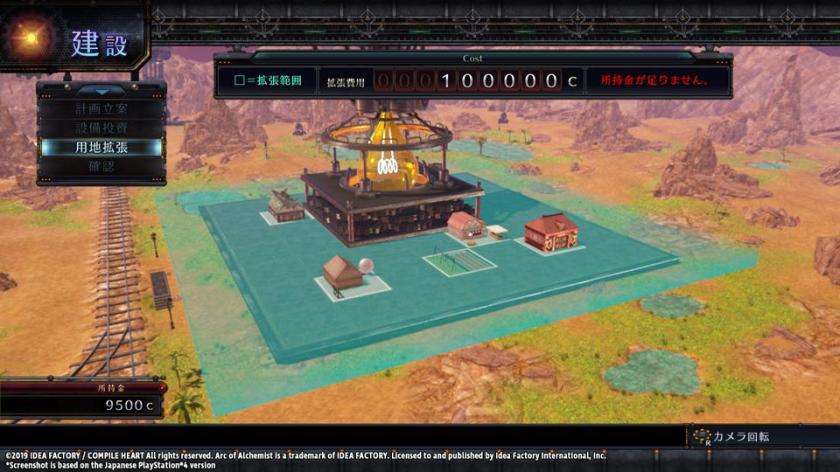 The story of Arc of Alchemist casts you as Quinn Bravesford, an army captain whose job it is to lead her soldiers on a quest to find the “Great Power”, a legendary device that can save humanity. In order to use it no fewer than four magical orbs are required to do this – but their existence borders on the mythical so even you are doubtful they actually all exist. You possess one of them though, and your quest is under a bit of time pressure. A rivaling kingdom is also setting out for the desert to find them, an area which is home to other dangers as well.

The game unfolds as an action RPG of the hack and slash variety (complete with loot) that does away with the traditional turn-based formula of JRPGs. It keeps the same visual style though, which makes for an interesting crossover experience when you engage in combat and you see hit points flying off your opponents (and/or yourself). Arc of Alchemist isn’t exactly a step forward for the genre in the audiovisual sense though – the graphics feel dated and would have been considered unimpressive even on a PS3 due to fairly bare environments and a low level of detail. The character models are a pleasant exception to these, with HD depictions of colorful and cartoon-like heroes. Ni No Kuni, however, this is not.

The gameplay experience isn’t just about ploughing your way through countless enemies out there in the desert though – you’ll frequently return home where you work on your base and boost your party’s abilities. These two actually go hand in hand as well, because smart building placement will grant you bonuses in the shape of getting more access to supplies. This creates a nice dynamic through which you grow your party, and provides a nice break in between the sections where you engage in combat.

The combat itself is fairly basic in nature, with just two attack buttons and a special attack to help you take down your foes. You can also jump and dodge, as well as rely on your teammates, but for a Compile Heart game there’s very little strategy involved. I suppose this could be considered a plus for those wanting an accessible RPG experience, but JRPG enthusiasts might be put off by this as well.

Traversing the world becomes fun when you start finding those fabled orbs, which turn out to possess the power to control the elements. Although this doesn’t drastically change combat, it does affect how you get around the world. Obstacles can be removed with the right orb, or a new place can be accessed if you manipulate the environment to get there. How and where to use the orbs is usually fairly clear, and I wish the game had more puzzles that made use of this interesting mechanic.

Arc of Alchemist is different, and it’s accessible, but its lack of depth also makes it feel a little repetitive despite the interesting interplay between hack and slash on the one side and base building/party management on the other side. It’s definitely not bad, but we’ve seen better from Compile Heart.