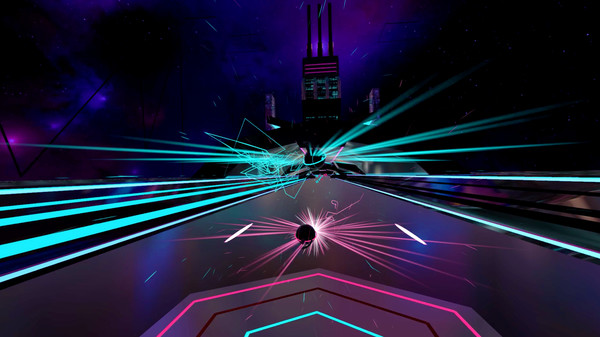 Synth Riders, by Kluge entertainment, recently added a multiplayer update to the game. It’s out for the Steam VR version as well as both Oculus versions – we booted it up on an Oculus Quest to test it.

We missed out on the release of Synth Riders when it first came out (back in November), but having recently started playing around with a Quest headset this felt like a great chance to jump in. We’re glad we did, because it turns out that Synth Riders is one of the better Quest titles we’ve tried so far and even gives system sellers like Beat Saber some long-overdue competition.

Its gameplay is hard not to compare to Beat Saber, but it’s a different game with a different emphasis. Where one is all about slashing and hitting targets to the beat, Synth Riders is much more of a ‘flowing’ experience, creating the sensation of a dance rather than a drum session. It feels less intense, but as a result there’s more of an opportunity to take in the music while you’re playing.

One gripe I have with a lot of present-day music/rhythm-based games is that the soundtrack isn’t too familiar – for obvious (licensing) issues. Synth Riders does a great job in this regard as well, because on top of the included tracks (which are good, but were all new to me) you can also import user-generated levels/songs – which is where I’m spending most of my time these days.

What the new update brings is the ability for players to come together in lobbies and play with up to five players at once and compete. You can play both the original songs and the custom ones you add to the game, and voice chat allows you to communicate with each other as well. With the ability to constantly discover new user created songs, this is a lovely update that allows players to exchange tips, recommend songs and keep playing.

Synth Riders definitely deserves the acclaim it got at launch, and the game just got better. Now hold on while I add “Take On Me” to my playlist.