Over 25 years since the first game, Beyond a Steel Sky is a direct sequel to Beneath a Steel Sky, a classic adventure game by Revolution. Previously released as a temporary exclusive to the Apple Arcade platform, it’s now available on PCs through Steam as well.

When I think of the grand era of adventure games, my thoughts go back to the many classics produced by Sierra and Lucasarts. But while studios like Pendulo and Telltale didn’t emerge until later, there was another name that was synonymous with excellence within the genre – Revolution. Their breakout title Lure of the Temptress was an enormous hit during the twilight years of the Atari ST and Amiga, and the follow-up was perhaps even more iconic. Beneath a Steel Sky used CD-ROM technology to introduce speech and high quality music, convincingly portraying a futuristic world in a way that hadn’t been done before in the genre to that extent.

I believe Beneath a Steel Sky also endures because it was made available for free (!) by Revolution years later, and the ScummVM emulator allows you to play through the game on pretty much any modern device that supports emulators – even a smartphone. It stands as a classic in the adventure game genre, and the announcement that Revolution was working on a sequel was one of the most exciting bits of news for genre fans in recent years.

Of course we’re 26 years on, and it was always going to be hard for Beyond a Steel Sky to make an impression in the technical sense like the first game did. That’s not to say that this isn’t a good looking game though – its visuals being a blend of the first game, Telltale’s visuals in their Walking Dead games and the cell-shaded science fiction environments in Borderlands. Ensuring that everything feels faithful to the original is the involvement of comic book legend Dave Gibbons, who once again helped shape the art style.

The biggest change is that Beyond a Steel Sky is no longer a 2D point and click affair, having made the switch to fully realized environments in 3D instead. This also greatly affects the gameplay, which doesn’t involve clicking where you want to go but instead gives you full control over returning protagonist Robert Foster. You can stick to WASD keyboard controls and mouse clicks for this, but the game is also optimized for gamepad controls – which is the best way of controlling the game if you’re planning on playing this on a big TV – which looks great thanks to the support for 4K visuals.

Beyond a Steel Sky sees Robert Foster returning to Union City, which towers over a wasteland. You’re looking for a child that went missing, and your first challenge is actually getting into the city. As with many adventure games, both classic and modern, this means navigating an area, talking to people, collecting and combining objects and overcoming puzzles. Once the city opens up to you, you’ll find yourself repeating the pattern – emphasizing that although the game looks and controls a bit like a Fallout title when you’re walking around, it is still very much a classic adventure game at its core. 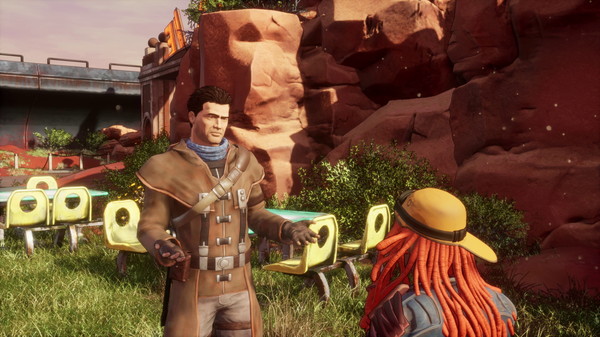 The game is fully voiced, and features that familiar mix of light-hearted humour set against the backdrop of a more serious core narrative – evoking chuckles here and there even though you’re dealing with a kidnapping case. The way the narrative progresses also evokes many memories of the past, for better and for worse. You might miss that elusive item that you need, or you might not think to combine it with something because it didn’t occur to you as making much sense. It’s very typical adventure gaming fare that old school genre enthusiasts are likely to forgive, but might frustrate relative newcomers.

Despite the ability to get stuck for a while, the experience feels more streamlined than the first game did, mostly because puzzles and areas aren’t that complex once you get beyond the city gates. Though you’re free to move around within each “hub” area, progression through the story is mostly linear and there’s little chance of wandering off and being completely lost as you’re looking in the wrong places. Puzzles are similarly hard to mess up, although hacking various robotic interfaces never ceases to be entertaining because they’re implemented in such diverse and organic ways.

A worthy successor to a classic adventure game, Beyond a Steel Sky is a game that fans of the original will certainly want to play. Once you move past its new exterior, the wit and style of the 1994 classic shines through quickly and brightly. It’s too streamlined in some places while asking for obtuse solutions elsewhere so it’s not perfect, but it feels befitting of a modern day homage to a classic game and genre.