After recently playing SOMA again, I couldn’t wait to play Frictional’s return to the Amnesia franchise in Amnesia: Rebirth. It’s out for consoles and PCs, and this review is based on the PlayStation 4 version.

When I played SOMA this time, I did so using a big screen hooked up to a surround sound system – a combination that really elevated the experience because of how Frictional Games approaches their gameplay design. Dimly lit corridors, an atmosphere of dread and creaking sounds all make you feel like you’re constantly in danger, and every little thing that happens on-screen makes you feel like your life is about to end violently.

It’s a formula that translates perfectly to Amnesia: Rebirth as well, even though the setting is completely different. You crash land in the middle of the desert in Algeria, and amidst the wreckage you set out to find both your fellow passengers and a way out of the challenging conditions that the desert offers. At the same time, you’re also haunted by visions you can’t quite explain, as your memory seems to be failing you, and to make matters worse you also quickly discover that horrible creatures are lurking in the shadows all around you. 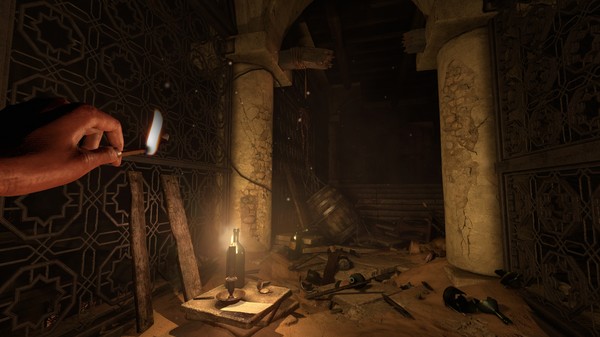 Protagonist Tasi Trianon is an archeologist, and unlike a certain archeologist that rocks a whip you’re not adept at combat. As a result, confronting enemies is never a good idea – you’re always better off just hiding in the shadows or running away in case you’re seen. While this may not appeal to those who enjoy action adventures, it certainly adds to the sense of fear and dread that the game instills, which is further enhanced by Tasi’s own internal demons, as her suppressed memories tend to pour out the more scared she gets. She makes things for scarier for herself by hearing and seeing things, and it’s a sense that translates effortlessly to the player.

Obviously, the scares aren’t just in Tasi’s mind – the world design is genuinely terrifying as well. Amnesia: Rebirth doesn’t just let you wander endless stretches of sand in the desert, but has you going underground in long-abandoned (or are they?) burial tombs, dig sites and cave systems. There are naturally dark, making you rely on your lantern and matches for any kind of light. They’re also claustrophobia-inducing, and upon hearing (or even seeing) creatures that are hiding in the dark you can’t help but feel you have nowhere to go if they decide to attack you.

When they do, the result is a little underwhelming, since Tasi can’t die or even get hurt. She struggles a bit with the enemy, then runs back to what is essentially your most recent checkpoint. There is little punishment that comes with failure from that perspective, and even though the excellent audiovisual presentation and pacing makes sense that you stick to the shadows it’s a tad too easy to just accept defeat and try again, taking a bit of the suspense out of your confrontations – especially when tackling them more than once. I suppose that death would also be followed by a reload of a save game or checkpoint, but at least I would feel like I was trying to escape death rather than a relatively minor inconvenience.

The pacing of Amnesia: Rebirth is wonderful, as long as it clicks. Tense and horrifying sequences are mixed with sections where you can have a bit of breather as you try and overcome some kind of obstacle in your way, but at times these sections could use a bit of signposting. When I quickly found the solution I felt I had had enough of a break from the terror to be able to continue, but at other times I was just wishing I could get past a puzzle in order to move on with the adventure. I would have definitely liked an (optional) hint system here, one that would tell me (perhaps through the voice of Tasi talking to herself) what I could possibly try or where I might look for something to help me. SOMA had better signposting than this, and although I realize that feeling “lost” adds to the terror it also can lead to frustration if the feeling lasts too long.

Ultimately, from the perspective of a heart-pounding experience of terror, these are relatively minor issues. Amnesia: Rebirth could very well be the scariest title to come out during the Halloween season, and fans of the genre as well as those who enjoyed the first game shouldn’t miss out. If you have the ability to play with headphones or (even better) a surround sound system, do it!