As a surprisingly lighthearted take on being evil, Rebellion’s Evil Genius 2: World Domination gives PC gamers a fun new management/strategy sim to play around with – here’s our review.

These are certainly fun weeks if you’re a fan of PC gaming and enjoy older IPs being revived. After Startopia was brought back by Kalypso, Evil Genius 2 is next – a sequel to a 2004 game I wasn’t expecting to receive a follow-up at this point in time. As with Spacebase Startopia, I was wrong – but I’m glad I was.

Part of why I wasn’t expecting a sequel was that I always considered the first game to be loosely based on Dr Evil from the then-popular Austin Powers movies, letting you build your own evil empire/lair without ever taking yourself too seriously – and thus never feeling truly evil while doing your evil deeds. Evil Genius 2 proves that the franchise can stand on its own two legs as well, staying mostly true to the original game and definitely so in spirit and personality.

You’ll see that in the game’s cartoon-like art style, which also translates to your protagonist as you build up your secret lair and aim for world domination as you strive for an all-powerful weapon while bossing your servants around. The game mostly resembles a base builder, complete with the ability to build walkways, traps and defenses and of course the rooms that keep your machine of evil powering on.

In gameplay that echoes Dungeon Keeper a little bit, you craft much of your lair by digging away at rocks to enlarge your underground home. Gameplay mechanics are extremely well laid out for you through a tutorial scenario that sets the base both in gameplay and (comedic) undertone. After that, the game unfolds more like a sandbox title than an objective-driven affair, which is great for replay value as you get access to a lot of ways in which to build and utilize your headquarters.

Which way you go depends on the choices you make in terms of research and how important you believe that guarding your base is while you’re heading out to make the world yours. The latter aspect is handled through schemes, during which you send some of your minions out into the world to go and commit crimes or sabotage the more well-meaning citizens of the world. Because your actions attract attention (or ‘heat’), the end result is usually a balancing act where you do your best to make sure the balance always tips in your favor. 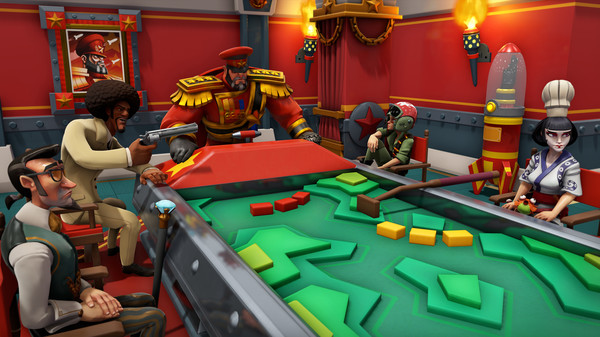 What no doubt helped my enjoyment of Evil Genius 2 was the stellar presentation. Characters are often delightful caricatures of familiar stereotypes, and this is true on both sides of the conflict. The voiceover talent includes the likes of Brian Blessed – who is still a great character actor in a comedic context, 40 years after Blackadder. Samantha Bond is also present, whom you might remember as Moneypenny in several James Bond films – some apt casting there.

It all carries over to the gameplay as well, where even the rooms and traps you build seem to have a personality. When an enemy agent falls into your well laid-out trap, the cartoon-like way in which they’re taken down is ever so fun to watch. Even your workers can have individual personality traits, and it can be fun just to watch them do their thing and/or get angry. But perhaps the best thing, over all that shine on the surface, is that Evil Genius 2 also features well laid-out and diverse mechanics that are certain to entertain for a long time to come. As per the norm with Rebellion, post-launch content is already in the works – bring it on!