Just before the weekend, we wanted to highlight a trio of interesting new releases – two of which are brand new games for the Oculus Quest: ForeVR Bowl and In Da Hoop! We’re also looking at the Civilization VI Anthology collection that just launched and offers great value for money.

Some of the most fun VR experiences have been games where you simply mimic an activity you can actually do in real life – from playing table tennis to climbing mountains, though the latter is not for everyone. ForeVR Bowl on the Quest takes bowling and turns it into a pretty good VR game thanks to a range of interesting features, some of which were added post-release.

Let’s go back to what makes a game like this work though – motion controls. Bowling was pretty big in the Nintendo Wii days, but it was obviously a very crude representation of the sport thanks to very inaccurate motion controls. With the Oculus Touch controllers, that’s a thing of the past, because from swinging your arm to the angle you hold your hand at, ForeVR Bowl feels a whole lot like actual bowling – bar the weight of a ball in your hands.

Roomscale makes this experience a lot better, as you can properly line up your shots that way. Thanks to a new update, you can even use smooth locomotion (as opposed to the teleporting and click turning of the original release), and it’s pretty immersive to be able to throw a ball and then go over and pick up the next one as it comes back to you. If you like customization, then you can even select your choice of balls to play with – the game has a few very cool ones with lighting and animation effects.

The controls are super intuitive to anyone who’s ever bowled before, and there’s a good selection of off/online modes. You can even unlock additional content in the shape of balls and stages, and a really cool feature is the in-game jukebox that was added – which plays your own choice of music through youtube! The sound is what you’d expect, though different locations all have their own atmosphere as well, ranging from how their look to licensed music – including some big names like Eye of the Tiger. The music selection is limited, but the aforementioned jukebox fixes that, and if you’re like me you can spend hours just fiddling around with your own playlists.

Unlocking every bit of content feels like it will take some serious time though, which is a shame, but it’s not content that you’re missing out on. The game’s a lot of fun right from the get-go, especially when played with others in a friendly game of online multiplayer. The controls are accurate, the atmosphere is fitting and well realized, and post-launch updates like free locomotion and more control over the music all change the game for the better. Highly recommended.

Another VR take on a real life activity is In Da Hoop! from Realcast, which takes basketball and reduces it to something not too unlike that classic arcade game where you have to throw balls into a hoop. There’s a standout feature though, and it’s that In Da Hoop! supports hand tracking, eliminating the need for controllers.

If you’ve been around VR gaming for a while, then you might remember NBA 2KVR, which was essentially a shooting simulator rather than a VR version of 2K’s acclaimed basketball games. In Da Hoop! isn’t that different, but was created with that classic arcade feel from the outset, rather than being a poor substitute for some NBA action. In other words, this one wants to create a fun game, rather than a VR version of a sport – and it largely succeeds.

You can engage is the actual arcade experience we’ve already referenced, but In Da Hoop! has a range of different gameplay modes to explore and have fun with, and will get online multiplayer as well as additional challenges post-launch. If you feel competitive, you can also engage with the game’s online leaderboards.

In Da Hoop! on the Quest features support for the Touch controllers, which works well but does break immersion a bit – pinching a single finger isn’t the same as gripping an actual basketball. This is where the game’s support for hand tracking comes in, which as you’d expect isn’t perfect but is a whole lot of fun. It takes a bit of getting used to because the Quest will (obviously) only track your hands while in range of the headset’s cameras (so you can’t just remain fixated on the ring), but after that small learning curve it’s a lot of fun to throw round after round – and it’s a great experience for those not used to videogame controls as well.

As a casual VR experience, this is among the most fun titles you can grab for the Quest – it has the kind of appeal that Headmaster also has. The biggest thing holding back the game right now is a relatively lack of content and diversity, but the developer’s already promised more will be added post-launch. It’s worth pointing out that the game is in the AppLab for now, which makes sense at the Steam Early Access equivalent of the Oculus store. Definitely one to watch though, and already worth jumping into.

We rarely cover bundles that aren’t re-releases or remasters, but 2K’s recently released Civilization IV Anthology offers too good of a deal to ignore. It’s currently only available for PCs on Steam and Epic, but will make its way to consoles later this year as well.

Included in the Anthology are the base game as well as all of the expansions released thus far, including the major expansions Rise and Fall and Gathering Storm as well as the New Frontier Pass, which over the course of this past year gave us new content drops that focused on individual civilizations/countries and their custom scenarios. 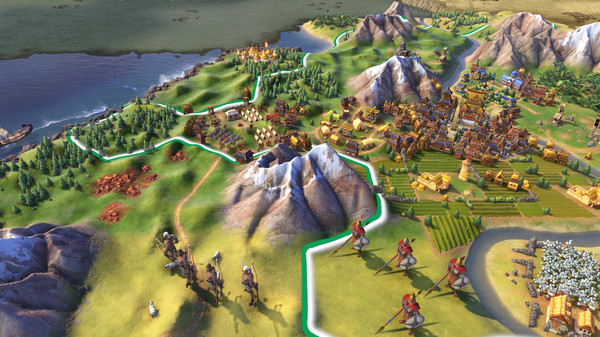 If you jumped on every Civilization VI release thus far when it launched, then you’ve likely spent about $150/€150 on game content already. It’s been money well spent as Civ VI has been one of the defining strategy titles for an entire generation, but if you managed to hold out then this would be the best time imaginable to jump aboard – the Anthology is being launched at a special introductory price of just a third of the total cost of its contents. If you have even a passing interested in strategy games, then you’ll want to check this one out before it expires on July 8th (and a little earlier on Epic – June 24th).